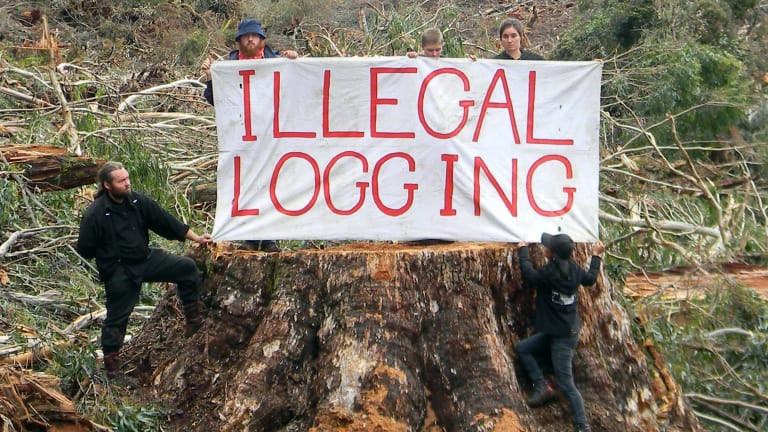 Friends of the Earth Australia affiliate Goongerah Environment Centre (GECO) had a major breakthrough in March. The Victorian the Department of Environment, Land, Water and Planning finally laid charges against VicForests for illegal rainforest logging that GECO reported two years ago. GECOs relentless reporting, monitoring, advocacy and public campaigning for the department to act on a number of cases of illegal logging has finally paid off.

Four serious breaches of rainforest protections in East Gippsland that were reported to the department by GECO were thrust into the spotlight recently by Fairfax media with a February 25 story by Farrah Tomazin in the Sunday Age.

For two of the four breaches that the Sunday Age story focused on, the two-year statute of limitation period has expired. This means prosecutions can no longer go ahead. But just a couple of weeks before the limitation period expired for one of the four rainforest breaches, the department finally acted after intense pressure and media scrutiny. The department is now prosecuting VicForests for illegally logging the Serpentine Creek Rainforest Site near Cann River in East Gippsland. The fourth breach remains under investigation with pressure mounting for another prosecution.

The Serpentine Creek logging operation caused serious damage to protected warm temperate rainforest. Goongerah Environment Centre and the Fauna and Flora Research Collective first reported the logging operation to the department in April 2016. After a near two-year investigation, the department concluded that protected rainforest buffers were logged in breach of the law.

It is the first time the government's forestry regulator has laid charges against the logging agency since the Andrews government was elected, despite dozens of serious breaches reported by the community where regulatory action is yet to be taken.

A directions hearing will be held in the Orbost Magistrates Court on April 19. If found guilty of breaching the Sustainable Forests Timber Act, VicForests could be fined up to $38,000.

Goongerah Environment Centre (GECO) spokesperson Ed Hill said: "We're pleased to see the department carry out their role and enforce the laws that protect our precious rainforests. we hope this prosecution is the beginning of a new approach by the Andrews government and we expect them to lay charges against VicForests for dozens of other breaches currently under government investigation.

"VicForests has shown systemic failure to adhere to environmental protections. Victorians expect that if a rainforest is illegally logged, the perpetrators will be prosecuted. Under the previous Liberal government VicForests were let off the hook after charges were laid against them for logging rainforest in 2012. We hope this time the Labor government will follow through with the full force of the law, in line with community expectations.

"East Gippsland's rainforests are some of Victoria's most priceless environmental assets. Logging in these sensitive forests is leading to senseless and unlawful destruction. The Andrews government must act to urgently protect East Gippsland's forests within this term of government."

Danya Jacobs, a senior lawyer at Environmental Justice Australia, told the Sunday Age: "Time and again we see evidence presented to the Environment Department of serious breaches of rainforest protection laws and nothing is done. Limitation periods to commence prosecutions are allowed to expire with most cases left open, under investigation for years, and no decisions made."