Activist, Zelda Grimshaw, writes a recount of the Disrupt Land Forces event that happened in June 2021 in Meanjin / Brisbane for Chain Reaction magazine. 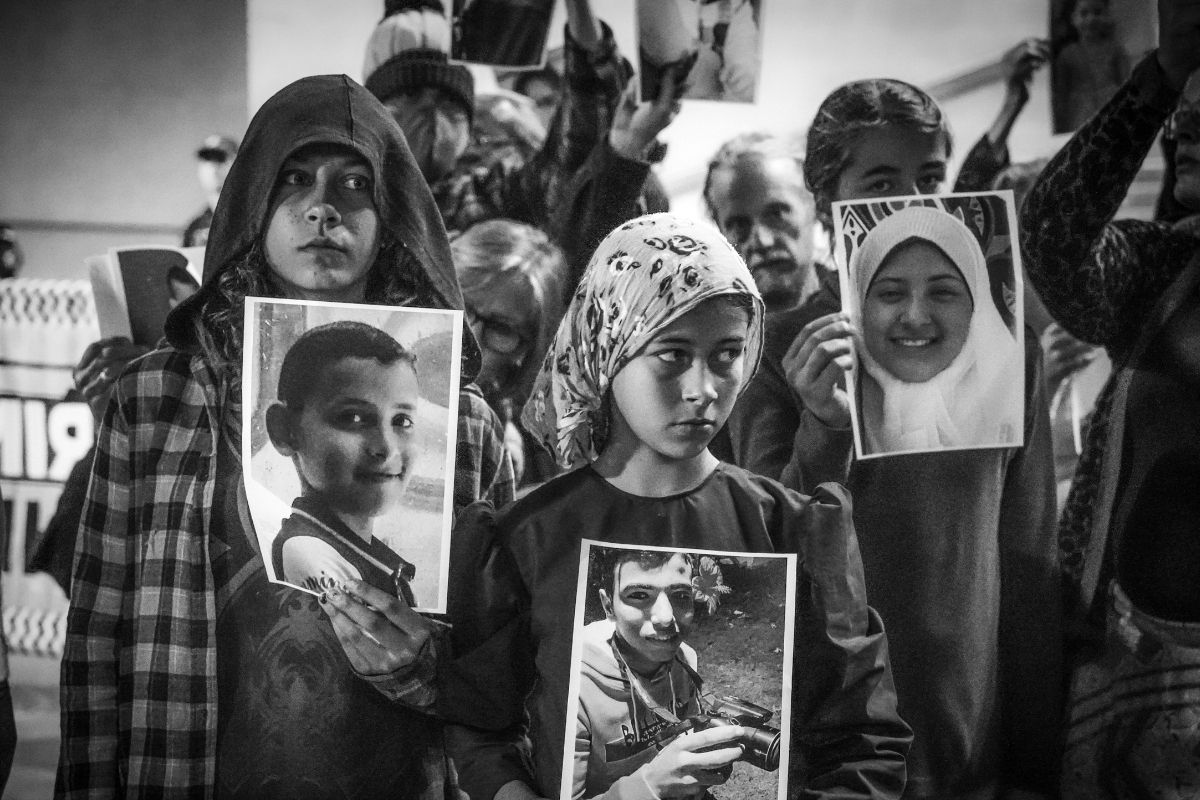 Vigil for the 66 children in Gaza Palestine, held as a part of Disrupt Land Forces

You are the mouldy and fetid remnants of a system in decay, the filthy dregs of an obsolete death cult. You are the scum floating on the cesspool of organised slaughter, putrid parasitic worms sucking life from the earth, you are despicable, drooling, depraved architects of mass murder.

Speaking directly to the profiteers of war as they entered the Land Forces weapons expo in Brisbane last June was highly satisfying.

On the third and final day of the arms fair, the Disrupt Land Forces campaign focused on the intense misogyny of militarism, with our ‘Smash Patriarchy – Taste the Rainbow’ day of action. It was my pleasure to be on the mic for some of that day, to revile the war makers and launch the dancing. I had my favourite people all around me: queer, non-binary, trans and cis friends, artists, elders, kids, carnies, punks, hippies — all styles of peace, climate and feminist activists — some of us refugees, some Australian-born, some First Nations folks, all of us united. The future we imagined together, one full of colour, light, freedom, empathy and love was bubbling all around us, radiant and massive. There on the steps of the Brisbane Convention Centre, as arms dealers, military officials and government trade delegations traversed the long walk of shame before our barricade, we were bringing that future to life. All ages, all cultures, all genders were represented at the barricade, ready to taste the rainbow. My words to the war mongers were fierce; my love for the people around me even fiercer. We danced in the rain and we sang together, raging against one of the most entrenched and widespread systems of human oppression; yeah, the patriarchy.

Disrupt Land Forces was an intersectional, decentralised, antimilitarist campaign run by women. The campaign began late in 2020 and built through 2021 with a series of direct actions, public meetings and webinars that culminated in a seven day ‘Festival of Resistance’ to disrupt a huge military expo at Brisbane Convention Centre last June 2021. Our disruption of the arms dealers began by surprise on May 27, a day earlier than we had planned, when a young woman d-locked herself onto a Ripley cannon mount at the loading dock of the Convention Centre. Three others jumped up and after a few phone calls and a lot of running, a hundred of us were occupying a truck, a tank (a Rheinmetall Autonomous Combat Warrior) and the entire street. It was a spectacular and unexpected launch to our Festival of Resistance. Over the next week we ran workshops, communed by zoom and sacred fire with activists in West Papua, blockaded several weapons factories and for three full days at the Land Forces weapons expo we spoke A LOT of truth to the power of the war profiteers. The police had to bring ear plugs.

Women of all ages and cultures, from refugee, settler and First Nations families, cis and trans together stepped up to smash the patriarchy in a zillion ways at Disrupt Land Forces.  Women ran the legal briefings and coordinated the observer teams. Women ran the dance, theatre, music and printmaking workshops. Women delivered the nonviolence training and led the creative disruption sessions. Women organised vigils, dance parties, brass bands, wild performances, debriefs, court support, protest supplies, a mobile rebel kitchen, a parade, poetry, tank occupations, butoh interventions and cacerolazos. We were so far in the faces of the war makers we even got up their noses.

Feminists have pro-actively resisted conscription, militarisation and the arms trade since Australian women successfully opposed the draft in World War One. Toxic masculinity, sexual assault, misogyny and racist objectification are core values in our military institutions, and they reach their peak in war.  All humans will be better off when we can separate masculinity and manhood from weapons and violence.

End the war on women!

Women and children are the most heavily impacted by war and its toxic aftermath. Today, wars are raging against indigenous peoples in West Papua, the Amazon, the Phillipines, Myanmar, Kurdistan, Palestine, Yemen and Sudan. Rich men get richer through the arms trade, while the poor, the indigenous, women and our children are impoverished, dispossessed and harmed in multiple ways. Let’s end the war on women. Let’s “take the toys from the boys”.

Two senior women, Margie Pestorius and myself, were the core organisers for Disrupt Land Forces. We built momentum for the campaign through several pre-blockade actions between October 2020 and June 2021 at the offices and factories of five strategic targets. Our focus was squarely set on five weapons companies that are both exporting to Indonesia for use against West Papuans, and expanding their footprint in Australia. For future reference, these companies are Boeing, Elbit, Thales, Rheinmetall and EOS Australia. Boeing is the second richest weapons maker in the world ($34 Billion USD from weapons in 2019) and the overall biggest supplier to the Australian government. Boeing sells attack helicopters and ‘counter-insurgency’ aircraft to Australia and Indonesia. Elbit is a recent beneficiary of Victorian people’s money to develop new weapons – which are ‘battle tested’ on Palestinian people — and supplies integrated helmets for Boeing’s helicopters that enable a pilot to focus missiles on a ‘target’ just by looking at it/them. Thales, alleged builder of the alleged $90 billion worth of alleged submarines that Australia doesn’t need, also sells weaponized vehicles to Indonesia’s Special Forces, Kopassus. Rheinmetall sells heavy tanks and the bullets and missiles to go with them to Indonesia, while in Queensland they are leading the push (using public money) to create ‘the khaki state’. EOS Australia makes Remote Control Weapons Systems (RCWS) that sit on top of Indonesia’s Thales vehicles and can be operated with a ‘plug and play’ interface, using ‘fire and forget’ missiles. Tank drivers don’t ever have to look at the people or homes they are firing at — the EOS RCWS makes killing safe and comfortable. Boeing, Elbit, Thales, Rheinmetall and EOS. Remember those names, friends. We’re not done with them yet.

Smashing patriarchy and dismantling the military-industrial death machine are pretty much the same mission.

Whether you see patriarchy as the base material of inequality or as the icing on the cake of colonisation, the ideology of male supremacy is an ingredient in every other form of domination. As campaigners we often focus our attention on a particular expression of power, such as the felling of the earth’s rainforests, the climate lies propagated by fossil fuel magnates, the imprisonment of refugees, or rape in the Defense Minister’s office. It is strategic and important to focus our paths towards peace and justice, to channel our energies, within discrete campaigns, so that we are not living in a state of overwhelm and exhaustion. At the same time, we can recognise that all of the mechanics of destruction intersect with each other. There is no such thing as a single issue. Patriarchy, militarism, extractivism, dispossession, capitalism, white supremacism, climate breakdown – they are all connected.