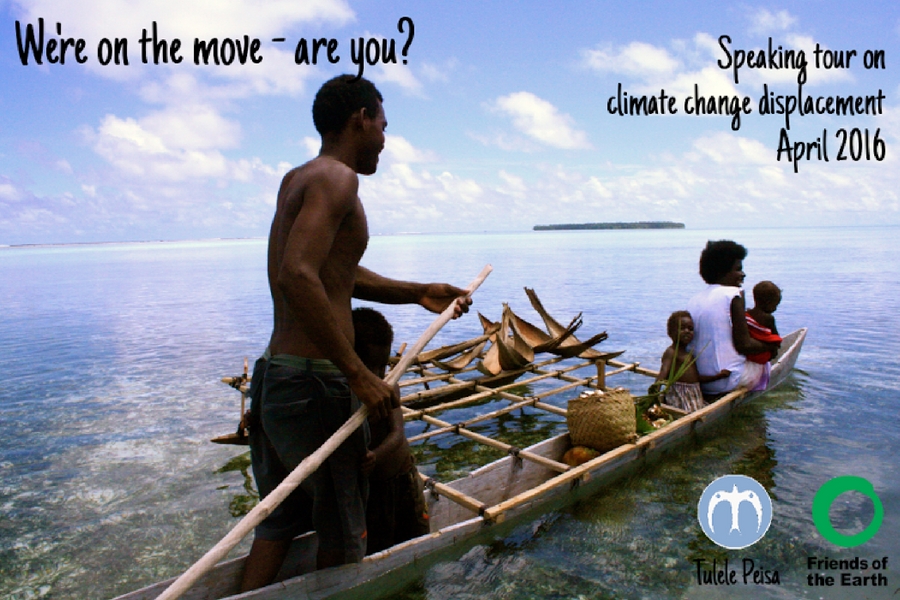 Speaking tour on the climate change precipitated relocation of atoll peoples in Papua New Guinea, and the implications for climate justice in an Australian context

The visiting speakers will be:
Ursula Rakova, director of Tulele Peisa, the Carteret Islands relocation program in Bougainville
Pais Taehu, Chairman of the Coalition of the Atolls – Temarai Association – comprising the four atoll groups within the Bougainville political boundary
The tour, scheduled from 9 to 22 April, will include speaking events in Sydney, Melbourne, and Brisbane.

In 2005, after years of watching land being swallowed by the ocean and crops and water sources contaminated by salt water inundation, the elders of the Carteret Islands decided to initiate a relocation program to mainland Bougainville.  In 2006 they set up Tulele Peisa, an organisation to assist with the relocation process.

An “in principle” agreement was reached in 2007 between the national government of PNG and the Autonomous Bougainville Government to resettle the 6,000 inhabitants of the Carterets and three other atoll groups – the Mortlock, Tasman and Fead Islands – to the large island of Bougainville.  However, no outcomes have been reached to date from this agreement.

The Carteret elders recruited Ursula Rakova, herself from the Carterets, as director of Tulele Peisa, meaning in the Halia language “Sailing the waves on our own”.  It has continued to operate as an NGO, with its programs made possible with donations of land by the local Catholic diocese, and funding from a range of mainly overseas donors.