The extractivist development model has been in place and perpetuated since colonial times. But what do we actually mean when we say something is "extractivist" or "post-extractivist"? Natalie Lowrey and Anisa Rogers provide an overview of the terms for Chain Reaction #143. 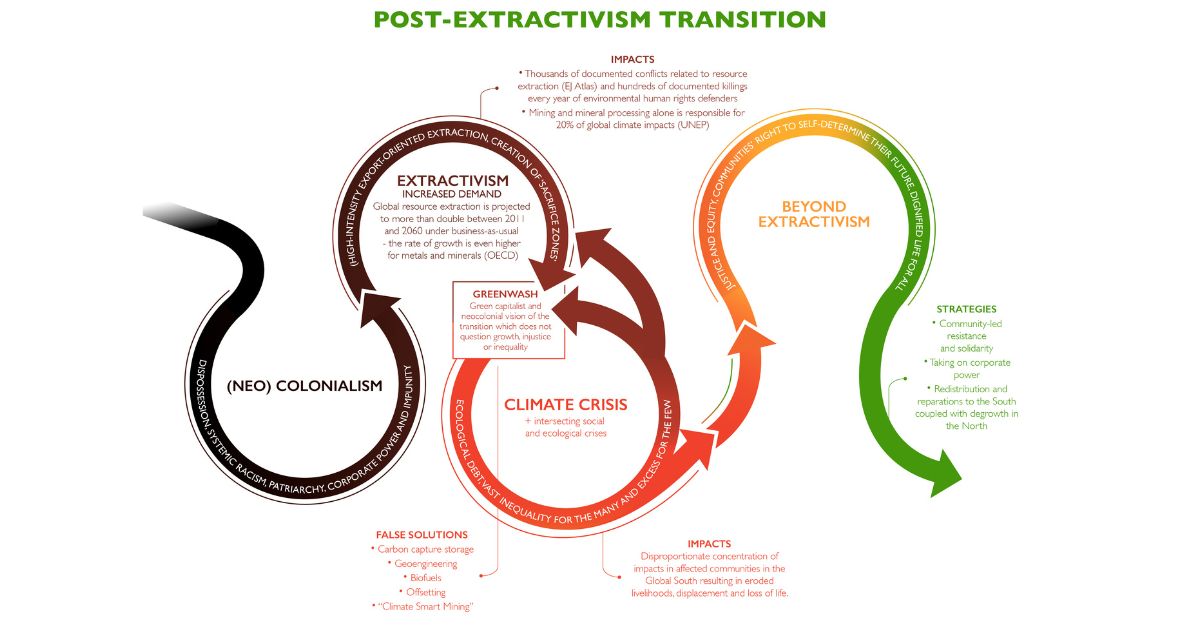 Extractivism is a large concept. Its origins stem from extractivismo discourse which is intertwined thinking from academics and grassroots activists including Indigenous communities in Latin America. Extractivismo centres the lands and communities directly affected by extractive projects.

The first element is the process of extraction of raw materials such as metals, minerals, oil and gas, as well as water, fish and forest products, new forms of energy such as hydroelectricity, and industrial forms of agriculture, which often involve land and water grabbing by the extractive industries.

The second element has migrated and expanded from extractivism origins to also include other extractive logics. These include:

Understanding extractivism means understanding that nearly anything can be extracted: mineral resources, labour, data, and cultures. It is a take, take, take logic, not one of giving.

It is a logic of violence that includes abuses to life, health, land, food, and water; displacement of people; violations of Indigenous Peoples rights; gender-based violence and discrimination against women; criminalisation of workers and human rights and environmental defenders; and the use of military and security forces to protect natural resources and corporate interests.

Extractivism and the growth economy

It is often argued that these problems can be solved through more efficient technology, rather than a decrease in overall consumption. However, continually developing more efficient technology is often subsumed by what is called the ‘Jevons Paradox’, in which an increase in efficiency in resource use generates an increase in resource consumption, rather than a decrease.

Continuing to grow our economy therefore means our ecological impact will also continue to grow.

Those who argue we can ‘decouple’, or separate, our economic growth from environmental destruction, have been proven wrong time and time again. To have a chance at mitigating the climate and ecological crises we face we require a decrease in overall energy use and a degrowth strategy and transition from a consumer society to a simpler, more cooperative, just, and ecologically sustainable society.

Extractivism and the Australian context

The extractivist development model has been in place and perpetuated since colonial times.

This is most often thought of in the framework of a dominant and highly unequal model of development which is geared for the exploitation and marketing of natural resources in the Global South for export to the rich economies of the Global North.

Most of the time, extractivism has created relations of dependency and domination between the providers and consumers of raw materials. However, in the context of Australia, we need to unpack settler colonialism and extractive settler-capitalist economies.

Settler colonialism is primarily about land. The clue is in the name: the settler stays and establishes exclusive territorial sovereignty over expropriated or ‘stolen’ First Nations lands. This ‘logic of elimination’ centres access to land as the primary motivation for elimination.

Settlers—and the settler state—aims to displace the First Nations presence through land theft and genocide so they can establish their own direct connection with the land. This sought-after connection, which has both economic and cultural dimensions, continues to have far-reaching consequences on First Nations peoples in the land they now call Australia.

To broaden this further extractive settler-capitalist economies have been founded in the ongoing processes of Indigenous displacement, dispossession, and erasure – this still stands as one of Australia’s most enduring national features. Australia is a mining state.

Australia also exports this extractvist model and the abuses that go with it to other Indigenous lands and local communities overseas through our corporations, investments, aid and trade deals.

What we need is a new logic, one that overturns the prioritisation of rampant mineral extraction - be it iron ore, coal, gas, copper, nickel or lithium, logging our forests, extracting our waters - this has to be irrespective of any capitalist economic gain.

There needs to be a recalibration of the Australian settler state that properly prioritises First Nations interests over the so-called ‘national interest’. Sadly, nothing in living memory suggests that any government is up to embracing such a challenge. So, it is up to us, the people. We need to stand with First Nations people who have fought against extractivism since colonialism came to this country.

Extractivism is large and to many of us we cannot see a way out of this extractivist mindset and logic.

However, there is an expansive visionary world beyond extractivism, a world of post extractivist circular economies and circular societies that protect cultural and biological diversity.

Where there are national and local systems of care, access to universal basic income, food sovereignty is prioritised, information and communication modes are restored and rooted in society, and there is less production and consumption towards degrowth.

Trainer, T. Degrowth – How Much is Needed?, Biophysical Economics and Sustainability, 2021

Natalie Lowrey is Coordinator of Aid/Watch & the Yes to Life No to Mining global network.

Anisa Rogers is a long-time grassroots campaigner, and a National Liaison Officer for FoEA.