When will we ban new coal mines? #StopAdani 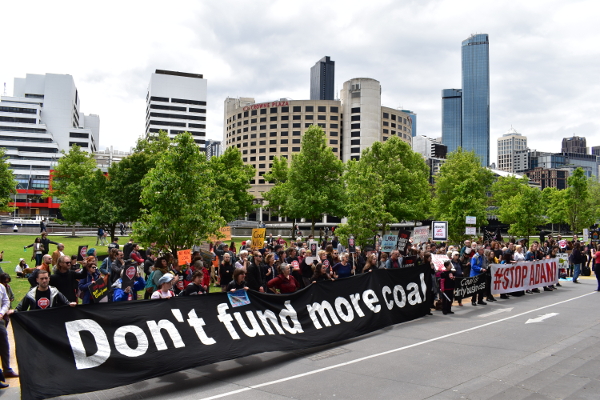 “I just cannot believe that in 2017 we are still fighting the Adani coal mine” begins Stop Adani campaigner Charlie Wood; her gentle demeanor belies the indignation of her words.

It’s the 1st of November  and we’re outside of Australia’s largest mining conference (International Mining and Resources Conference or IMARC), concluding a whole day of community-led actions to call on leaders to act on climate change.

A crowd of several hundred people, ranging from greenies to grannies, showed up to speak directly to the leaders of the Adani company. Adani’s reef-wrecking mine has no social license. The Australian people know too much about climate change and the health effects of coal to let this disastrous mine go ahead.

The action felt fun, with Sully (aka Daniel Sullivan) leading upbeat chants on his trumpet and MC Rev Alex Sangster lightheartedly bantering with the crowd.

Once speeches were over, several people put on bright red lipstick to leave kiss marks on the Melbourne Convention Centre windows, spelling out “Stop Adani” in hundreds of crimson kisses. You can interpret the symbolism of that as you like. 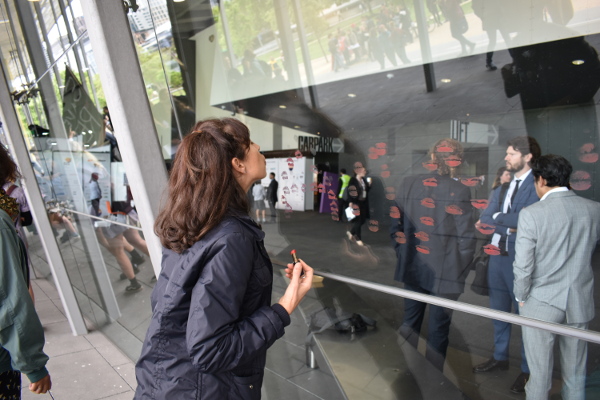 But all in attendance knew that the issue of the Adani coal mine, and climate change, is of deadly importance.

Coal contributes to over 3,000 deaths in Australia every year. Air pollution kills 3 million people globally each year, and burning coal is a key contributor to this.

How can Coalition party politicians continue to tell us that shipping coal to India will help India, when we know the health effects of burning coal?

The Traditional Owners of the land, the Wangan and Jagalingou people, have repeatedly said no to the mine.

And what of climate change? Burning the coal from the Adani mine would cancel out any good achieved from our country’s already weak goals for reducing greenhouse gas emissions between 2020 and 2030. And the mine would lock us into a dangerous cycle of continued coal use for 25+ years.

Many in the crowd believe we need to immediately shut down all coal-fired power plants, immediately transition to renewables, for a safer, healthier planet.

Others are recognizing that old dictum that politics is the art of the possible. They demand at the very least no new coal mines. 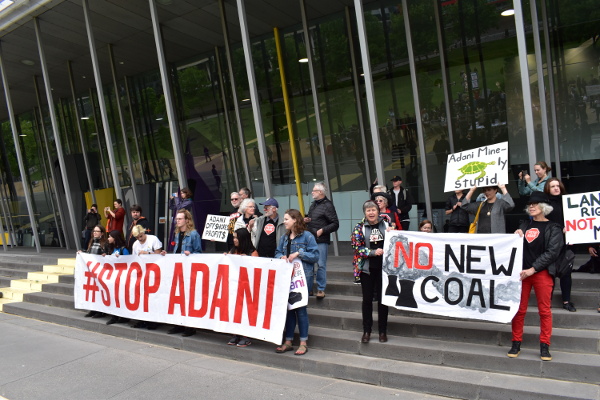 Even in the mining industry, many support not building any new mines. They realise that the market for coal is declining.  Many energy companies are switching away from fossil fuels and towards renewable energy.

The economics of new coal mines are suspicious at best. We could power this country with 100% renewable solar and wind power (see Beyond Zero Emissions study). Why do we not ban all new coal mines immediately?

Instead, the Coalition is actively supporting new coal by lending $1 billion to the billionaire Adani.

This is why the broader picture of the Day of Action is highlighting the dangerous relationship between Australia and the fossil fuel industry. The flagrant injustice of loaning $1 billion to a billionaire, the very idea that our politicians are even allowing new coal mines, is unthinkable in 2017.

Is Australia done with being the world’s quarry? It’s up to us to decide.

If you want to get involved with the Stop Adani campaign through Friends of the Earth, please contact [email protected] or check out our website here