Why do Chinese workers matter? 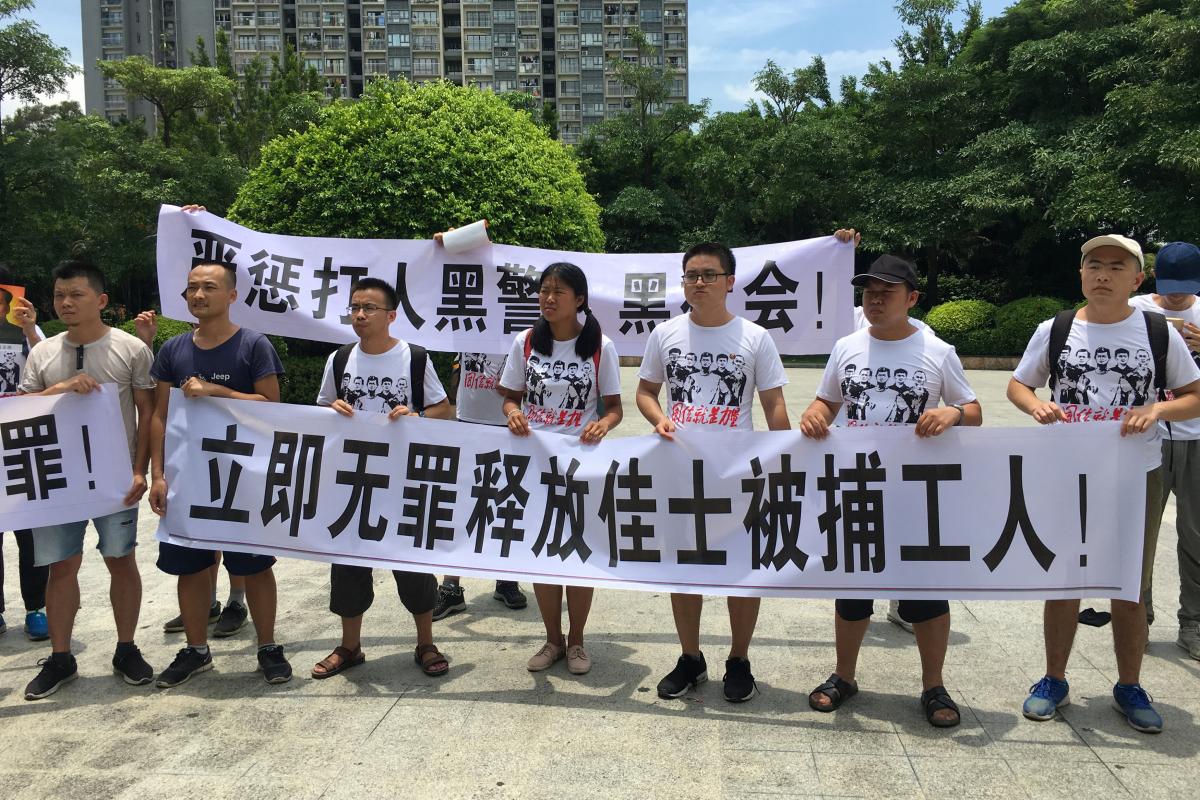 We don't have to look far from home to see injustice and environmental destruction on the horizon. From the pledge of the Tasmania's new Liberal government to open up 396,000 hectares of native forests to nuclear waste being dumped at a sacred site for traditional owners. There are plenty of battles to fight at home so why give a thought to Chinese workers?

Much of the narrative pushed by the media is of a China that is seeking to control Australian politicians, and a Chinese state that ignores human rights and crushes decent. There is some reporting and social awareness that sweatshops exist, and that brands like Apple and Nike's Chinese supply chains rely on low wages, oppressive working conditions and lax environmental standards. However, nothing is heard about the resistance and social movements standing up for the environment, human rights and decent work inside China.

The growing labour movement in China offers hope for social movements everywhere as an example of organising against incredible odds. Independent labour organising and independent trade unions are banned and workers do not have the legal right to strike in China. But millions of workers have organised autonomously and staged "wildcat", or unofficial, strikes. The China Labour Bulletin reports that in the last two years alone, there have been over 2,400 wildcat strikes alongside protests, road blockades and sit-ins.

These actions have led to significant victories from 35% pay increases, overtime payments backdated six years and banning the use of toxic chemicals. China's workers are not passive victims of repression and exploitation. They are creating powerful social movements in the face of state oppression. The impact of the workers' movement will not only be limited to workers' rights. It will also affect the social, economic and political development of China and the rest of the world.

In the 1990s, companies from Australia, the US and the rest of the West moved much of their production overseas. A key factor in this was the opening up of the Chinese labour force to Western companies, leading to cheap labour flooding the global market. The price of consumer goods dropped, poverty wages and oppressive work conditions became the norm, and we effectively exported much of our environmental pollution. Countries were forced to slash any standards they had in the face of companies that could take their business elsewhere in the world, alongside trade deals that forced them to 'open up for business' through deregulation.

The main people to profit from this were Western consumers, and the CEOs and powerful people who made fortunes. While 'ethical consumerism' has grown in the period since, it's impossible to remove ourselves from the horror and injustices associated with the supply chains of many products. While at the same time Australian companies continue to destroy lives and pristine environments across the globe. To challenge this global system of exploitation we need to do more than buy organic, we need to stand shoulder to shoulder with workers across the planet to build a global movement for social and environmental justice.

Companies need to be held to account where ever they go, so that skipping the country when regulation kicks in isn't an option any more. That doesn't just mean boycotting certain brands or blockading flagship stores. Making noise and damaging brands is a great way to hurt their bottom line and to show workers and communities across the globe that we are standing in solidarity with them. But to win big and change the system we need a bigger strategy that uses every tool in the box.

The trade deals our government signs are one part of the puzzle. Shockingly, companies can sue the Australian government if it brings in regulations that hurt their future profits. That makes it much harder for our social movements to ban fracking, build renewables on a mass scale, and cut pesticides out of our food. It's even worse for other people across the globe with companies looking to sue governments for increasing labour and environmental standards to a level we take for granted.

If we want to stop companies riding roughshod over democracy and human rights, we need to stop signing away our ability to make companies act in a socially and environmentally sustainable way. Image how much stronger that resistance would be if we take the time to stand in solidarity with social movements across the globe, building trust, relationships and movements that can mobilise against these deals from both ends.

Government institutions spend money every day on behalf of the public ‒ from your local hospital to the Department for Education and Training. In fact, they buy a lot of stuff. When it comes to computers alone, the federal government owns around 350,000 PCs and laptops, spending $1.5 billion last year. That's big money that could be used to pressure brands to take the demands of workers in their supply chains seriously, and support workers in China and beyond to transform their social and environmental conditions.

If we want more lasting change that holds companies to account, we need new binding legislation to hold our companies responsible for their crimes wherever they may occur. In France, the government has recently introduced legislation that allows people across the globe to sue French companies destroying their environments and communities. If we want to protect people and planet from the sharp end of Australian capitalism in the form of corporations like Rio Tinto and BHP, then our justice system needs to work for people no matter where they live.

The Economic Justice Collective at Friends of the Earth Melbourne is developing a new campaign to challenge corporate power with people power. If you're interested in joining the global movement taking on big business then the collective is open to all. The Collective's contact details are listed on the inside front cover of Chain Reaction.

Andrew Taylor is a member of Friends of the Earth Melbourne's Economic Justice Collective, and previously worked for People & Planet in the UK on their Sweatshop Free and fossil fuel divestment campaigns.