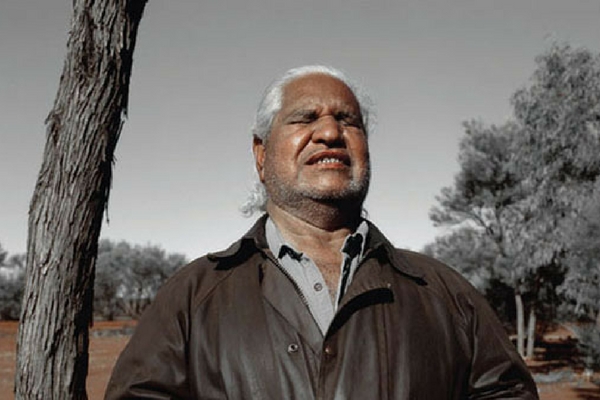 It was with great sorrow that Friends of the Earth learnt of the passing of Yami Lester in July. Yankunytjatjara Elder, atomic test survivor, Aboriginal rights activist, father, grandfather and great-grandfather, Yami's voice and support will be sorely missed.

Many Friends of the Earth anti-nuclear campaigners got to meet Yami over the decades. On occasions we would stay with him at Wallatina ‒ in the far north of SA ‒ as part of our Radioactive Exposure Tours or on our way to Australian Nuclear Free Alliance meetings in Alice Springs. The last time some of us got to visit Yami at Wallatina was in September 2016 ‒ we were working with Aboriginal communities to stop the SA government's plan to dump the world's high-level nuclear waste on Aboriginal land to improve the state's economy.

Yami lost his sight as a result of one of the British atomic bomb tests in SA in 1953. Speaking on ABC radio in 2011, he said: "I was a kid. I got up early in the morning, about 7:00am, playing with a homemade toy. We heard the big bomb went off that morning, a loud noise and the ground shook. I don't know how long after we seen this quiet black smoke ‒ oily and shiny ‒ coming across from the south. Next time we had sore eyes, skin rash, diarrhea and vomiting everybody, old people too."

Along with Maralinga veteran Avon Hudson, Yami was responsible for the formation of a Royal Commission in the 1980s that shone a light on the atomic crimes of the British government, the spinelessness and culpability of state and federal governments, and the ugly racism that pervaded everything to do with the atomic bomb tests.

As a young man, Yami joined the Aboriginal Advancement League in Adelaide. He was also central to the work of the Pitjantjatjara Council that led to the grant of freehold title to traditional owners in SA.

His children have taken up the call for his lifelong battle for justice. His eldest daughter, Karina Lester, recently travelled to New York for UN negotiations on a treaty to ban nuclear weapons. The treaty recognises the disproportionate impact of nuclear weapons on Indigenous peoples around the world, and has provisions for assistance and reparations for those affected.

Yami's warmth, kindness, generosity and resolve inspired so many Aboriginal and non-Aboriginal people, and as Tjamu (grandfather) and Katja (great-grandfather) "he will be forever remembered by his loved ones, his extended family, community and by so many", a statement from his family said. "Yami leaves an incredible legacy of better global understanding of the devastation of nuclear bombs and for the ongoing battle for recognition of the consequence of them on the rights and interests of Anangu."

When the No Dump Alliance formed in May 2016, to oppose plans for an international high-level nuclear waste dump in SA, Yami became the ambassador for the Alliance and, together with his daughters Karina and Rose, spoke loud and strong against nuclear waste dumping in SA.

Yami said: “In 1953, I was just ten years old when the bombs went off at Emu and Maralinga, I didn’t know anything about nuclear issues back then, none of us knew what was happening. I got sick and went blind from the Totem 1 fallout from those tests, and lots of our people got sick and died also.

"Now I’m 74 years old and I know about nuclear issues. Members from the APY, Maralinga-Tjarutja and Arabunna, Kokatha lands say we don’t want nuclear waste on our land. There are big concerns. And I worry because I know it is not safe for South Australia land and the people. Why does the Government keep bringing back nuclear issues when we know the problems last forever?

"It means a lot to me to be in this Alliance. I would like others to listen and join, become a member and fight together.”