A New Threat to Charities and Environmental Organisations 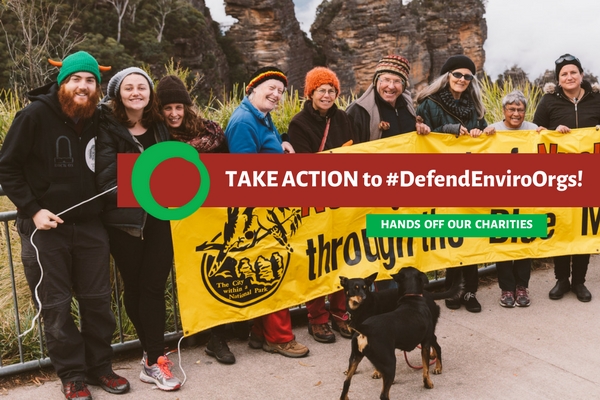 After a long-running campaign waged by the Minerals Council and the hard right to strip environmental organisations of their charitable status, the Turnbull government has appointed a known ideological warrior as head of the charities commission.

TAKE ACTION to Defend Enviro Orgs: Call on PM Turnbull to stare down the hard right on charities

The ACNC monitors the compliance of charities and maintains a list of registered organisations. It also ensures charities abide by the laws in the Charities Act.  Assistant treasurer Michael Sukkar announced the appointment at Parliament House on Thursday morning.

Over 100 Australian charities wrote an open letter in June to the Prime Minister after Assistant Minister Sukkar failed to re-appoint Susan Pascoe as Commissioner, despite very strong positive recommendations for her reappointment.  The Assistant Minister had refused to meet with anyone from the ACNC for over six months even though he is responsible for the agency, and did not even meet with Susan Pascoe prior to not renewing her contract.

The former Labor MP has expressed controversial views about charities in the past. He previously argued that advocacy should not count as a charitable purpose and backed an unrealised Abbott government promise to remove it.

Such a reform would be devastating for environmental charities. He was Senior Fellow at the conservative Australian think tank the Institute of Public Affairs (the IPA), and the head of its Non-Government Organisation Unit. He joined the IPA in 1997 and left in 2006. The IPA has had a long term interest is seeing green groups lose government funding (background here).

Describing environmental groups opposing the Adani coal mine in a 2014 newspaper column, Mr Johns stated: "Why should we be forced to subsidise the views of a minority who are anti-progress?”

He said the government should deny “charity status to the enemies of progress”.

Gary Johns has criticised the entire rationale for tax-deductible status on the basis that it contradicts the “voluntary nature of charity”.

Johns also argued that governments “should be reticent” about supporting organisations that “promote viewpoints on issues where there is reasonable disagreement in the electorate”.

Reaction to the appointment

A range of charities and environmental organisations stated: The appointment of Dr Gary Johns to lead the Australian Charities and Not-for- profits Commission indicates that the government is intent on silencing Australians by destabilising Australian charities.

Add your voice to the call - Email PM Turnbull today to #DefendEnviroOrgs and send a clear message to say #HandsOffOurCharities.

The groups signed onto this statement included:

Friends of the Earth Australia

David Crosbie, CEO of the Community Council for Australia; "this is a bizarre appointment.  Gary Johns has made numerous public statements that clearly indicate he is opposed to many charities and their work.  Only a government committed to attacking the charities sector would put someone like Gary Johns in as head of the ACNC."

The ALP. Labor blasted Dr Johns' appointment, with Labor MP Andrew Leigh saying the government was taking the "war on charities to a whole new level".

Cassandra Goldie, the chief executive of the Australian Council of Social Service, said the appointment undermined the regulator’s independence. “We see the appointment through the lens about what it says to the government’s approach to the regulation of the charitable sector,” she said.

Marc Purcell, the chief executive of the Australian Council For International Development, said the move “displays a contempt by the government for Australia’s charities”.

“We’re concerned that this appointment couples with the upcoming review of the legislation for the charity regulator could combine into a perfect storm that may destroy charitable advocacy and tax deductions for advocacy.”

Purcell said during the five-yearly review of the ACNC legislation, which is due now, the government would have the ability to change the remit of the regulator, giving Johns the ability to implement his views.

On social media, the ACTU said: Gary Johns 1. Attacks welfare recipients. 2. Attacks charities & not-for- profits. 3. Attacks unions. So of course the Turnbull Govt have made him a Commissioner for Australian Charities and Not-for- profits.

Please consider making a tax-deductible donation to Friends of the Earth Australia to help us continue to fight these attacks on Australia's not-for-profit sector.

This article in The Conversation from earlier this year, gives a good explanation of attacks on charities, you can also read more on the history of attacks on Friends of the Earth and other green groups HERE.