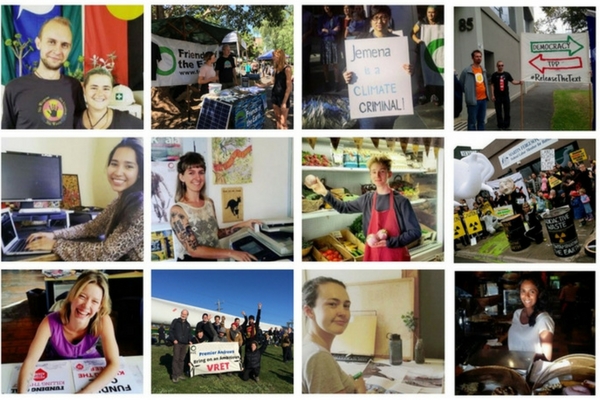 Another busy month around the network for Friends of the Earth Australia. 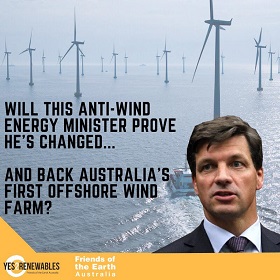 Australia could soon be home to the world's largest offshore wind farm, the Star of the South Energy Project off Victoria's Gippsland coast.

The Star of the South requires both state and federal planning approval, but has been held up by the federal Coalition government for unknown reasons.

The fate of the project now rests in the hands of Australia's latest Energy Minister, Liberal  MP Angus Taylor.

Taylor has a reputation as being one of the most anti-wind MPs in the federal Coalition. He has spoken at  anti-wind rallies, called for the national Renewable Energy Target to be axed, opposed emission reduction targets and was involved in an investigation that recommended Victoria allow fracking to proceed in the state.

He must redeem himself now he is Australia’s latest Energy Minister.

Will Energy Minister Angus Taylor prove that he can act in the best interest of the community and the climate, and back Australia’s first offshore wind farm?

Have you been keeping up with the news on the nuclear waste dump proposals in South Australia? Traditional owners are taking a legal stand and the community ballots are on hold, a senate inquiry report has criticised the site selection process, they're protesting in Port Augusta, a new report says benefits to community of dump "exaggerated", MUA have spoken out about nuclear safety concerns at SA ports and we are making some noise about it all!

Take action: Send a message to the minister calling for a stop to this flawed process!

Please email Minister Matt Canavan and Shadow Minister Kim Carr calling for an end to the SA dump plans, and for the government to initiate a comprehensive, independent inquiry to address all options for the responsible long-term management of Australia's nuclear waste. 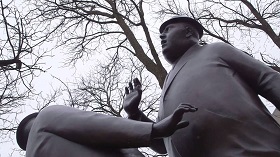 A Silent Transformation is a film about the transformative power of the co-operative model. The co-operative movement was built by people who took on the responsibility for their collective wellbeing in the face of government neglect, economic exclusion and cultural discrimination. As the modern economy increasingly denies vast sectors of the population basic amenities for decent life, this co-operative spirit is as critical as ever. However, over the years the co-op sector has become insular and poorly understood.A Silent Transformation sets out to explore the innovative self-help efforts of diverse communities across the Province of Ontario, which by addressing their needs collectively are helping to regain the radical vision of co-operation. In these communities are the seeds of economic democracy, global solidarity, and a new popular movement to transform society!

The film will be followed by a panel discussion hosted by Antony McMullen, Earthworker and Cooperative Guru.

Details for the screening: 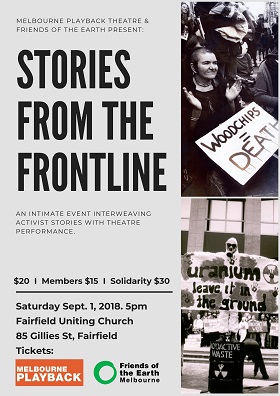 FoE Melbourne has been working really hard across our campaigns to secure some important outcomes in the Vic state election - but sometimes its nice to step back and reflect on just how far we've come, and how we made it here in FoE's 45 year history.

Professional actors from Melbourne Playback Theatre Company will be interpreting stories shared by members of the audience, bringing these stories to life and into focus in a way that is entertaining, surprising, illuminating and transformative.

We'll be asking some big questions at this intimate event interweaving activist stories with theatre.

What does the frontline mean to you?

Where do things get real, raw and inspire you to take action?

At what point would you consider putting you body, your career, your relationships, on the line?

The whole of NSW is in drought 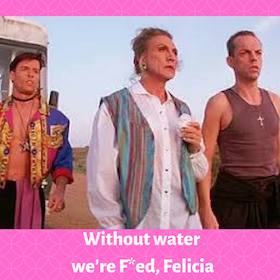 Internationally significant wetlands like the Coorong and Menindee Lakes in Murray Darling Basin have struggled through the wet years under a Basin Plan crippled by water theft and corruption. As the drought continues, water is still being stolen from the environment by a Government that fails to recognise the long term necessity of a healthy river for communities to survive in the Basin.

We are heading to the front line: Broken Hill, the Darling River and Menindee lakes with a creative action!

Join us on threatened species Day, September 7th at the Menindee lakes for a powerful performance of "I Will Survive"

Sign up to be part of the Broken Heel action

Back in 2011, FoE became aware of the threat posed to Victoria by the unconventional gas (UCG) industry, which had quietly staked out large areas of the state for exploration. Working with Lock the Gate and more than 75 regional communities who declared themselves coal and/or gasfield free,we turned UCG drilling into a major issue across Victoria.

Building community power in the regions, matched with an inside track lobby effort, saw us secure the first permanent ban on the process of fracking in Australia and a moratorium on onshore conventional gas exploration in the state.

August 30 marks the 2nd anniversary of this important win for the climate, the community and farming.

If you use twitter please re-tweet this to remind the government that the community supports good environmental decisions.

For a background on this campaign and how we won, please check here.

Australia's emissions are rising and funding for climate action was slashed been slashed by the new Prime Minister Scott Morrison in the May budget when he was Treasurer.

The Daniel Andrews government put a stop-gap in place in 2017 by creating a $4.3 million grant scheme, yet demand dramatically outstripped what was available and just 24 of 240+ projects received support.

When we're facing a climate change emergency it's not good enough that positive solutions are missing out on start-up funding.

This is why Friends of the Earth are calling on the Andrews government to ramp things up by committing to establish a Victorian Climate Change Action Fund of at least $100 million before the election.

Please feel free to contact me if you are interested in getting more involved with your local group or one of Friends of the Earth's affiliated campaigns. Let's make 2018 a year of action!

Please donate to support our work for environmental and social justice

I acknowledge that I meet and work on the land of the Wurundjeri people and that sovereignty of the land of the Kulin Nations was never ceded. I pay respect to their Elders, past and present, and acknowledge the pivotal role that Aboriginal and Torres Strait Islander people continue to play within the Australian community.