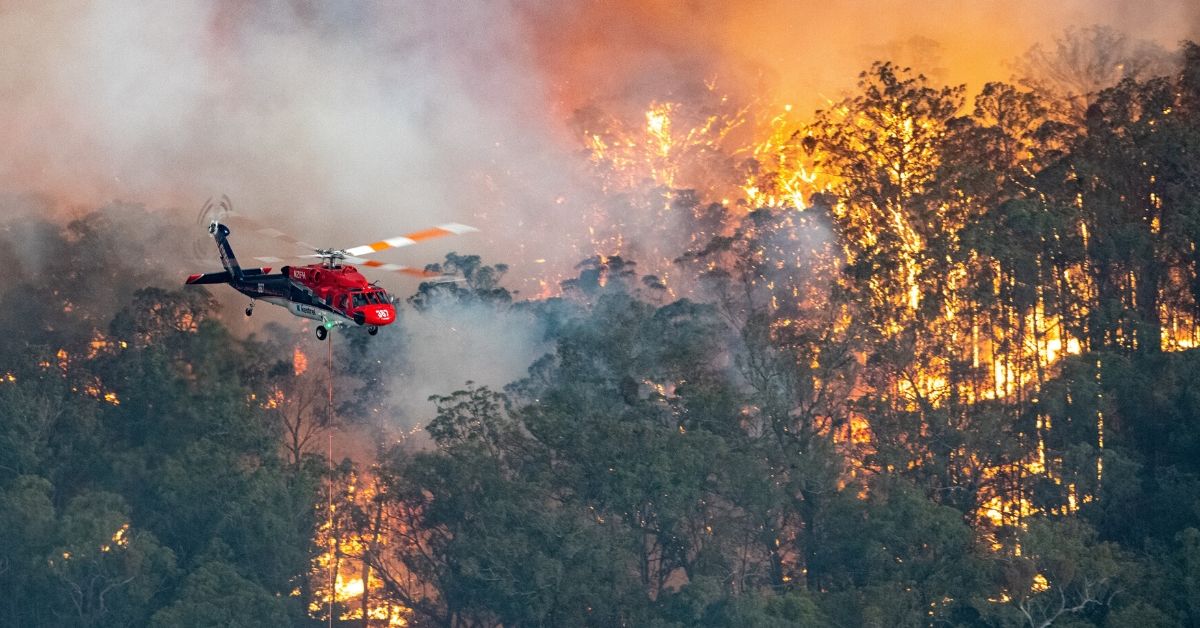 Cam Walker - Fires burnt an estimated 18.6 million hectares across Australia during the 2019/20 summer, destroying almost 3,000 houses and taking the lives of at least 34 people. Now that the fires are contained, attention turns to 'what next'?

Why were this season's fires so bad, and what can we do to make next summer less destructive? Already a number of inquiries are underway.

Of course, fire has a pivotal role in almost all landscapes across Australia, and this has been the case for millions of years. The continent of Australia is a cultural and natural landscape: it has been shaped by First Nations peoples for many hundreds of generations. Colonisation disrupted this long management and now settler society is trying to understand how fire should be used in the landscape to manage it for biodiversity, human safety and economic production.

There is no doubt that climate change is driving intense fires. Beyond the question of the role of climate change in making this summer's fires so intense, the public debate has revolved around various issues including the role of arson and whether the fires have been worsened by a lack of hazard reduction burning.

Arson is a huge problem in Australia ‒ many fires are started deliberately. NSW police charged 24 people with deliberately lighting bushfires this season. However, a conspiracy theory did the rounds on social media this summer which was clearly promoted by anti-environmentalists. They argue that arson was the primary cause of the fires, not climate change. Clearly both factors are at play, yet this argument tends to push the line that only one of these options is possible.

Number crunching by the ABC found that throughout this summer's bushfires, less than 2% of the hectares burnt have been due to arson.

The Guardian reported: "Analysis found there is likely a "disinformation campaign" on Twitter's #arsonemergency hashtag due to the "suspiciously high number of bot-like and troll-like accounts".

The problem of arson does not detract from the clear scientific evidence showing climate change is making Australia's bushfire seasons longer and more severe. The Bureau of Meteorology's advice is that climate change is "influencing the frequency and severity of dangerous bushfire conditions in Australia and other regions of the world, including through influencing temperature, environmental moisture, weather patterns and fuel conditions".

There are loud voices in the public debate claiming that 'greenies' (and/ or the Greens party) are to blame for the intensity of this summer's fires because they have blocked hazard reduction burns. This argument simply does not stack up.

Firstly, no major environmental group opposes burning, nor do the Greens.

Secondly, the Greens are not in power. Hazard reduction burning is largely the responsibility of state governments. The Coalition and ALP are in power across Australia, not the Greens. So how can a party that is not in power control what governments do?

As reported in The Guardian:

Over the past four years, NSW National Parks have undertaken over 75% of all prescribed burning in NSW, and as of December 2019, 88% of all fires that have started in national parks (typically by lightning) have been contained within the park.

Thirdly, it is clear that some organisations, media outlets and political groups are promoting the 'greenies are to blame' narrative for their own political purposes, which is then being amplified by people who are simply concerned about the fires.

Prof. Ross Bradstock, the director of the centre for environmental risk management of bushfires at the University of Wollongong, told Guardian Australia: "These are very tired and very old conspiracy theories that get a run after most major fires. They've been extensively dealt with in many inquiries."

Fuel reduction is a tool, not a panacea

A review of the 2009 Victorian fires is clear on the limited time that fuel reduction has value as a tool to reduce the flammability of vegetation:

"Probability of crown fires was higher in recently logged areas than in areas logged decades before, indicating likely ineffectiveness as a fuel treatment. The results suggest that recently burnt areas (up to 5–10 years) may reduce the intensity of the fire but not sufficiently to increase the chance of effective suppression under severe weather conditions. Since house loss was most likely under these conditions (67%), effects of prescribed burning across landscapes on house loss are likely to be small when weather conditions are severe. Fuel treatments need to be located close to houses in order to effectively mitigate risk of loss."

Former NSW fire and rescue commissioner Greg Mullins says that hotter and drier conditions, and the higher fire danger ratings, have limited the amount of prescribed burning carried out. As well as climate change narrowing the window to carry out prescribed burning, Mullins said some fires have become so intense they have burned through areas that had been subject to hazard reduction.

Shane Fitzsimmons, head of the New South Wales Rural Fire Service, says hazard reduction is important but not a panacea for bushfire risk and has "very little effect at all" on the spread of fire in severe or extreme weather.

A study in Tasmania found that prescribed burn-offs have little impact on reducing the extent and intensity of bushfires. Researchers from the University of Tasmania's school of biological sciences simulated more than 11,000 fires on a typically dangerous fire-weather day. They found that firefighters would need to carry out prescribed burn-offs across 31% of Tasmania in order to have a significant impact on reducing the threat from wildfires. More realistic smaller-scale burn-offs, however, had almost no effect on the extent and intensity of a wildfire.

Prof. David Bowman, who helped lead the Tasmanian study, said the findings suggested that planned burn-offs were still necessary but not sufficient. He said governments and fire authorities needed to consider taking a more local approach, and introduce on the outskirts of towns and cities clever landscape designs that included irrigation and green fire breaks in the form of parklands, that could work in conjunction with burn-offs to help mitigate bushfire risks.

There are significant issues to consider if we decide to radically increase the amount of hazard reduction burning we do:

Should we increase logging to reduce bushfire risk?

Another argument in the public debate has come from the timber industry and the CFMMEU ‒ the union which represents many workers in the sector. They have called for fuel loads in national parks to be aggressively managed through hazard reduction burning and selectiv­e logging.

However, logging can contribute to the severity of bushfires in wet forests. This was shown in research carried out after the 2009 Black Saturday fires. Data from areas that burned on Black Saturday clearly shows how extensive logging can increase the severity of bushfires in mountain ash forests. It found that the risk of "crown" fires, which burn severely and spread rapidly through the forest canopy, is greatest in mountain ash forests that have been regrowing for about 15 years. Before the 2009 fires, these young trees were established following clearfell logging.

Further information ‒ and references to the literature referred to above ‒ found here.

Cam Walker is the campaigns coordinator with Friends of the Earth Melbourne and a volunteer firefighter with the Country Fire Authority.