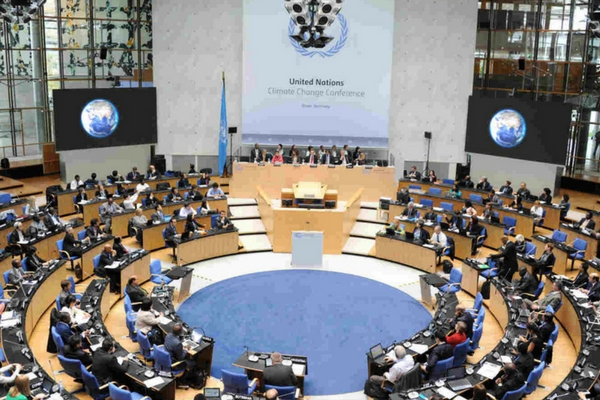 BONN, GERMANY, October 23, 2015 – The final preparation session for December’s global climate summit in Paris is ending in disappointment and disarray today in Bonn.

The weak negotiation text, which is largely favorable to developed countries, points to a shockingly inadequate deal at the Paris talks. Developing countries opposed a non-transparent process, after an attempt to remove observers from some negotiation rooms.

“The deplorable inaction at the climate negotiations is a calamity for people across the world. We are facing a planetary emergency with floods, storms, droughts and rising seas causing devastation. The risk of irreversible climate change draws ever closer, and hundreds of thousands of people have already paid with their lives,” said Dipti Bhatnagar, Friends of the Earth International's climate justice and energy coordinator.

“We are seeking a just and ambitious deal in Paris, but with the talks held hostage by rich country governments dodging their responsibilities and blaming developing nations, and by corporations promoting dirty energy and false solutions it’s difficult to imagine that happening now. We need to keep building a movement of people that can challenge governments and champion the real solutions to the climate crisis,” said Dipti Bhatnagar.

“We need a fair agreement, a fair process and fair shares of climate action. What we have on the negotiation table now is increased effort by more than 140 developing countries but it won’t avoid catastrophic climate change unless rich countries have a dramatic change of heart.  We need rich countries to urgently commit to do their fair share,” said Susann Scherbarth, climate justice and energy campaigner at Friends of the Earth Europe.

Friends of the Earth International believes that the solutions lie with people. Across the world ordinary people are resisting dirty energy and building democratic, community and socially controlled power.

“People will have the last word in Paris. But the demonstrations in Paris will not be the end. The struggle will continue, as it must, because the job will not be done in Paris,” said Susann Scherbarth.

A new report shows that many developing countries are pledging to do more than their 'fair share' to cut emissions while rich countries are dangerously failing to pull their weight. The summary of the new report is online at http://civilsocietyreview.org  The full report will be available in November.

Susann Scherbarth, climate justice and energy campaigner at Friends of the Earth Europe: [email protected] or +32 486 34 18 37


Friends of the Earth International asked its supporters to join its activities in December in Paris and in 2016, and to sign up to the energy revolution campaign online. For more information:  https://www.wearetheenergyrevolution.org and https://www.facebook.com/events/519229814919821