Camp Nunguu and the North-East Coast fight for forests

This article, from Chain Reaction magazine written by Zianna Fuad, is a small story about a motley crew of caring souls that have risen together to reject the destruction of public state forests across Gumbaynggirr homelands. 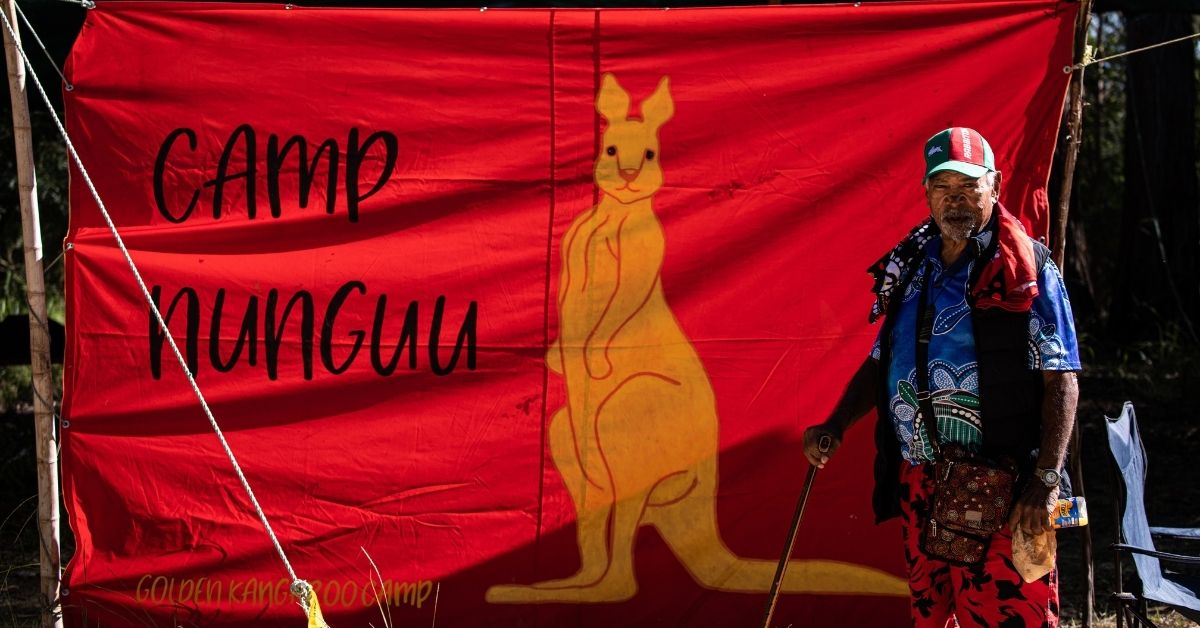 To begin I want to acknowledge, with deep respect and regard, that this is Gumbaynggirr land that holds a multifaceted story of horrific abuses, displacement, and dispossession and a longer lineage of care, connection, resistance and cultural renewal.

Newry State Forest is a beautiful, biodiverse public native forest near Bellingen, NSW. It is one of the largest, unburnt pieces of forest in NSW after the black Summer bushfires, home to koalas and many other threatened species on a path towards extinction. The forest borders on Jaaninga Reserve and Bollanolla Mountain and is the sacred homelands of the Gumbaynggirr nation and contains significant cultural sites and song lines. One of the most potent is Nunguu Mirral (Kangaroo Special Place) that Newry State Forest looks towards, marking the range between this forest and the sea.

Without consent from Gumbaynggirr people, Forestry Corporation NSW (FCNSW) intends to industrially log this forest, putting local waterways, air, health and culture at risk. Rising up with local Elders, Gumbaynggirr Custodians, locals and environment groups have come together in a historic fight for the future of this forest, building a community blockade at the entry of Newry, named by Gumbaynggirr elders as Camp Nunguu, the camp of the Golden Kangaroo.

The camp has been growing since April this year, with hundreds of people dropping in over those months to show their support.  While Forestry Corporation has suddenly gone quiet after finishing the roading,  we have grown into a flourishing community space to upskill, inspire and connect people to country and culture as they ground on Gumbaynggirr land.

The ancestral beings gave us our lore, our culture, and taught us how to live in harmony with the land. Everything was precious – we needed these places to survive. If they keep going like this we won’t have forest left. This forest needs to be a sanctuary for our people and other animals.

Resistance to native forest logging has made a strong come-back over the last few years, with groups uniting to protect the Kalang Headwaters and Nambucca State Forest. A beautiful suite of diverse tactics with a generous community and guidance from Elders has meant that all camps have flourished, achieved wins and gained national media attention.

This is a hard fought victory made possible by the tireless effort, spirit and energy of our elders, Gumbaynggirr custodians, local community and allies over the past few months. We have sent a strong message to the NSW Forestry Corp that their relentless destruction of sacred country will be met with fierce resistance. Our ancestors fought hard to protect country and it has been their presence and protection that has given us an enormous strength to continue this fight.

We live in the so-called “wood bowl” of NSW with nationally significant breeding colonies of koalas. We cannot have both unless these forests are left standing. We are tired of sounding the alarm about the value of forests for our waterways, climate and the survival of koalas and other threatened species. We are tired of reflecting the Government's own Koala Inquiry back in their face. We are tired of watching Gumbaynggirr voices continuing to be ignored, as waves of industrial logging disrupt more people from connecting with their country.

The thing that makes it all okay is that we are making waves and growing strong; forming those relationships that are bonded around one cause and will arise to any other future cause that threatens Gumbaynggirr land. Whether it’s mines or Mcdonalds - industries and big business have learnt before not to choose the Bellingen valley if they want to succeed.

The fact is; this community doesn’t need native forest logging to survive. Forestry Corporation employs fewer people in our Shire than our local IGA, they make less than $28 per hectare, fill our roads with log trucks and ruin most of our local roads and riverways. So, for good reason, they are met with resistance at every forest they enter.

Last year, Forestry Corporation was issued a 40-day stop work notice from the EPA after investigations into operations at Wild Cattle Creek exposed the illegal felling of two giant, old growth trees. It was citizen scientists that found and reported those breaches and Forestry Corporation NSW have not touched those compartments since.

Just five days after the Wild Cattle Creek suspension, the EPA issued Forestry Corporation another stop-work notice at South Brooman State Forest near Batemans Bay, this became another one of over 15 investigations of logging breaches found across NSW last year. Having proof that Forestry Corporation NSW were illegally logging and ignoring their own weak environmental protocols was another nail in the coffin for their image of “sustainable harvesting”. It’s worth noting that by law they only need to wait for a koala to get out of a tree, and be on the ground, until they chop the whole thing down.

In brighter news, it’s the incredible groundswell of community action that has risen to defend Gumbaynggirr forests (and some natural blockading from La Nina) that has kept them out of the entire Bellingen valley this year.

So no matter what we are served, we continue to stand on the frontlines playing music, sharing food, practicing our climbing, learning language and feeling what it feels like to sleep quietly in a forest untouched.