Clean Coal LOL ... but carbon capture and storage off Ninety Mile Beach is no laughing matter 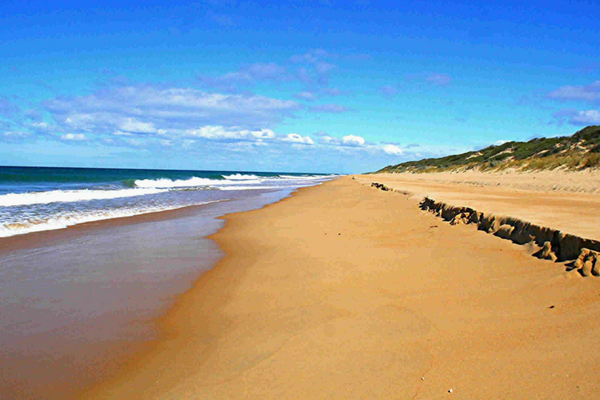 Golden Beach is an idyllic section of Victoria's Ninety Mile Beach. It boasts a pristine coastline, plentiful fish, multitudes of birds and the skeletal remains of an 1897 shipwreck. But there is a cloud hanging over this lovely place.

A publicly-funded state government project called CarbonNet has earmarked the area for carbon storage. This February, seismic testing for a suitable carbon storage site began in the waters off Golden Beach.

Why are we concerned about carbon capture and storage (CCS)?

CCS is also known as geosequestration or carbon control and sequestration (or as we mostly call it, 'the money pit'). It involves removing CO2 from power station flue gases by absorbing them into an aqueous solution containing chemicals known as amines. You then extract the CO2, compress it into a liquid and pump it into a storage facility. In this case, the space left by an old gas reserve off the Gippsland coast.

There are well-founded and grave concerns about CCS. Despite billions of dollars being spent in projects worldwide, the possibility of dangerous leakage remains, rendering the exercise futile. Leakage of any more C02 than 1% every 1,000 years would undermine the process entirely.1

So, CCS makes coal power plants produce greater quantities of toxic chemicals, reduces their efficiency and is exorbitantly expensive. More power is required to run the capture process and further power to capture the carbon emitted for that process, in a continuous feedback loop. The cost of capturing the extra carbon was not considered when CCS was first proposed, resulting in the economic failure of pilot projects so far.3

Victoria's coal policy, Statement on future uses of brown coal, relies heavily on the imagined future success of CCS to continue the use of coal. Alarmingly, these so-called clean alternatives include converting brown coal to hydrogen to be sold to Japan for motor vehicle fuel. (For a critique of this policy, see Catherine Hearse's article in Chain Reaction #131.)

Until we give up on the fantasy of clean coal through CCS we will not address the real issue: the need for a complete phase out of coal for a safe climate future.

CCS is also a highly ineffective way to reduce carbon output. It would be easily outpaced by simple reductions in energy use. One commentator calculated that, "Simply by not overfilling our kettles, we could remove about the same amount of CO2 as saved by CCS at a major power station."4

State and federal governments and the Global CCS Institute have spent millions in support of CarbonNet. Nationally, Australia has spent $1.3 billion on CCS technology.5 Truckloads of money on an experimental technology that's not yet proven to work anywhere. The Victorian government must stop funding CCS research with public money and re-allocate any remaining funds towards job creation in the LaTrobe Valley.

How does it compare to renewable energy like wind and solar?

Solar and wind energy are both currently cheaper than CCS and continuously decreasing in price. Renewables are already reliable, and unlike CCS, are reducing our carbon output. The funding wasted here would be better spent on improving and rolling out proven renewable technology, but there is a dangerous, misplaced hope keeping old coal alive in a warming climate.

Sarang Supekar and Steve Skerlos, from the engineering school at University of Michigan, write: "Keeping the coal in the ground is not only the most economical way of reducing carbon emissions, it is a sure way to save thousands of lives every day due to cleaner air. It is a classic case of "prevention," through decarbonization of energy systems, being better and cheaper than the "cure" of CO2 capture."6

The seismic testing at Golden Beach shows that the state government and CarbonNet are taking the CCS process seriously despite its unproven and risky reputation. The Gippsland coastal community near Golden Beach has recently been subjected to the exhausting process of fighting onshore gas exploration, and in nearby Seaspray disused fracking wells sit alongside farmland. Fortunately the locals are well versed in the arts of challenging toxic industries, but they are few in number, and need our support.

Follow the 'No Carbon Storage on the Ninety Mile' facebook page to follow local news at Golden Beach. If you know anyone living or holidaying at Golden Beach, make sure they've heard about this.

Join Friends of the Earth Melbourne's Quit Coal collective in our fight against CCS technologies and new and existing coal: