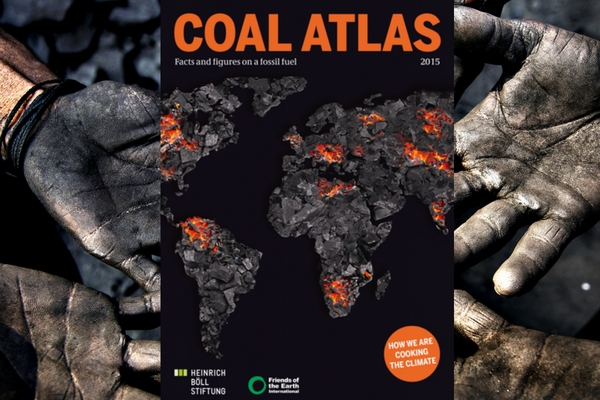 Brussels, Belgium, 18 November 2015 – The Heinrich Böll Foundation and Friends of the Earth International have published today the first English edition of the Coal Atlas 2015 in Brussels. The Coal Atlas contains the latest facts and figures on the use of coal and its environmental and social consequences. With more than 60 detailed infographics, the atlas illustrates the coal industry’s impact on nature, health, labour, human rights and politics.

Moreover, it sheds light on the beneficiaries of coal production and shows the current developments of the sector in China, India, the United States, Russia and Germany.

The atlas is available free in print and online at www.boell.de/coalatlas

Coal contributes more to the climate crisis than any other energy source. In 2014 it was responsible for 14.2 gigatonnes of CO2 emissions. That is 44 percent of all energy-related carbon dioxide emissions, and more than one-quarter of all greenhouse gas emissions. Additionally, the extraction and burning of coal causes irreversible damages to the environment and to people’s health.

In the EU alone, coal-related health problems cost up to 43 billion euro per year. Other effects of the coal industry include forced removals and repression of local residents.

“The Coal Atlas 2015 proves that there is no such thing as clean coal,” says  Jagoda Munic, chair of Friends of the Earth International. She adds: “Europe is still one of the leading coal consumers. Even in 2015, Europe still suffers from devastated landscapes because of huge coal mining projects, especially in Germany, and from toxic emissions in coal-dependent countries such as Poland. The resistance to a coal phase-out in Europe indicates a European Union in the grip of a powerful industrial coal lobby.  But the Coal Atlas makes it clear that Europe needs to shift away from its undemocratic, irresponsible and unjust energy system into one that is socially-controlled, climate-safe, and fair.”

Barbara Unmüßig and Ralf Fücks, presidents of the Heinrich-Böll-Stiftung, urge the EU to take action:

“Europe has both a historic and current emissions debt, and therefore has a specific responsibility to accelerate the transition from its current energy-mix into an emissions-free one. The last few years have shown in Germany and other European countries that a dramatic increase in the share of renewables would not only be perfectly compatible with the requirements of highly industrialized economies, but would also generate important and significant effects on innovation and jobs. This is why the EU needs to enhance its policy instruments for a transition into the emissions-free era – one essential strategy is to reshape the energy union for much more ambitious goals, including a reasonable price for CO2 emissions.”  This would imply also a firm approach to subsidies into the coal industry:  EU member states and the EU itself have been reluctant to take action against coal projects and continue to subsidize coal related business with almost 10 billion euros per year.

“That’s the other inevitable decision: The EU and its member countries have to stop supporting coal projects with taxpayers money”, Unmüßig and Fücks point out. “Not only in Germany, where the mining companies have benefited from subsidies to the tune of 327 billion euros in real terms since 1970. Also worldwide, the EU is subsidizing its coal industries investments, generating countless environmental and social conflicts. One thing's for certain: The European Union must give a very clear signal to phase out fossil fuels, and first and foremost coal, if it wants to lead the global transition into an emission-free world and have its specific weight in advocating for any possible climate agreement at the COP21 in Paris.”

Lucy Cadena, Climate Justice and Energy coordinator for Friends of the Earth International, says: “Europe has grown wealthy whilst burning coal for over 150 years – due to the ‘lag’ effect, it is these emissions that have caused the 1C increase in temperature we are experiencing in 2015. The EU is heading towards the Paris climate talks claiming to be a climate leader, but the facts don’t add up: Europe continues to extract and burn coal within Europe. Globally, European nations use public money to finance dirty, human-rights abusive coal projects all over the world, whilst outsourcing emissions to coal-burning countries in the Global South – notably China – to produce goods for European consumption. These ‘hidden’ emissions add up to a vast footprint, and the EU’s current climate pledge falls dismally short of its fair share. The Coal Atlas shines a light on the huge deficit in ambition we see as we head into the Paris climate summit, and on the need for a radical shift away from coal.”

However, other global players are starting to look for alternative energy sources. In 2014, China’s coal consumption went down for the first time in over three decades. Meanwhile, the Chinese government is pushing for a rapid expansion of renewable energy. In the United States, coal companies are heading towards bankruptcy due to a market shift towards renewables and other sources. On the other hand, India and Russia continue to rely on coal consumption in order to maintain economic growth. This is possible only thanks to subsidies: without them, electricity from coal would cost as much as twice the current price.

The atlas is available free in print and online at www.boell.de/coalatlas