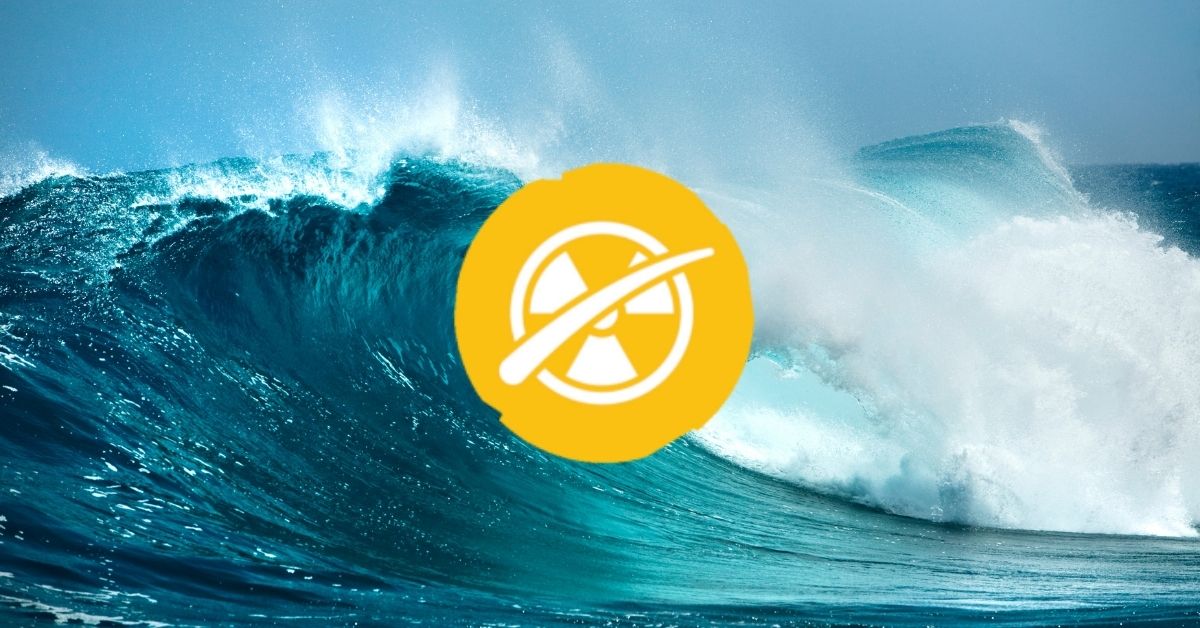 There have been no public briefings or hearings since the ALPS subcommittee's report was released back in February 2020. There were proposals for solidified mortar and stable storage in large robust tanks used for storing oil, but such alternatives were not considered or discussed at all. The decision was made through a highly undemocratic process, ignoring many voices of opposition and concern both at home and abroad, including those in the fishing industry. We strongly condemn this decision.

TEPCO says it will limit the amount of radioactive materials in treated water to 1,500 becquerels per liter when discharged into the sea. Some media are calling this “a release of treated water diluted to 1/40 of standard” but this is very misleading. 60,000 Becquerel/liter is the standard for tritium alone.

At the Fukushima Daiichi Nuclear Power Plant, when determining tritium concentrations in wastewater from groundwater, etc., contamination from other sources such as facilities on the site were taken into consideration in order to achieve an annual additional dose of 1 millisievert, which is the legal standard within the site, and other nuclides contained in the wastewater were also taken into consideration, and the level was set at 1,500 becquerels/liter. In other words, it should be noted that 1,500 becquerels per liter was just a regulatory requirement.

2. Alternatives never discussed or taken into account
The Citizens' Commission on Nuclear Energy, some of whose members are engineers and researchers, proposed large tank storage and the mortar solidification, and submitted that to the Ministry of Economy, Trade and Industry. These were not considered at all, despite the fact that these measures were well documented and have strong track records.

The “large tank storage plan ” is a plan to build a large tank with a dome roof and a water-sealed vent. As for the construction site, there is an area that had been spared for reactor No. 7 and No. 8 on the site of the Fukushima Daiichi nuclear power plant and a dump site. Large tanks are used for oil stock and other purposes.

If a dome roof option is adopted, there is no need to worry about rainwater contamination. The installation of the dike is also included. The "Mortar Solidification Plan" is a method used for the disposal of contaminated water at the Savannah River Nuclear Facility in the United States. The contaminated water is mortar made of cement and sand and stored in a semi-underground condition.

The report by the ALPS subcommittee only contained TEPCO's unilateral denial of the large tank storage plan. In the process, no hearings were conducted with the Nuclear Citizens' Committee that made the proposal.

3. Breaking the promise with fishery communities
Since immediately after the accident, local fishermen have suffered from the intentional and unintentional discharge of contaminated water by TEPCO. In April 2011, TEPCO released 10,000 tons of contaminated water as an emergency measure. At that time, there was no consultation with the fishermen, and the National Federation of Fisheries Co-operative Associations strongly protested against TEPCO.

In 2013, TEPCO announced that highly radioactive water continued to flow out of the plant's premises. In 2015, when the Fukushima Prefectural Federation of Fisheries Associations was forced to agree to discharge water from groundwater bypasses and sub-drains into the ocean, TEPCO promised that it would not dispose of the ALPS-treated contaminated water stored in tanks without the understanding of relevant parties4. Releasing the contaminated water into the sea would break this promise.
Local and national fishers have repeatedly expressed opposition.

Mr.Nozaki, head of the Fukushima Prefecture Federation of Fisheries Cooperative Associations, strongly opposes the idea, saying, "We are strongly opposed to the discharge [of contaminated water] into the sea from the viewpoint of we fishing communities fishing fishes and shellfishes grown in the ocean as a regular business, and demand strict management using storage on land by tanks etc.".

Fishermen in Fukushima are not the only ones who oppose the idea of discharge into the sea. In February 2020, the Ibaraki Federation of Coastal Fisheries Cooperative Associations also requested that contaminated water not be discharged into the sea. The Miyagi prefectural fisheries federation has also expressed its opposition to the release of the radioactive waste into the sea. In a survey conducted by Friends of the Earth Japan to fisheries cooperatives in the six prefectures of Iwate, Miyagi, Fukushima, Ibaraki, Chiba, and Tokyo, almost all cooperatives were opposed to the idea of ocean discharge5.

On June 23, 2020, the National Federation of Fisheries Co-operative Associations unanimously adopted a special resolution against the release of contaminated water into the sea.

A fisherman told us, "Little by little, progress has been made toward the restoration of fisheries. We cannot regain our competitiveness unless we improve the sea in Fukushima. No matter how much it is purified, it contains radioactivity. I oppose the release of it into the ocean". The government should listen to these fishermen.

4. Undemocratic decision-making process
Since the subcommittee compiled the report, the ministry has not held public briefings or public hearings on its content.
Instead of holding public hearings, the ministry has held seven meetings since April 2020 in Fukushima and Tokyo to hear opinions from representatives of industry groups and local governments of its choice. The meetings were attended by senior vice ministers from the ministries, with the heads of local governments and representatives of organizations, who had been briefed by METI in advance, expressing their opinions one by one, and with little question and answer.

5. Open and transparent discussion needed
The government and media have downplayed the impact of the release of ALPS-treated water into the ocean by limiting it to "harmful rumors" or fuhyohigai. However, the release of treated contaminated water into the ocean is the release of radioactive material into the environment. The nuclear accident was a man-made disaster, and the government and TEPCO have responsibility for the accident. The government's approach of emphasizing only "harmful rumors" makes people who point out the effects and risks of ocean discharges appear as if they were the perpetrators, thus shutting down the sound discussions.

It's not too late now. The government should disclose the information on the total amount of radioactive material contained in the treated contaminated water and conduct an open review and discussion of alternatives and risks.

Footnotes:
1. The total of the actual concentration of each radioactive material divided by the notified concentration limit shall be less than 1.
2. Kyodo News “Treated water at Fukushima nuclear plant has radioactive substances”August 19th 2018
3. According to the Nuclear Regulation Authority's "Report on Radiation Control for Nuclear Facilities in FY 2015", the amount of tritium released from the Fukushima Dai-ichi NPS (Becquerel/year) is as follows.
2006 Approx. 2.6 Trillion
2007 Approx. 1.4Trillion
2008 Approx. 1.6Trillion
2009 Approx. 2.0Trillion
2010 Approx. 2.2Trillion
Prior to the nuclear accident, radioactive materials other than tritium from the Fukushima Dai-ichi NPS were N.D. [not detected]
4. TEPCO “東京電力（株）福島第一原子力発電所のサブドレン水等の排水に対する要望書に対する回答について (Response to the request [submitted by Fukushima Fisheries Cooperative Association])” August 25th 2015
5. FoE Japan “What do the fisheries cooperatives say about ocean dumping of contaminated water” https://311mieruka.jp/info/en/mieruka-facts/fact-16/ (Survey result was originally released May 2020)