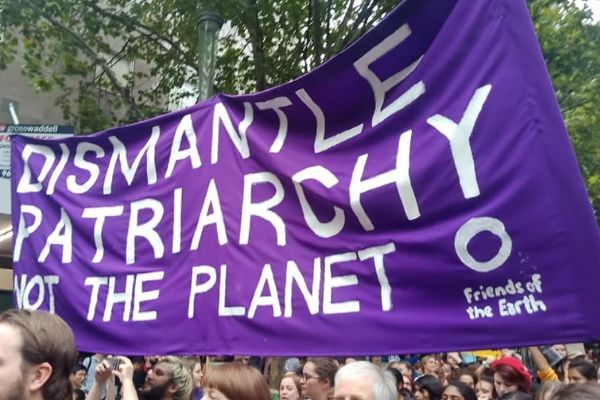 Women are disproportionately affected by environmental injustice, climate change, disasters and the exploitation of Nature. This is especially so for women of colour, peasant and indigenous women, LBTQ women and women workers. Despite this, women are not victims. We are fighters. Women are protagonists in the defense of our territories and the fight for autonomy over our bodies, lives and labour force.

Friends of the Earth (FoE) International believes that social and environmental justice is only achievable through a radical transformation of our societies. We seek justice and freedom from all systems that devalue and exploit women, peoples and the environment, including patriarchy, racism, (neo)colonialism, class oppression, capitalism and heteronormativity. These systems cannot be tackled in isolation; they reinforce one another in the constant drive for material accumulation and for the benefit and privilege of elites in society.

Friends of the Earth are committed to working for gender justice throughout our federation and for the dismantling of patriarchy in our societies. We see grassroots, anti-capitalist feminism as a key theoretical concept and political tool in the fight for women's autonomy, equality between women and men, between peoples and between people and nature. We aim to show, in practice, that this feminism can and is being constructed from the grassroots up, it is relevant to all women and men and it is representative of regional diversity and different realities.

Members of FoE's Gender Justice and Dismantling Patriarchy Working Group explain why this work is so important to our struggle for system change:

"We have to fight [for gender justice and to dismantle patriarchy] in our federation because in our territories, countries and regions we suffer from all forms of oppressions, injustice, inequality and violence against women that degrade our lives and prevent us from advancing as a civilization. System change, as we have defined it within Friends of the Earth International, requires new kinds of relationships between men and women, with equal social, political, economic and cultural opportunities." ‒ Silvia Quiroa, CESTA / FoE El Salvador

"For me, ending patriarchy – especially in Africa – is like putting an end to most of the heartfelt day-to-day setbacks of women, ranging from oppression, denial of their rights and lack of power to make decisions. There is nothing for us, without us. If as a federation we say no to capitalism and its pillars, which are deeply rooted, then patriarchy that feeds into capitalism must be wiped out first to allow equal participation of all us in the struggle." ‒ Peruth Atukwatse, NAPE / FoE Uganda

"Gender Justice and Dismantling Patriarchy work is the solution to the flourishing gender injustices that thrive within and around us. This work is the key to achieving a sustainable and just environment for peoples in work streams, work places, communities and planet. Women's rights are Human Rights. We are women, we are Africans. We are Friends of the Earth. There is No System Change or Gender Justice without us!" ‒ Rita Uwaka, ERA / FoE Nigeria

"The factors and systems that lead to the exploitation of natural resources also defend patriarchy and lead to violations against women that create injustice and inequality. Friends of the Earth International as a federation working to change systems and promote justice has to invest in dismantling all unequal and unjust power bases including patriarchy and must thrive to empower women, ensure their unhindered access to natural resources and strengthen their economic, political and bodily autonomy within our organizations and societies." ‒ Rizwana Hasan, BELA / FoE Bangladesh

"As a female and an environmental activist, I recognize the issue of dismantling patriarchy as a key point in achieving climate justice. Capitalism relies on a patriarchal system due to the fact that it's fixated with oppressing women and subjugating their labor and their bodies for its benefit. We need to make the link between the exploitation of nature and oppression of women visible. We need to realize that if you are trying to break capitalism, that fight has to contain a fight for dismantling patriarchy and that all of our problems with the environment, with women and trans rights, workers' rights, they all come from the same cause and we can break it and solve it only working in solidarity side by side." ‒ Ivana Kulic, The Center for Environment / FoE Bosnia & Herzegovina

"Friends of the Earth International is committed to system change, fundamental to which is the fight for gender justice and the dismantling of patriarchy. We are demanding an end to the exploitation of women's bodies and work. The only way to achieve this is through recognizing women as political subjects, ending violence against women and the denial of their rights and deconstructing the sexual division of labor, which constitutes the material basis of patriarchal exploitation and domination. In the framework of this commitment, we are continuing to build alliances with grassroots feminist organizations, with the World March of Women and with the women of La Via Campesina who, like us, are fighting for system change." ‒ Karin Nansen, Chair of FoE International

More information from Friends of the Earth International