Recent news articles regarding Glyphosate, have been getting prominent media coverage in Australia over the past few days. Lead story for the Sunday Age June 2 2019 revealed that the Victorian State Government is reviewing the use of Glyphosate throughout Victoria. Victoria is the first such state to hold a review into Glyphosate. Friends of the Earth believes that the review is a step in the right direction, but will most likely fall short on a number of grounds. 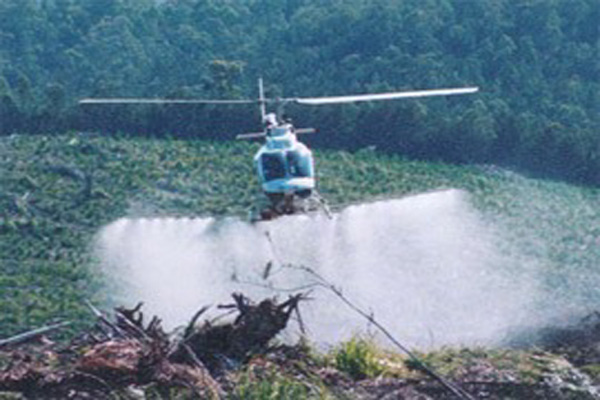 A follow up story published by Fairfax on June 4 revealed that a Victorian gardener is the first person to take legal action against Bayer. The man has been diagnosed with non-Hodgkin Lymphoma.

Friends of the Earth has long held concerns about the indiscriminate use of Glyphosate and the lack of occupational health and safety standards for many people using this herbicide. People have naively believed that it was entirely safe to use.

Friends of the Earth has also had concerns about the impact of Glyphosate through spray drift and water contamination. Residents of Bright, in the states North East have wanted a ban on aerial spraying of Glyphosate on cleared pine plantations that surround the town. Their concerns have continued to fall on "deaf ears". Many people have also rang the Friends of the Earth office complaining about spray units from local councils spraying footpaths and gutters.

Inconsistencies and apathy continue to plague pesticide use and regulation in Australia.

One glaring example is water quality. Why in Australia, is the "safe" level for Glyphosate in drinking water set at a level 10,000 times higher than the equivalent guideline level in Europe? (The Australian Guideline is one part per million, in comparison to Europe at 0.1 parts per billion).

In Victoria some water authorities test for Glyphosate but only at levels 300 times higher than the guideline level in Europe.

This means that the bulk of Glyphosate detections would never be detected by water authorities.

Increasingly, exposure to exceedingly small doses of many chemicals are being seen as problematic by the scientific community. Recent science is showing that Glyphosate consumed in food at very low doses is most likely linked to Fatty Liver Disease, a disease which can lead to a number of health problems including Cirrhosis. These revelations are likely to be the 'tip of the iceberg'.

Any donations for out pesticide work are also greatly appreciated and sorely needed.