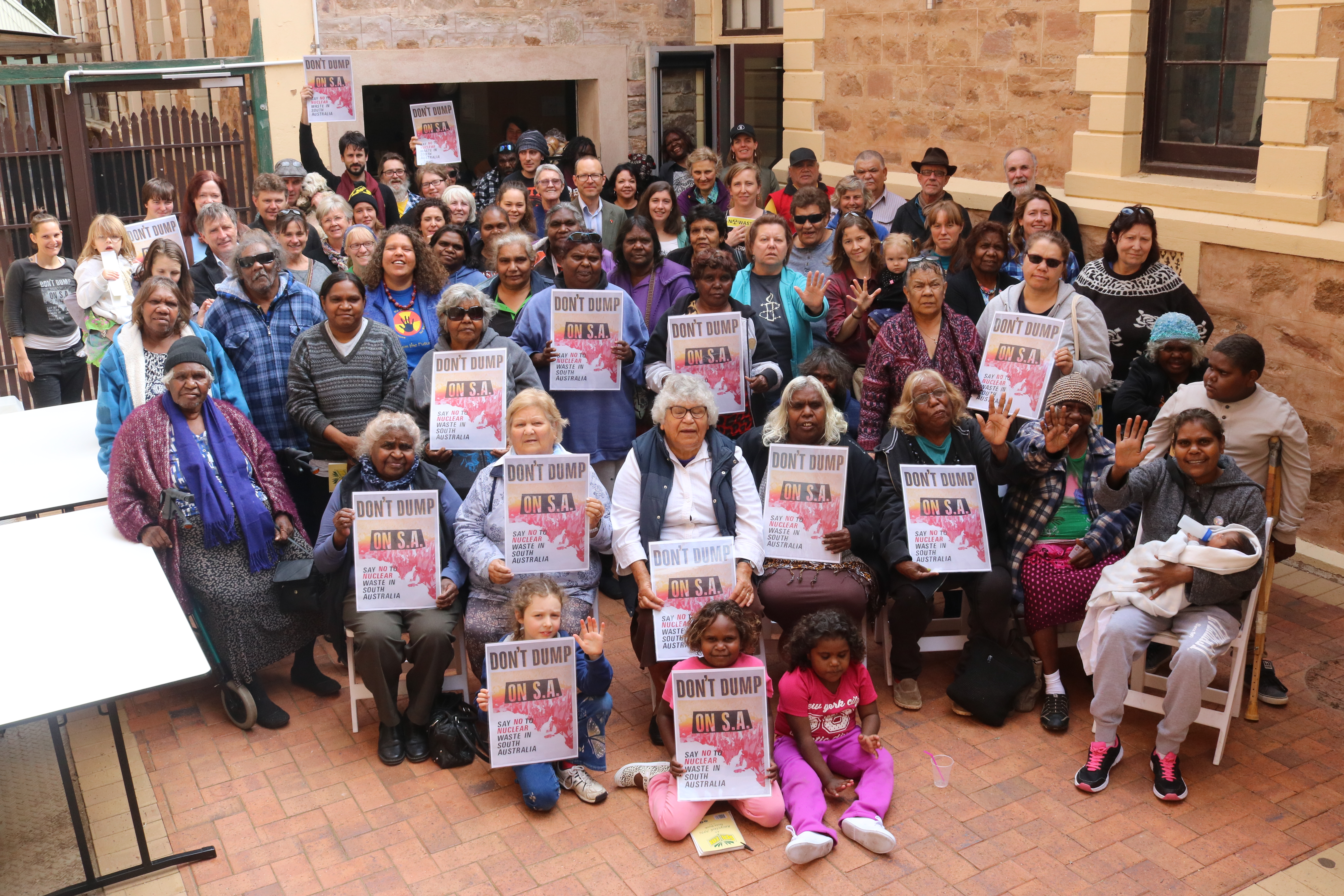 South Australian Premier Jay Weatherill made the announcement at a public forum at Victor Harbour this week, and pronounced the proposal to import 138,000 tonnes of high-level nuclear and 390,000 cubic metres of intermediate-level nuclear waste level waste from international nuclear states 'dead'.

This announcement has been welcomed by traditional owners, communities and environmental groups who have been opposed to the plans since the beginning of the South Australian Royal Commission into the Nuclear Fuel Cycle which began in early 2015.

During the expensive Royal Commission process paid for by South Australian taxpayers, Premier Weatherill initiated a citizens jury, claiming that he would not appeal any decisions made.  Last November, in an amazing outcome for South Australians, two-thirds of the 350 members of the citizens jury came out strongly opposing the nuclear waste dump plan, putting an end to Weatherill's aspirations to achieve the social licence to required to open up the state to become the worlds nuclear waste dump.

However, despite large scale community opposition and over 3000 people protesting on the streets of Adelaide late last year, Weatherill appeared determined to push a nuclear agenda, calling for a state referendum, at the cost of taxpayers and of community wellbeing across the state.

This weeks announcement appears a dramatic turnaround, with the premier stating at the Victoria Harbour forum, "There’s no foreseeable opportunity for this" and that the proposal would not be revisited should he serve another term in office.

Can you help us celebrate this win and keep our important anti-nuclear campaigns going with a donation to Friends of the Earth today?

Although this announcement has been welcomed by Friends of the Earth, Conservation Council South Australia, the Australian Conversations Council and other groups, Friends of the Earth Australia is calling on SA Premier Jay Weatherill to clarify contradictory comments and to formally declare that his proposal to turn SA into the world's high-level nuclear waste dump is officially dead and buried.

"Late last year, Premier Weatherill said he wants to move ahead with his proposal to turn SA into the world's high-level nuclear waste dump despite a resounding 'no' from the 350-member Citizens' Jury. This week, the Premier said in Victor Harbour that the project is "dead". But Mr Weatherill also denied that he has shifted his position, saying: "I think I’m saying the same thing."

"So which is it, Mr Weatherill ‒ is the project alive or is it dead? The contradictions in the Premier's statements leave room for speculation. For example, it seems reasonable to speculate that the Premier wants the unpopular issue buried in the lead-up to the March 2018 state election, after which he will revisit the nuclear waste project if elected.

"Several surveys have revealed majority opposition to the nuclear waste project ‒ and no surveys have revealed majority support. For example, the state government's Consultation and Response Agency surveyed a random sample of over 6,000 South Australians and found just 31% support for the project, and a November 2016 poll commissioned by the Sunday Mail found just 35% support.

"As things stand, the ALP's position on the nuclear dump project is unclear and open to interpretation and speculation, whereas the opposition of the Liberal Party, the Nick Xenophon Team and the Greens is clear and unequivocal," Dr Green said.

Late last year SA Liberal Party and Nick Xenophon both announced that they would oppose the nuclear waste dump proposal in the lead up to the March 2018 election. Further to this, Taiwan, one potential client country, announced it would not dump on SA as a result of widespread public opposition.

Friends of the Earth Australia strongly supports the statement by No Dump Alliance spokesperson and Yankunytjatjara Native Title Aboriginal Corporation chairperson Karina Lester: "Last year communities were dragged through yet again another Government process concerning nuclear plans with an expensive consultation exercise to look at an issue that we have decades of experience fighting against. We spoke with our communities, we appealed to our politicians, we took part in the government's process and provided evidence at the Premier’s own Citizen Jury. We have said NO in so many different ways – NOW it is time for the Premier to listen to the people of South Australia and wipe off nuclear waste plans once and for all."

Friends of the Earth Australia also strongly supports statements made by the Conservation Council of SA yesterday. Craig Wilkins, Chief Executive of the Conservation Council, noted that despite the Premier's statement in Victor Harbour, his Government is still formally committed to pursuing the plan in the face of overwhelming public opposition. Premier Weatherill must clarify his Government's formal position ahead of the next state election.

There is still so much we need to to. South Australian communities in Kimba and the Flinders Ranges still face the very real possibility of the nuclear waste we produce here in Australia.  Can you help us celebrate this win and keep our important anti-nuclear campaigns going with a donation to Friends of the Earth today?