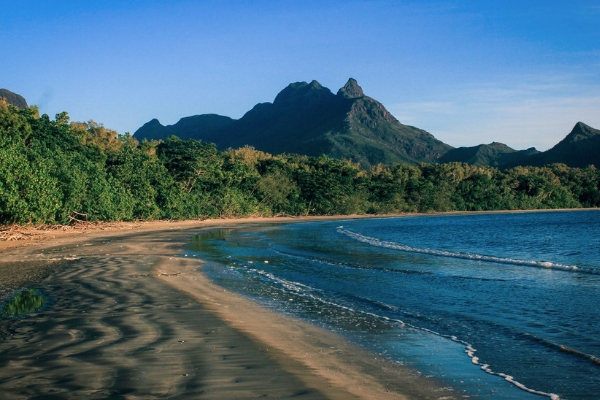 Queensland state tourism minister Kate Jones has announced she is opening Hinchinbrook Island, Great Sandy Strait and Coolum National Park for business. Hinchinbrook is precious to north Queenslanders. Its wild coastal beaches and crocodiled creek crossings are a coming of age for wilderness bush walkers up here. It's the land of the Girramay people.

On offer is a business partnership with leaseholds of 60 years. Jones is offering public money to develop infrastructure within the public park for developers' private profit. She proposes exclusive and expensive glamping cabins along the track with associated infrastructure placed in this natural environment. The heavy footprint of 'man' is coming.

If ever there was a time to let things be, now is the time. Species extinction crisis, threatened and endangered animals vanishing and habitat destruction signal a rapidly dying planet. National Parks and World Heritage protections were put in place in order to safeguard and protect biological diversity.

In the lead up, key proponent Brett Goffrey was appointed by Minister Jones to be chair of Tourism and Events Queensland. It is his private business, the Australian Walking Company, which is one of three applicants in the expressions-of-interest process. Goffrey is in a valuable revolving door. The state government will build the infrastructure and gift the successful applicant the public asset for personal profit. Exclusive glamping cabins will be offered to the rich. Subleasing will be allowed but no bond has been discussed for damages which might occur.

Three islands are to be developed for private leasehold. One of them is Hinchinbrook, a World Heritage listed biological haven which is listed as the second most irreplaceable ecosystem on the planet out of 170 top World Heritage site. The Thorsborne Trail is iconic, globally ranked as one of the 10 best wilderness walks in the world, unique and rare.

National Park management should not be creating exclusivity so only the top end of town can afford to be with Nature and enjoy the National Parks experience. Parks belong to everyone.

As the island experiences a seasonal wet there is an eight-month window to visit the island. The management plan is capped at 40 people at once to minimise environmental impacts and create a remote experience. With cabins booked, the general public will be locked out.

History has shown many of these type of developments on islands or along the coast are in ruin. They have never supported regional communities. Cape Richards Resort and Port Hinchinbrook are two local tourism developments that failed economically. Both were fatally exposed to tempest with properties still recovering from Cyclones Larry, Yasi and Debbie in the past 14 years alone.

National Parks have always had a policy of locating private development outside the National Parks: adjoining or near the Park. Whenever the privatisation of commercial activity is allowed within the National Parks, even if ecotourism, their profitability will become the management driver rather than the principle of conserving the environment. No-one is opposed to appropriate ecotourism, but it must not interfere with biodiversity and other management principles.

National parks belong to "the people"; a public good. It is a fundamental government responsibility to take good care of the public good, out of the public purse. Government is the guardian of our national treasure; it should not be, as poet Judith Wright wrote, "You cannot keep cutting steaks off a bullock and expect it to stay alive."

An area placed under protection for its natural values should attract certainty of protection, particularly when Queensland Parks contribute $4.3 billion in tourism dollars every year. Tourism in Parks collects 28% of the money brought into Queensland on less than 7% of land. To say Parks are not contributing to the economy is laughable. Most of the tourism employment is in associated services based outside the Park.

From a sudden announcement, the collective wisdom of regional communities has been ignored. Potential development should be created outside the park and geared to support economic development of a local community. This would require integrated efforts by the government to build relationships, consult with and invest in the community.

To date a sham community consultation process was conducted after public outrage. Due process has failed. The minister's department facilitated a half-day of consultation, 20-minute individual meetings, only giving the community two days' notice of meeting. This is clearly a failure of public servants operating in democracy. They have succumbed apparently to pressure from sneaky capital.

The cardinal principle of National Parks is for 'the permanent preservation of the area's natural condition and the protection of the area's cultural resources and values', not creating a recreational playground and diminishing biodiversity.

Please write or call tourism minister Kate Jones to register your opposition, and ask environment minister Leeane Enoch why she is failing to protect the cardinal principle: Enough is Enough. Public Parks not Private Playgrounds.

We are seeking people from anywhere in Australia (but particularly in Queensland) who are interested in helping to build grassroots activity to protect National Parks from inappropriate development.

Ingrid Marker is a member of Friends of the Earth Far North Queensland.