How to respond justly to climate change displaced persons 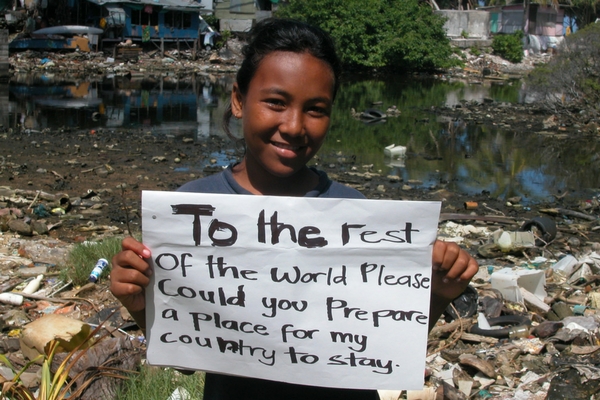 Climate change poses an enormous threat to human security in the 21st century, with the most devastating impact predicted to be displacement and forced human migration.

The UNHCR warns that the potential scale of such movement could range from 25 million to one billion people by 20501 while the International Organisation on Migration projects a figure of 250 million by 2050.2 We are already witnessing global impacts such as more extreme and increased weather events, sea-level rise and severe droughts and will continue to see a rise of a new category of refugee that is not currently defined or protected under international law: the Climate Change Displaced Person (CCDP).

The UNHCR reports that more people are now displaced by natural disasters and the impacts of climate change than by conflict. Close to home, a 2011 report released by the London School of Economics warned that by 2050, Pacific nations alone could be grappling with up to 1.7 million climate migrants.3 This movement of people, both internally (within their country of origin) and externally (trans-border), in response to climate-induced events, calls for an urgent global response.

Within the Convention's definition, no clear provision for CCDPs exists and therefore these victims cannot currently be legally afforded refugee status.

Can this crisis be effectively addressed by expanding the mandate of the Refugee Convention to include provision for "climate change refugees"? The short answer is 'no'. On the surface, this option appears to be the most logical course of action and tends to be the "default" policy response to the situation. The reality is, however, that there are mitigating factors that would render such an approach dangerous.

One key issue is that, owing to the refugee definition requiring the crossing of international borders, an expansion of the current definition would exclude the vast majority of CCDPs who will be displaced within their own countries. While there will be many cases where climate induced displacement will require the crossing of state borders, the vast majority of CCDPs will remain in their country of origin, meaning that under the Refugee Convention, these victims would remain unprotected.4

The International Organisation on Migration rejects the term "environmental refugee" or "climate refugee", preferring to use the term "environmentally displaced person", believing that the term "refugee" should remain limited to trans-boundary flight, mainly because the Refugee Convention is 'restricted to persons who cannot avail themselves of the protection of their home state for fear of persecution'.5

While the UNHCR has recognised the rising numbers of CCDPs and has had some involvement in assisting people internally displaced by natural disasters, it states that fundamental differences between the externally displaced and internally displaced raise major points of contention. The organisation warns that expanding the scope of the existing Refugee Convention to accommodate CCDPs would be a counter-productive response, citing a fear of a reduction in protection for traditional refugees whom it already finds itself stressed and under-resourced to protect and assist. It argues that to place both groups together under the same mandate would 'further cloud the issues and undermine efforts to help and protect either group and to address the root causes of either type of displacement'.6

A frequently raised argument is that those displaced by climate change could still theoretically rely on the protection of their national government, therefore differentiating them from traditional refugees whose states are often the source of persecution. In a sad irony, however, the vast majority of CCDPs will be from poorer, developing countries where other major contributing factors, such as development, population and socio-economic pressures, political instability and civil war will be compounded by the effects of climate change. This fact is particularly sobering because countries that have contributed least to climate change are the ones who will be the worst affected. While states are legally required to protect their citizens in cases of displacement, they are often unable, and sometimes unwilling, to do so.

A case in point is Kiribati, a small Pacific Island nation suffering from the effects of sea-level rise which is swallowing up available land and contaminating the fresh water lens, rendering the land infertile. Kiribati's residents live a subsistence lifestyle and its per capita CO2 emissions are 0.3 tonnes – minute when compared to Australia's per capita emissions of 28 tonnes.7 In the short term, citizens are being internally displaced and forced to move to safer areas. Inevitably, however, the entire population of Kiribati will have no other option but to relocate altogether.

While resistance by the UNHCR and International Organisation on Migration to define victims of climate change displacement as refugees might appear to contravene their fundamental humanitarian ideologies and principles, we must consider the legal ramifications and subsequent responsibilities that would result from such a move. Experts agree that due to the sheer scale and projected number of those likely to become displaced, it would very likely be to the detriment of both "traditional" refugees, whose status is clearly defined, and CCDPs if both groups were placed under the same mandate.

Ultimately, the Refugee Convention was established 60 years ago (decades before awareness of climate change and CCDPs arose) in response to the escalating refugee flow in post-war Europe and its aim is to protect those facing the type of persecution based upon one of the reasons explicitly set out in Article 1A(2).

Finally, the Refugee Convention deals only with adaptation and does not have the capacity to establish and incorporate vital long-term, pre-emptive, managed migration. It is crucial that we acknowledge the issue and implement planning measures so that victims of climate change displacement don't become "refugees" in the first place and that they can 'migrate with dignity'.

Climate change displacement is an incredibly complex and multi-faceted issue that requires a new, legally-binding, stand-alone Convention to ensure the needs of this new group of 'refugees' are sufficiently met, without detrimentally affecting the needs of 'traditional' refugees. The multi-causal nature of climate change displacement is a critical factor that must be taken into careful consideration by policy makers. The sheer scale and complex nature of climate change displacement requires a specialised solution; a "one size fits all" policy response is not going to be effective. A CCDP Convention must incorporate international, regional and national responses that are informed by a bottom-up approach that encourages the involvement and input of displaced citizens and communities, which, in turn, would assist in increasing transparency and accountability.8

The overwhelming disparity regarding the cause and effects of climate change and resultant displacement highlights the importance of the inclusion of principles of climate justice. Richer, industrialised nations, whose CO2 emissions have overwhelmingly contributed to climate change, have a deep moral obligation to fund and resource efforts to assist those who are, and will increasingly, suffer as a result. Australia must take climate change mitigation seriously and our government must ensure we take the lead in providing assistance and protection to our neighbours in the Pacific Islands region.

Unlike the Refugee Convention, a CCDP Convention could be dual-focused, with emphasis placed on adaptation and response. The implementation of anticipatory, managed migration systems would provide a means for inhabitants of nations threatened by slower-onset effects, like Kiribati, to retain a certain amount of control over their relocation and for the process to be one of pre-emptive resettlement rather than refugee flight.

While the CCDP issue is complex and one cannot claim to have every answer to a problem there is still so much to learn about, it is clear that expanding the existing refugee regime is not a suitable option as it would potentially hinder, rather than protect, CCDPs. Without a new protection framework, the situation that CCDPs will face could result in a global humanitarian catastrophe. The international community must act in solidarity to fulfil their moral and, hopefully, in the future, legal obligations, to minimise the impacts of this crisis.

Claire van Herpen is a Melbourne-based member of Friends of the Earth's Climate Frontlines Collective.

Her full dissertation is posted here.