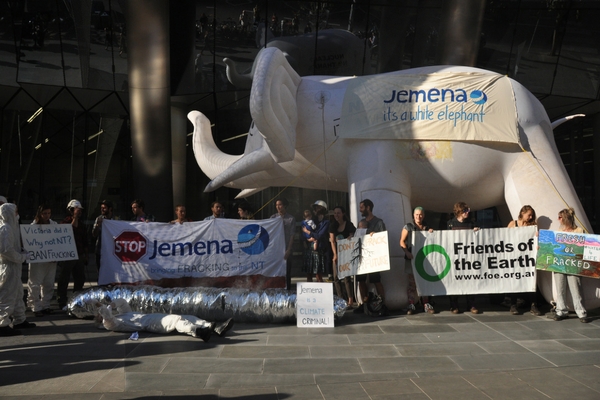 A crowd of concerned citizens joined Friends of the Earth and Quit Coal out the front of Jemena in Melbourne to protest the Federal approval of the 622km Northern Gas Pipeline from Tennant Creek to Mt Isa.

They are concerned that Jemena’s pipeline will open up the NT to an onshore gas industry - including utilising the controversial and dangerous hydraulic fracturing (also known as fracking) extraction method.

A 5m tall white elephant was inflated out the front of Jemena headquarters showing the pipeline to be exactly what it is - expensive, useless and unwanted by many in the Northern Territory.  There was also a smoking pipeline installed. This was the second protest to happen outside Jemena ín the last month.

Click here to find out more about this project 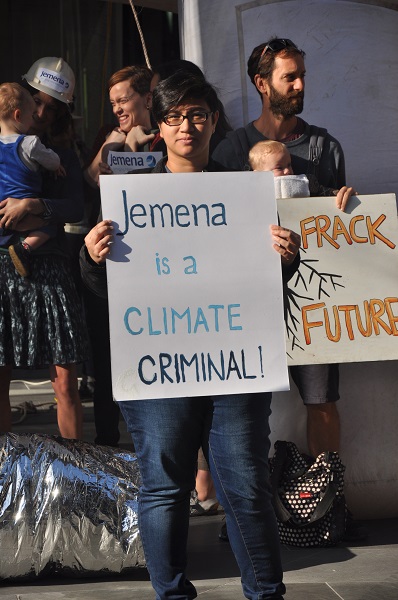 “Being the first state in Australia to secure a permanent ban on Unconventional gas - we really want to see other states follow our lead and protect land and water,” says Phil Evans, Friends of the Earth spokesperson.

“The Northern Gas Pipeline is a dangerous investment in fossil fuels and the fracking industry at a time when the Australian people are calling for investment in renewable energy and the long term clean jobs that will follow.

“If Jemena build this pipeline, they will become climate criminals - the science is clear, we have no room for new gas - or any new fossil fuel infrastructure. This project is a climate white elephant and goes against our commitments to climate action and emission reductions targets.

“Both Jemena and the Australian Petroleum and Exploration Association (APEA) have been very clear that the pipeline is designed to open up new onshore shale gasfields across the Territory - including fracking.

“For the NT government to approve a gas pipeline designed to prop up the fracking industry in the Territory is a betrayal of trust in the current NT Fracking Inquiry process and the current fracking moratorium. 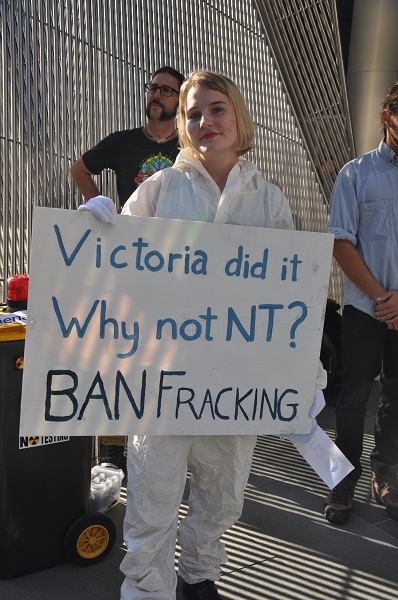 “This project has been described by financial analysts and industry experts, such as APEA, as the ‘whitest of white elephants’ if fracked shale gas is excluded from the pipeline. So why did it gain Federal approval when the NT has a moratorium on fracking and is investigating a permanent ban?