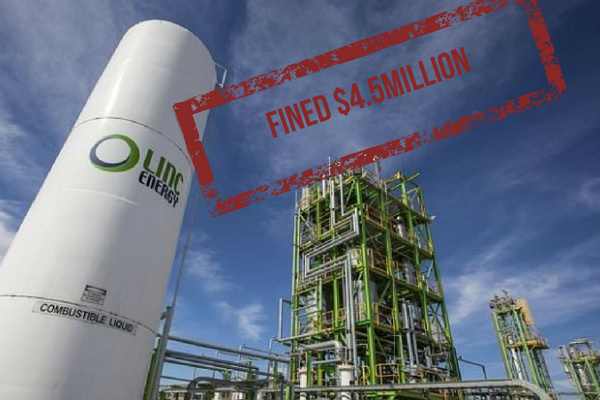 After an earlier conviction for causing serious environmental harm at their underground coal gasification plant in Queensland, Linc Energy have been fined $4.5 million.

Linc Energy was charged with five counts of wilfully and unlawfully causing serious environmental harm between 2007 and 2013 at their experimental Chinchilla plant.

It was found that Linc Energy grossly mismanaged underground burning of coal seams. This caused the rock to fracture and allowed the escape of toxic gases which contaminated the land, water and air.

Judge Michael Shanahan said "Linc was well aware of the damage being done … and attempted to hide it from the regulator."

Judge Shanahan was unsure how the company would pay the fines given that it was in a state of liquidation.

Five of Linc Energy's executive directors are due to face court in July after being charged with failing to ensure compliance of the company.

Despite the failure of this unproven technology at Chichilla and the subsequent banning of the process by the Queensland government, plans are afoot for another underground coal gasification facility at Leigh Creek on Adnyamathanha land (South Australia).

The Adnyamathanha Traditional Lands Association (ATLA) are joined by Friends of the Earth and many others in condemning the Leigh Creek Energy proposed project in light of the Linc Energy disaster.

Back in April, the ATLA CEO Vince Coulthard said to local media that it is time to “heal this area, not fill it with poison”. Adnyamathanha Traditional Owners are also facing a threat from a national nuclear waster dump.

"There is no room for this dangerous, high emissions technology in a forward thinking country."

Friends of the Earth are calling on the Federal Environment Minister, Josh Frydenberg, to ban this dangerous technology.