Morrison to shift climate funds to carbon capture and storage 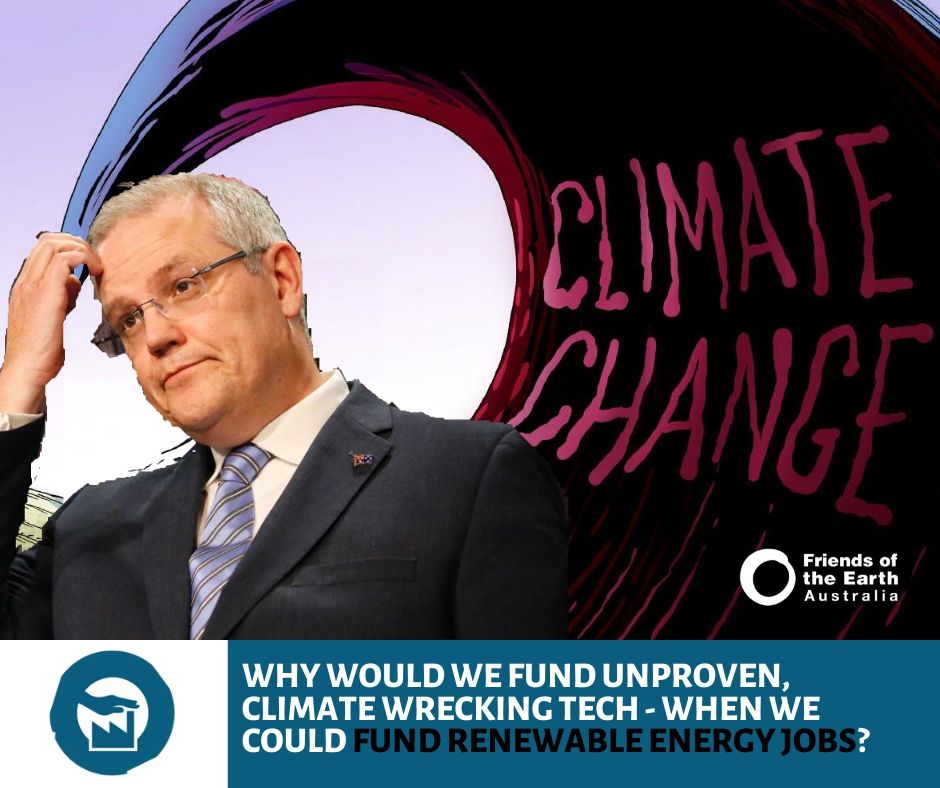 In a backwards move, the Morrison government has released the findings of the “King Review” into Australia’s emissions reduction policies, and has decided to open up climate funding to carbon capture and storage projects (CCS) and to big greenhouse gas emitters.

By releasing this plan before the review of the Emissions Reduction Fund being carried out by the government’s Climate Change Authority is released, the government is undermining its own Authority.

The findings of the King Review were released by federal energy and emissions reduction minister Angus Taylor on Tuesday. The federal government is expected to adopt recommendations for the $2 billion Climate Solutions Fund, as well as Australian Renewable Energy Agency (ARENA) and the Clean Energy Finance Corporation (CEFC), to be opened up to providing funding to heavy emitters and fossil fuel projects.

The review has been criticised because of its heavy reliance on people connected with the fossil fuel industry. It is led by former Origin Energy CEO Grant King.

The Morrison government has agreed to establish two new abatement categories under the Emissions Reduction Fund; one for carbon capture and storage, and another to award abatement permits to major industrial emitters which reduce emissions below a baseline set under the Safeguard Mechanism.

“This looks exactly like the COVID 19 Commission, which has been set up by the federal government to help the Australian economy emerge from the C-19 pandemic” said Friends of the Earth campaigns co-ordinator Cam Walker. “It is a hand-picked group of fossil fuel promoters. How can the community have trust in the government’s plans to restart our economy if it’s just promoting a ‘business as usual’ approach that’s based on propping up dirty technologies?”

Carbon capture and storage projects have a long history of absorbing huge volumes of public funding, with no outcomes for the community or climate. CCS is useful in some industrial processes but it is a pipedream to think it offers a lifeline to coal or gas.

A report from The Australia Institute, called Money for nothing, says that the Australian Government has already put $1.3 billion of taxpayers’ money towards CCS initiatives since 2003, with 'zero large scale operational projects to show for it'.

"Despite years of generous taxpayer funding, there are no large-scale CCS projects operating in Australia and no planned coal CCS projects at any stage of development".

“So why is the federal government backing this dead end technology again? Because of its ideological alignment with the fossil fuel industry. They are failing the Australian people, undermining commercially viable technologies like wind, solar and energy storage, and avoiding taking the steps that are required if we are to have a hope of avoiding climate catastrophe.”

The massive investment of public funds into economic stimulus packages provide a watershed moment for Australia. We have the opportunity to set a path towards a sustainable future. However, today’s announcement confirms the fact that this government is unwilling to break from the technologies of the past”.

For background on why CCS is not going to solve the climate crisis of fossil fuel use, please check these resources: