My story of Students of Sustainability 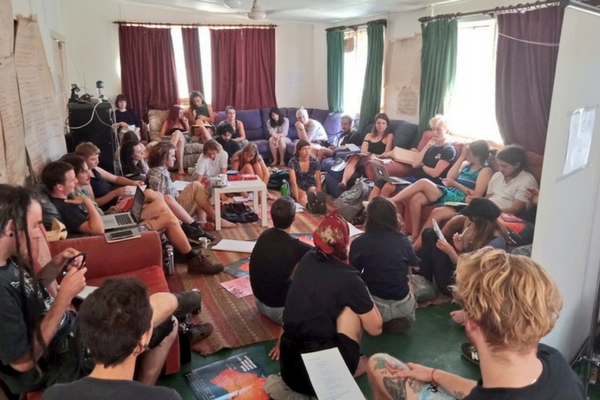 By Cam Villani and Stephan Encisco

In July 2015, I attended a week-long conference called Students of Sustainability (SoS), a five-day conference that brings together people from all over Australia.

Having been new to campaigns and the environmental movement at the time, I was eager to be involved in anything I saw that was related to looking after the planet. So I booked despite having almost no idea of what it was, or what to expect across the five days. I then felt apprehensive about attending, I was in Melbourne and the conference was in Adelaide, and despite the attendance of around 500 people none of my friends were going.

They sent an email out in the days leading up to it explaining what we should know before attending SoS; what to bring (e.g. the usual camping equipment, warm clothes, plate, toothpaste etc.), the general plan of the conference, and a document of several pages. In this document it explained what we needed to be mindful of; how we should respect others' boundaries and make spaces that are free from sexism, racism, transphobia, ageism etc.

The day before it started I made my way there by Vline train and coach. I figured other attendees would also be travelling this way, and at Southern Cross station I looked around and saw a group of people carrying large rucksacks like me, obviously going to camp somewhere. At Ballarat the train connected to a coach, and all of these people got on the coach with me. They all sat facing each other and subtly noticing me, soon after I asked if they were going to a conference in Adelaide, unsurprisingly they said yes and most of them then said hi to me. This crew of 20 or so people suddenly no longer felt like strangers and I slowly got to know them over the next seven hours of the trip.

I arrived at night to a university campus in Adelaide's suburbs, there was an oval where the bulk of us were camping, some marquees set up to cook food and for us to eat and hang out in, the usual bathroom facilities, and the reception in a nearby building.

On the first morning the First Nations people did a welcome ceremony. They then spoke about their struggles with mainstream society, it felt sad and overwhelming but also incredibly important. They said something I continue to remember and think about: "the system isn't working for me, and it's not working for you either, I want to walk not behind you, in front of you, or beside you, but with you."

Each morning started off with a plenary where all of us would gather and listen to a series of speakers. Throughout the day there were many workshops, filled with topics I eagerly wanted to learn about, so eagerly that I remember spending several minutes deciding which one to go to next. Many of these topics were uncomfortable to discuss but really important. I attended interesting ones on: dealing with calling out racism, how to deal with sexual violence without involving the police, how to build relationships with Aboriginal people for different campaigns, how to develop good facilitation skills, and how to implement principles of decentralisation in organising spaces. These workshops were run by ordinary attendees like myself who had lots of knowledge in particular things. At night we all gathered in the large marquees and had dinner together, followed by some kind of entertainment, usually live music.

It was an amazing week, bringing home something I had only previously understood in an abstract way: politics is very much social. It's easy to become cynical, disillusioned, and depressed, when you aren't surrounded by people who care about the same things you do. The space of SoS fosters a community where everyone is encouraged to contribute to the collective, share knowledge, and participate in meaningful action with the aim to go into depths into the problems that occur in society. At the end of the conference someone said to us "never stop learning", this felt odd at the time because after all that I learned that week I didn't think there would be much more. But I was wrong, and I continue to learn surprising things about society that had been put in a way that I didn't understand before, such as how harmful the status-quo is to people, climate change being an important issue of social justice, the history of violence towards women, and what colonisation really means.

What I like about it is the focus on collective practices in addressing structural problems. We are articulating the challenges posed by the present ecological crisis, not merely to our energy supplies or regulatory regimes, but to the foundations of our economic and social system; to the stories we tell, how we think, what we create and who we are. I used to think that protecting the environment was less important than tackling homelessness, for example. But now I've understood a little more about the intricate links that all campaigns share with each other. When Indigenous peoples around the world are the first and worst impacted by climate change, then it is obvious to me that climate justice and social justice are one and the same.

Individual lifestyle choices, like not eating meat or not buying Nike shoes, are not by themselves going to bring about the structural change that social justice demands. For that, we need people committed to organising collectively and willing to take part in a diversity of tactics. The more I learn about climate change, the more I understand those who want to lock themselves onto a conveyor belt, to protest unsustainable industries that wreck the planet for the sake of profit.

I didn't see myself as an activist, and I didn't think I would enjoy being in the company of self-styled activists. Across the week I met some of these so called "irresponsible, violent troublemakers": lovely, thoughtful people who cared about making the world a better place. I met the people that I'd seen on TV getting arrested, or read about in the newspaper, and I decided that they were some of the most reflective, considerate and intelligent people I had met.

This year in early July, SoS will be in Melbourne. I am looking forward to it already, because I'm convinced that we are in a state of climate crisis and that we need to build capacity to fight what is happening.

The conference is open to anyone with a passion for sustainability and for making a difference to their lives, the lives of those around them, the community and the environment. Just to be clear, students are anyone willing and eager to learn! Everyone from all walks of life and all ages are invited to attend. Don't have any preconceptions, at SoS your world will be opened, you'll meet amazing people, be introduced to great ideas, come up with the ideas yourself, through this constructive discussion.

Attend the Facebook event to stay up to date with important messages and memes from the SoS crew :)