What a huge and amazing year it's been for Friends of the Earth Australia!

As we pass through our 45th year it has felt especially important to reflect on all the ways our network has expanded and evolved - we are thriving more than ever!

For the many of us who have joined the network in the last 10 years, there is an important sense of privilege and respect for the history we have inherited. We thank the many people who have come before us and our long-time supporters, as we enjoy all the fresh energy and creativity in the space.

See below for just some of the many events and actions that are taking us up to the end of the year.

We wish you all a special, safe & anti-capitalist festive season!

45 Years of FoE on Dirt Radio

As part of the celebrations for Friends of the Earth Australia's 45th Birthday, our Dirt Radio team have been working to produce a retrospective radio history series on 3CR looking back at the amazing work FoE has done over the years. This has involved interviewing people who have been involved with a number of different campaigns over the years, from Anti-Nuclear, to Anti-Roads to the Food Coop. It has been so inspiring to revisit some of the historic moments in our history, look back on the radical roots of the organisation and make connections to the work we still do to this day. The series is well underway and can be listened to LIVE on 3CR 855AM or online every Tuesday from 3-4pm.
Podcasts of the show are now available here. 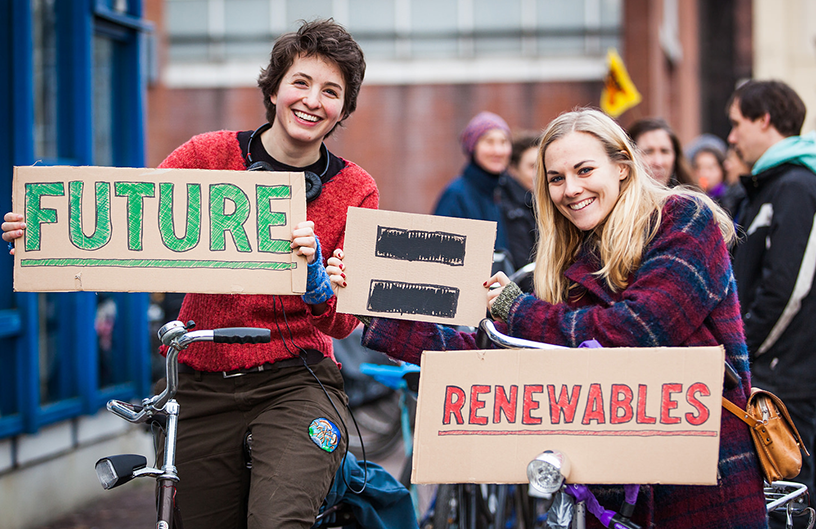 Coal power generation is the single largest contributor to greenhouse gas emissions in Australia, being responsible for over one quarter of total emissions. Given that burning coal is our leading contributor to climate change, moving our electricity supply away from coal is one of the quickest, most efficient ways of doing our part to act.

There is a pathway to avoiding the worst impacts of climate change, and avoiding a catastrophic rise in global temperatures. Retiring every coal-burning power station over the next decade — and replacing them with clean energy generation and storage — is the simplest and most effective way for Australia to do our fair share of reducing greenhouse emissions to a safe level. It's our best shot to tackle climate change, protect people, and protect our planet's natural places. That is why we have joined together with six other community-based groups to launch the Beyond Coal campaign.

This week, the leaders of many countries will gather in Madrid for the next round of climate change negotiations. The UN Secretary-General Antonio Guterres has warned that, without meaningful and co-ordinated action, global warming could pass the “point of no return” soon, and called for the world to find more political will to combat climate change. Our war against nature must stop”.

The UN climate frameworks are deeply flawed. But as a global problem, we need a global solution to climate change. While we are under no illusions about the negotiation process, we have a team in Madrid, who have joined trade unions, indigenous organisations and many allies in the environmental movement and civil society to try and get the best possible outcomes from the process.

We are deeply concerned about many of the economic approaches being developed through the UN process. Our critique of carbon markets is available here.

Support important environmental campaigns while looking great! Or gift yourself, friends or family a holiday present.

Plenty of styles and campaigns to look through. Visit the store here. 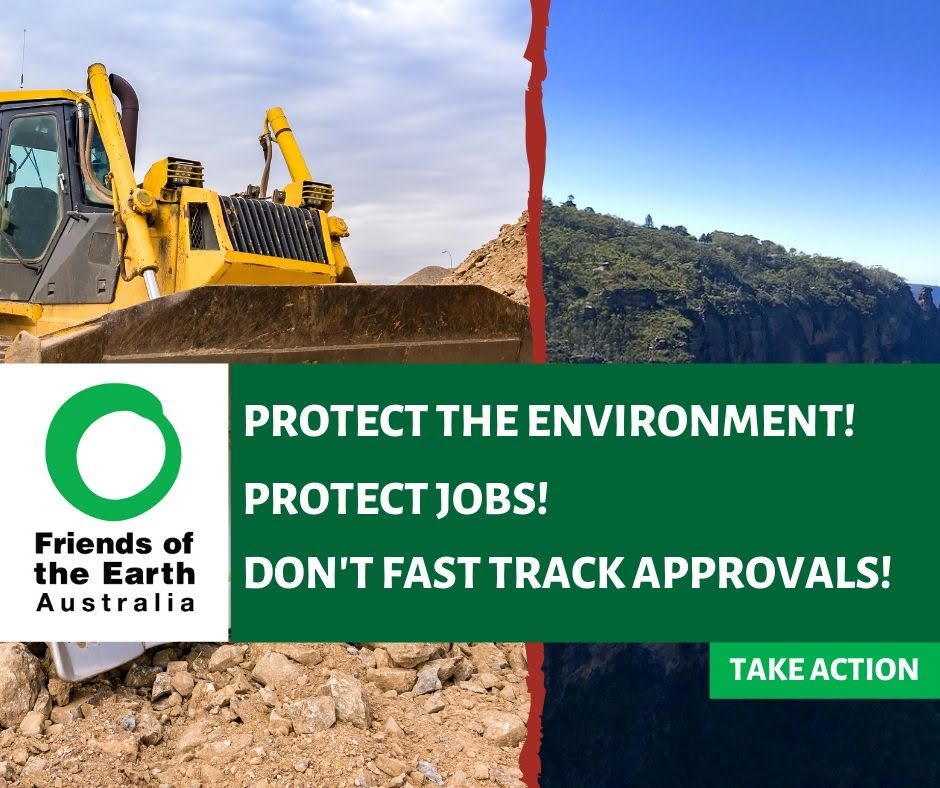 Instead of reducing environmental assessment of major projects, Scott Morrison needs to implement a new set of federal environmental laws, which will actually do their job: protect the natural environment from major threats.

While we have never had a perfect national approvals system, it is essential we do not lose the processes currently in place. And we need to build a set of new laws that are fit for purpose for the challenges we face in Australia in the 21st century.

A truly national approach to environmental protection would build on Australia’s international responsibilities and the federal government's capacity to bring authority and resources to environmental governance. Find out more about this important issue here. 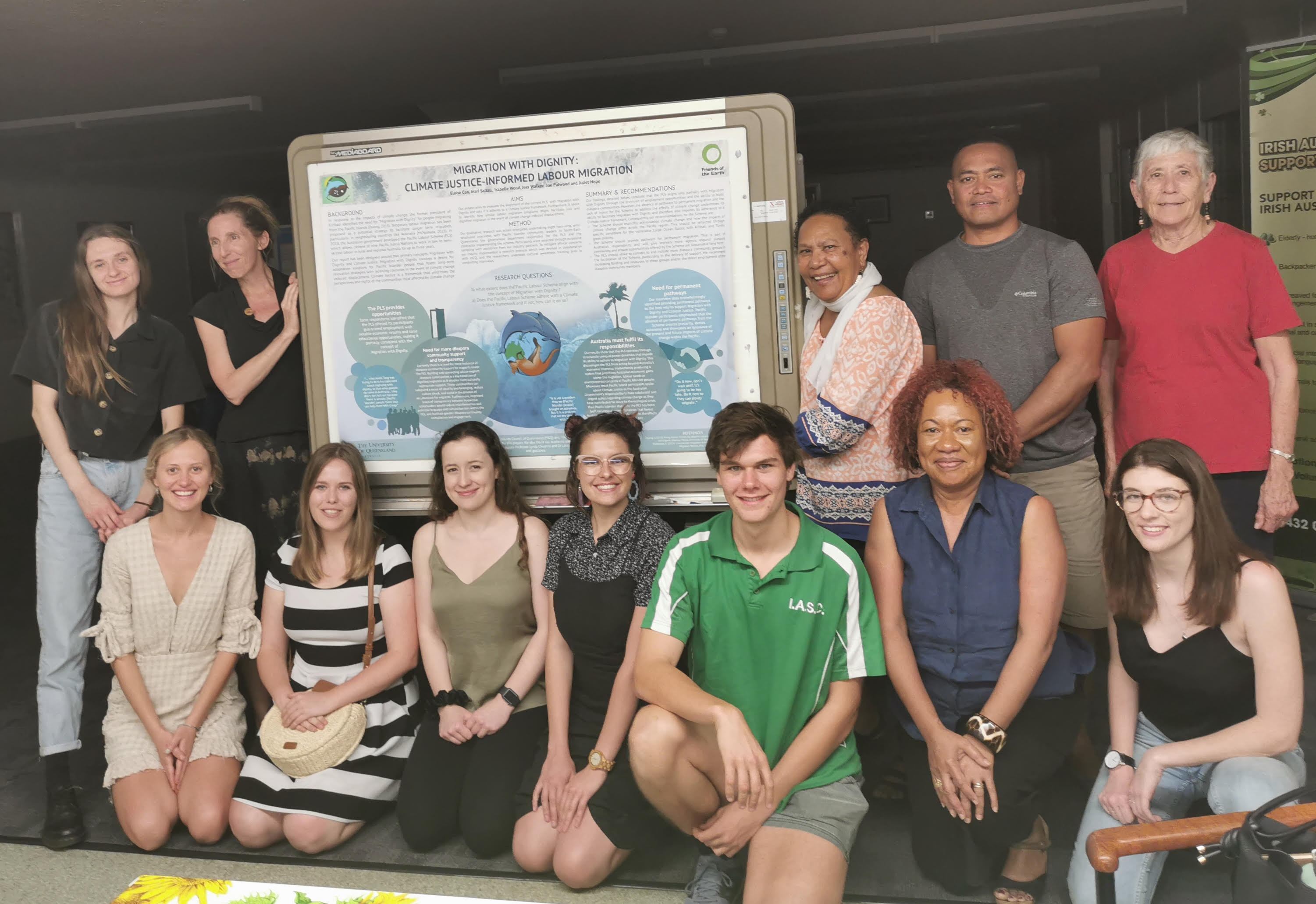 On 18th November, a group of 6 Social Science students from the University of Qld delivered the final report of their research project, titled "Migration with Dignity: Climate Justice Informed Labour Migration".  The two groups partnering with the students were FoE Climate Frontlines and the Pacific Islands Council of Queensland (PICQ). The PICQ representatives at the presentation elaborated on the ways in which the research will inform their support for participants in the Pacific Labour Scheme as well as their advocacy with relevant Australian government agencies and contractors.

For a copy of the report contact [email protected]

Government and ‘opposition’ sign off on uncontrolled GM experiment

The Federal Government and Labor Party have submitted Australians to a nationwide genetic experiment, by failing to support a Greens’ motion disallowing amendments to the Gene Technology Regulations. The amendments allow most animals, plants and microbes modified using CRISPR and similar techniques to be released into the environment and food chain without any risk assessment.

The changes effectively turn Australia – our ecosystems and our health - into a giant genetic engineering experiment. Read more here.

The Federal government is trying to impose a radioactive waste dump in South Australia, despite State legislation that makes them illegal, opposition from Traditional Owners and a truly flawed plan that’s done nothing but cost money and divide communities.

Please support the communities of the Flinders Ranges and Kimba by sending a submission to the Department of Industry, Innovation and Science.

Get friends, family and co-workers together, eat dumplings and say NO to nuclear waste in SA and host a “Dumplings not Dumps” session.

Write a submission to the Department of Industry, Innovation and Science

Eat dumplings, have fun & take a photo and post with #DumplingsNotDumps and email to [email protected] 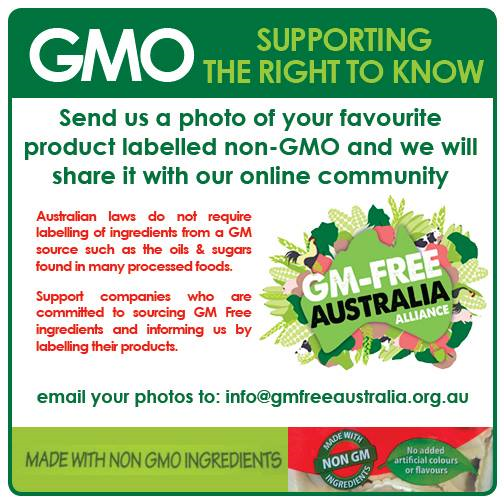 The GM-Free Movement in our country is growing stronger each year thanks to the efforts of all those conscious consumers paving the way by always buying GM-Free.  With both sides of government recently supporting the deregulation of New GM techniques in Australia, it is more important than ever that we educate, promote and connect people to GM-Free foods.

Right now when the world's eye has been turned to the true toxicity of Roundup/Glyphosate, this exposure and the broader implications of Roundup sprayed on GMO crops is now imminent. We are winning!

We are forming a Working Group to publish a bigger and better than ever GM-Free Shopping List 2020 - A free resource Australia-wide that will celebrate and promote GM-Free foods and products.

Our goals are to:

1) Awaken the many people unknowingly consuming GMO foods every day.

2) Mobilise a shift in consumer behaviour in our country to GM-Free shopping.

3) Enable and support all Australians to refuse GMO foods and crops, and

4) Transform the future of GM-Free & Chemical Free food in Australia.

WE NEED VOLUNTEERS for our working group who are willing to help on this project and/or contribute with details of their favourite GM-Free foods to our Shopping List. Please contact us at [email protected]

The recent fire disasters in New South Wales and Queensland has played havoc with koala populations in those regions. Thousands of animals have been reported to have been killed and recent media reports have controversially suggested that the species is effectively functionally extinct.

Friends of the Earth (FoE) is about to embark on further mapping of koala habitat in the Strzelecki Region of Victoria. The next round of surveys plans to take place in 2020, plans to survey 200 sites. We are interested in better determining the range of the animal and key populations. This map shows areas that have been surveyed and also shows areas that have not been properly surveyed. Read more here. 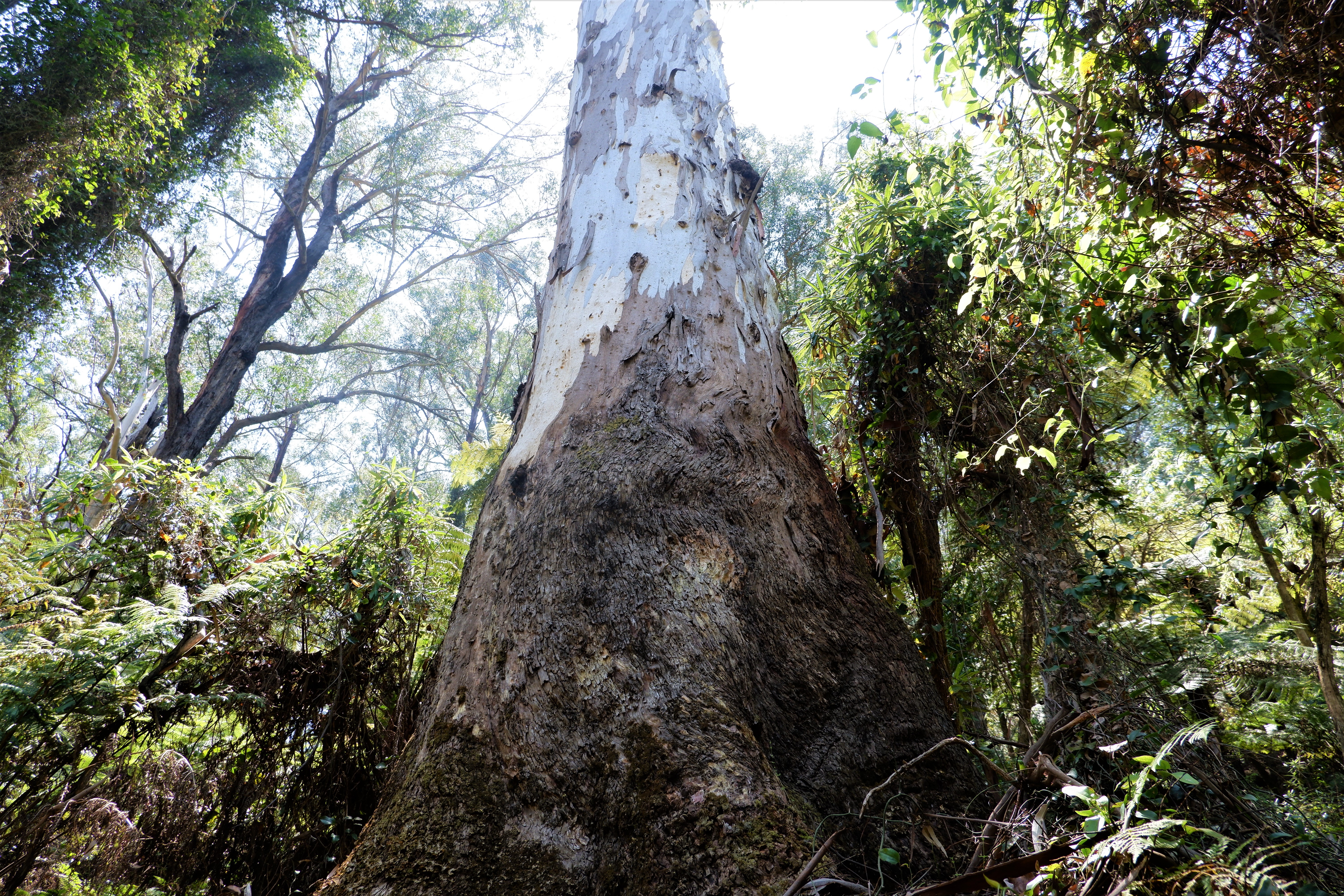 The Victorian Premier Daniel Andrews and Environment Minister D’Ambrosio have announced that all native forest logging will end by the year 2030, as well as committing to immediately protect 90,000ha of old growth forests from logging. An action statement for the threatened Greater Glider was also released after 2 years of inaction, along with immediate protection of small areas of forests across the state.

Goongerah Environment Centre (GECO) has welcomed the announcement after 5 years of silence. This has been the result of years of hard work, campaigning, and widespread calls from communities across Victoria for the logging of native forests to end. But there’s a long way to go in terms of securing formal and widespread protections for native forests.

The Andrews government announcement has locked in another decade of logging forests to feed the Australian Paper mill. The 2030 date coincides with the end of government contracts with Australian Paper. Forests which are critical to Victoria’s water supplies, mitigating the effects of climate change, and providing homes for species on the fast-track to extinction, will keep getting logged for Reflex paper for another ten years. This is in the face of a worsening extinction and biodiversity crisis, drought, and increasing bushfire risks. It's unlikely the forests will last the next decade given these ecosystems are on the brink of collapse.

The campaign for the protection of Victoria’s forests is far from over. The government has finally broken its paralysis and acknowledged that native forest logging is unsustainable, and that logging of old growth forests can’t continue. Now it is critical that the government act on their commitments and move to formally protect Victoria’s precious and threatened forests. GECO will continue to hold the government to their announcement, and campaign for widespread and formal protections for East Gippsland’s forests, including old growth forests which are still being logged right now.

Come to Students of Sustainability 2020! 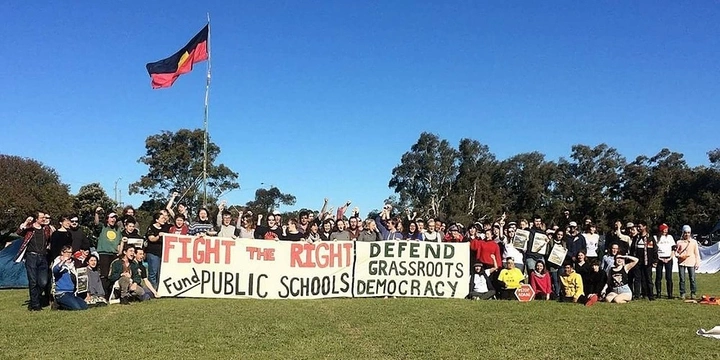 Students of Sustainability is happening again in January Mon 13th to Fri 17th next year (2020).  This time in Sydney out at USyd's Cumberland Campus in Lidcombe on Eora country. This grassroots convergence and critical education space aims to  empower new and diverse generations of people to participate in the climate justice movement. We bring together activists, researchers, and progressive voices from across the country to participate in it.

Basically the conference takes on the idea of getting to depths of the problems in our society.  Which is especially important now, as neoliberalism shows it’s flaws, impending are the threats of climate change, ecological collapse, and world wars as governments around the world take to populist policies. We are now at a time where technology has enabled information to be widely shared to the point where we can educate ourselves out of the oppressive problems in society.  Many people are waking up to the mess we have gotten ourselves into. Students of Sustainability is one such way, where people from all across so-called Australia gather each year for ~5 days.

We’ll hold workshops, discussions, and talks, we share ideas, camp together, eat together, hang out together.  To learn new things about the deeply rooted problems in society, to learn new ideas about what we should be doing in our activism and our lives in the face of structural and systemic oppression, to learn skills that equip ourselves and our movements so that we can work and fight towards a better future, and most importantly to take action now to build and mobilise our movements.  This is a conference like no other, be prepared to have your mind blown by what you’ll learn. You’re invited and everyone is welcome! Get your tickets here!

Want to receive this update via email? Subscribe here