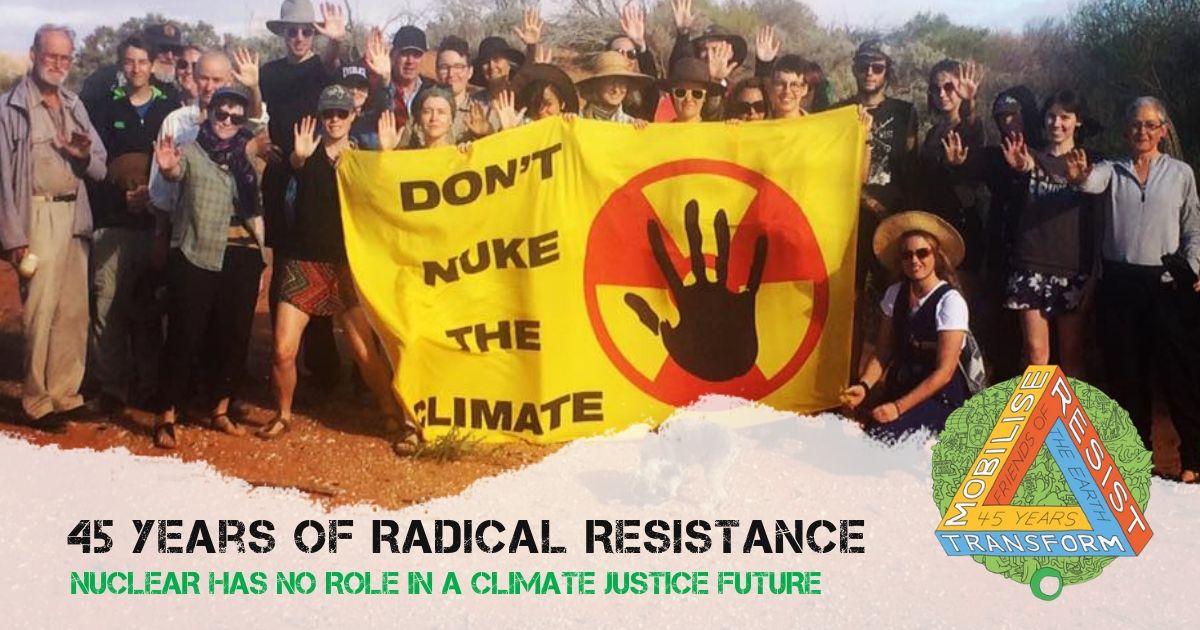 There are several problems with the nuclear “solution” to climate change — it is a blunt instrument, too slow, too dangerous, and it is unnecessary.

Nuclear power could at most make a modest contribution to climate change abatement. The main limitation is that it is used almost exclusively for electricity generation, which accounts for about 25% of global greenhouse emissions.

Expanding nuclear power is impractical as a short-term response to the need to urgently reduce greenhouse emissions. The industry does not have the capacity to rapidly expand production as a result of 20 years of stagnation. Limitations include bottlenecks in the manufacturing sector, the dwindling and ageing workforce, and the considerable time it takes to build a reactor (typically 10 years) and to pay back the energy debt from construction (which can be six years or more).

In Australia, it would take 5− 10 years of planning before reactor construction could begin, then 10 years to build a reactor, then another 6 or so years to pay back the energy debt from construction. Thus it would take at least 20 years before nuclear power could even begin to help reduce emissions.

All nuclear power concepts (including “next generation” concepts) fail to resolve the greatest problem with nuclear power − its repeatedly-demonstrated connection to the proliferation of nuclear weapons.

The greenhouse benefits of a global doubling of nuclear power output would be small but the same cannot be said of the proliferation risks. Doubling nuclear output by the middle of the century would require the construction of 800− 900 reactors to replace most of the existing cohort of reactors and to build as many again. These reactors would produce over one million tonnes of nuclear waste (in the form of spent fuel) containing enough plutonium to build over one million nuclear weapons.

UNSW academic Dr Mark Diesendorf argues: "On top of the perennial challenges of global poverty and injustice, the two biggest threats facing human civilisation in the 21st century are climate change and nuclear war. It would be absurd to respond to one by increasing the risks of the other. Yet that is what nuclear power does."

Former US Vice President Al Gore has summarised the problem: "For eight years in the White House, every weapons-proliferation problem we dealt with was connected to a civilian reactor program. And if we ever got to the point where we wanted to use nuclear reactors to back out a lot of coal ... then we'd have to put them in so many places we'd run that proliferation risk right off the reasonability scale."

Running the proliferation risk off the reasonability scale brings us back to climate change — a connection explained by Alan Robock in The Bulletin of the Atomic Scientists: "As recent work ... has shown, we now understand that the atmospheric effects of a nuclear war would last for at least a decade — more than proving the nuclear winter theory of the 1980s correct. By our calculations, a regional nuclear war between India and Pakistan using less than 0.3% of the current global arsenal would produce climate change unprecedented in recorded human history and global ozone depletion equal in size to the current hole in the ozone, only spread out globally."

Energy expert Mycle Schneider notes that countries and regions with a high reliance on nuclear power also tend to have high greenhouse emissions:

A significant and growing body of scientific literature demonstrates how the systematic deployment of renewable energy sources and energy efficiency policies and technologies can generate major reductions in greenhouse emissions without recourse to nuclear power.

UNSW scientists propose the following electricity mix for Australia in 2030:

Computer modeling (matching wind and solar resources with demand at different times of the day / year) carried out by the UNSW scientists shows that wind and solar are unable to meet demand only a few times a year, so there only needs to be a small amount of generation from flexible renewables (hydro and biofuelled gas turbines). There is no need for battery storage. The cost of this 100% renewable energy plan is A$7−10 billion per year more than that of the existing fossil fuelled system −  a 50% increase. UNSW scientist Mark Diesendorf notes that the cost "is likely to be less than the damage caused by the increased frequency of heatwaves, droughts and floods in a business-as-usual scenario."

Read a summary of the UNSW research here

It is a myth that all renewable energy sources are incapable of providing reliable baseload electricity (see the briefing paper on this topic posted at www.energyscience.org.au/BP16%20BaseLoad.pdf):

More information on the nuclear/greenhouse debate: