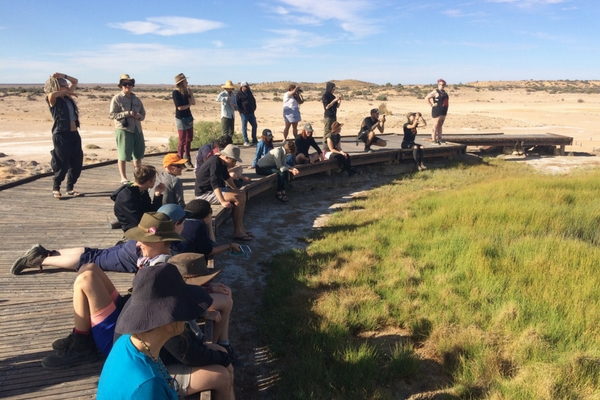 The 28 participants heard from Arabunna Traditional Owner Uncle Kevin Buzzacott and Adnyamathanha Traditional Owner Vivianne McKenzie in Adelaide before heading to Port Augusta, where we heard from Cat Beaton from the SA Conservation Council about the successful campaign to stop SA becoming the world's nuclear waste dump and current nuclear battles.

We camped at Woomera, where we heard from Maralinga veteran and whistleblower Avon Hudson. Avon gave us a tour of the Woomera missile park and explained the purpose behind the mostly failed missile projects tested in the Woomera Prohibited Area. We visited the Woomera cemetery with Dimity Hawkins, who is studying the disproportionate number of infant deaths in the region in the 1950s and 60s including possible links to the British nuclear bomb tests at Maralinga and Emu Field.

A number of participants in this years' radtour have been heavily involved in international work culminating in last year's UN Treaty on the Prohibition of Nuclear Weapons and the awarding of the Nobel Peace Prize to the International Campaign to Abolish Nuclear Weapons (ICAN). Dimity, an ICAN founder, brought the Nobel Peace Prize Medal on the radtour.

BHP took us on a bus tour of the Olympic Dam uranium mine, and that night we heard from Kokatha Traditional Owner Glen Wingfield about his experiences with BHP (and former mine owner WMC Resources) and the successful campaign to stop the Howard government building a national nuclear dump near Woomera from 1998-2004.

Then we headed north up the Borefield Road to camp at Lake Eyre and visit the Mound Springs ‒ depleted by BHP's daily extraction of 37 million litres of water from the Great Artesian Basin for the Olympic Dam mine.

The ICAN posse won the talent quest on the final night with their 'nuclear umbrella' song, closely followed by AC from FoE's Nuclear Free Collective, who made a peace crane behind her back in under two minutes ‒ a new world record.