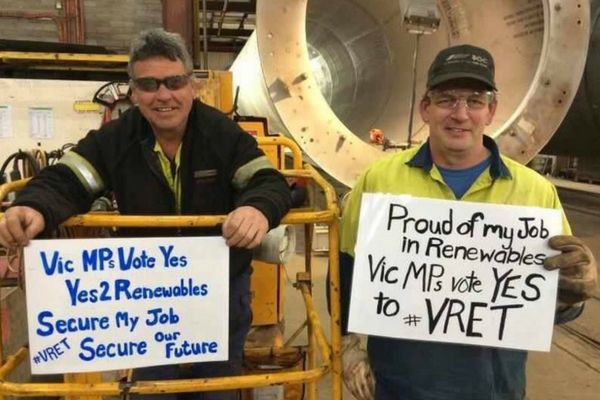 The Victorian Renewable Energy Target (VRET), now written into law as the Renewable Energy (Jobs and Investment) Bill 2017, passed the upper house in State Parliament on October 20. Elsewhere, other states such as the ACT and California have previously introduced renewable energy targets (RET) in their legislation. How does Victoria's legislation compare? Let's first look at Victoria vis a vis the ACT, and then California.

Greenhouse emissions and renewable energy targets and in the ACT

A RET was first set in the ACT's legislation through section 9 of the Climate Change and Greenhouse Gas Reduction Act 2010 ('Climate Change Act'), which provides that 'A regulation may prescribe targets for the use or generation of renewable energy in the ACT'.

The Climate Change Act promotes the development of policies and practices to address climate change and it uses a RET as a mean to achieve such policies. Yet, according to section 9, no percentage or quantity of renewable energy requirement is imposed by the Act. It is the role of the Minister for the Environment and Climate Change to determine the RET by disallowable instrument. (A disallowable instrument is a determination made by the Minister or the Secretary containing guidelines that must be taken into account in making decisions. A disallowable instrument must be notified in the Gazette and must be laid before each House of Parliament within 15 sitting days of the making of the instrument. The instrument will come into effect if: no motion of disallowance has been moved within 15 sitting days in either House, or such a motion has been withdrawn or defeated.)

Evolution of RETs determined by the Minister in the ACT:

The enactment of the very ambitious RET of 100% by 2020 required an increase in the total renewable energy production capacity permitted by Feed-In entitlements. Therefore, the Renewable Energy Legislation Amendment Act 2016 (ACT) was passed in 2016 to amend the FiT Act and increase the total capacity under Feed-In entitlement from 550MW to 650MW.

Renewable Energy Standard Targets and the Energy Commission in California

California has proven to be a world leader in renewable energy policy. It has imposed some of the most progressive renewable energy standards requiring both retail, sellers, and local publicly owned electric utilities to increase their procurement of eligible renewable energy resources. The California Energy Commission is the state's energy policy and planning agency. One of its functions is to implement the Renewable Portfolio Standard Targets (RPS), i.e. the percentage of retail sales from renewable energy to be achieved by the deadline.

California is ahead of schedule meeting it renewable energy targets. The Energy Commission estimates that about 29% of its electricity retail sales in 2016 were served by renewable energy generated from sources such as wind, solar, geothermal, biomass, and small hydroelectric.

The California State Assembly is currently discussing Senate Bill 100 which would impose a 100% target by 2045 through the 100 Percent Clean Energy Act of 2017. This means that retail sales of electricity in California would have to come entirely from eligible renewable energy resources and zero-carbon resources by December 31, 2045. The Act would also impose accelerated deadlines, to reach 50% renewables by 2026 and 60% by 2030.

It is interesting to note that Senate Bill 100 (for a future 100 Percent Clean Energy Act) contains a provision stating that the achievement of the renewable energy policy 'shall not increase carbon emissions elsewhere in the western grid and shall not allow resource shuffling' in order to preserve the spirit of Senate Bill 100.

The Renewable Energy (Jobs and Investment) Act 2017 ('the Act') is the first piece of legislation enshrining RET into law in Victoria.

The Act is a big step forward. The existence of a 2025 target highlights that the Act is underpinned by long-term objectives, which leaves the door open for discussions about future targets. As such, one of the strengths of the Act is that it specifically aims at implementing the VRET. It does not consider it merely as a means to support other policies, as is the case in the ACT. The Victorian Act provides ambitious targets which will compel the Government to implement environmentally effective policies.

The existence of provisions for accountability is another reason why we should be satisfied by the Act. Firstly, it states that 'This Act binds the Crown'. This precludes immunity for State agents and public institutions. As such, they could be held responsible under the law for not implementing the Act. Secondly, the Minister has a duty to report annually to the Parliament on progress made to meet the targets and on the performance of schemes to achieve the targets. The Minister must also determine interim levels of renewable energy. This is an effective mechanism to contribute to the achievement of the targets.

What could be improved? The high targets set out by the ACT and California's energy laws exceed the ambition of the targets in the Victorian Act. Let us hope that higher targets will be introduced in Victoria.

Besides, one can be surprised by the Act's brevity. It contains few provisions and lacks precision, merely giving general policy orientation. Much of the implementation is left to the Executive. The government intends to implement the Renewable Energy Auction Scheme. Nevertheless, the absence of legislative constraints imposed on the government as to how achieve the targets is a great concern. The Act could have been more specific in determining how these targets are to be achieved by defining the strategies the Executive must rely on. For instance, the Minister for the Environment would have the power to declare any source of energy to be a renewable source of energy for the purposes of the Act. For this reason, lower-house MP Ellen Sandell proposed during the debate an amendment to exclude burning of native forests for biomass in section 3 of the Act defining renewable energy sources.

Although a few provisions could be improved, the Victorian Act is at the forefront of RET legislation. Both in Australia and in the US, states are leading on renewable energy while national governments are going backwards. That shows how states can lead climate action, driven by communities lobbying and campaigning for changes at local and state levels.

Luiza Riottot is a volunteer with Friends of the Earth Melbourne's Yes2Renewables campaign.