A subsidiary of the Gina Rinehart owned Hancock Prospecting is encountering a number of problems in Ecuador. The subsidiary known as Hanrine Ecuadorian Exploration and Mining SA set up offices in Ecuador in 2017.

Hanrine was granted 4 mining concessions, Imba 1, Imba 2, Imba 5 and Imba 6 in late 2017 by the Ecuadorian Government. The mining concessions total several thousand hectares of land in the north of Ecuador, approximately 90km north of the capital Quito. 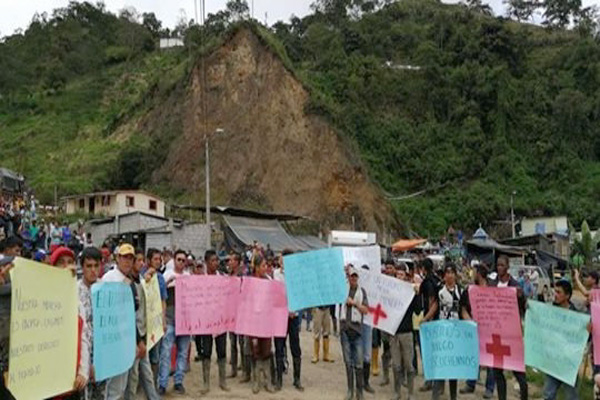 During late 2017 a gold deposit was discovered inside the Rinehart concession, apparently by road maintenance workers. Word spread quickly and almost overnight hundreds of people arrived to try their luck and mine for gold. By December 2017 thousands of people had arrived and were digging at a location called El Triunfo, located approximately 10km north west of the small village of Buenos Aires. Ecuador has a long history of small scale illegal miners and the Ecuadorian Government has long held concerns that the illegal mining pays the Government no taxes and much of the gold produced is sent overseas by organised crime. The Ecuadorian Government is also concerned about losing territory.

Throughout 2018 and into 2019 tensions have risen and the influx of miners from several countries has also brought with it influences which have created problems in the community of Buenos Aires. Several murders have occurred and prostitution and drug trafficking have also increased. Ex FARC guerillas from Colombia have also been rumoured to be involved. Illegal mining is now seen as being as lucrative as coca growing and the illegal mining issue is also a major problem in Colombia. Up to $500,000 a month worth of gold is apparently leaving the El Triunfo mine.

In early 2019 Ecuadorian media was reporting that Buenos Aires had effectively fallen under the control of the mafia, who had been extorting gold miners. In early April the Ecuadorian Military was sent into the region to sort the problem out. Removal of the miners will be next to impossible as the miners are dug in and according to media reports, the mafia is armed. The first protests by the miners against the military intervention have occurred this week. Pressure is mounting.

Hundreds of mining concessions across Ecuador were granted in 2016/17. Many of these concessions are owned by Australian companies such as Brisbane based explorer Solgold and Twiggy Forrest's Fortescue Metals Group. Copper is now being mooted at being the next iron ore. BHP has already run a series of commercials saying that the world needs more copper because of the expected demands to supply the nascent electric vehicle industry.

One of the world's largest copper finds in recent years has been discovered by Solgold, 10km north of El Triunfo at the Cascabel concession. Cascabel is currently under a bidding war between BHP and Newcrest Mining. Hundreds of illegal miners have also been recently located at a location just north of Cascabel nearer to the Colombian border. Apparently Solgold is already employing infamous security firm G4S.

The Ecuadorian Government is desperate for revenue to pay back its mounting Chinese debts. They see, opening up the country to international mining companies as one way to reduce their debt and to also claw back lost revenue through uncontrolled illegal miners. However what appears to be happening is that instead of one problem, the Government could soon have two problems. Illegal and Legal mining. The ecological footprint of the illegal miners, could be dwarfed by the creating of a number new mega-mines owned and controlled by multinational companies. Gina Rinehart's problems at El Triunfo could be seen as being a microcosm of the country as a whole.