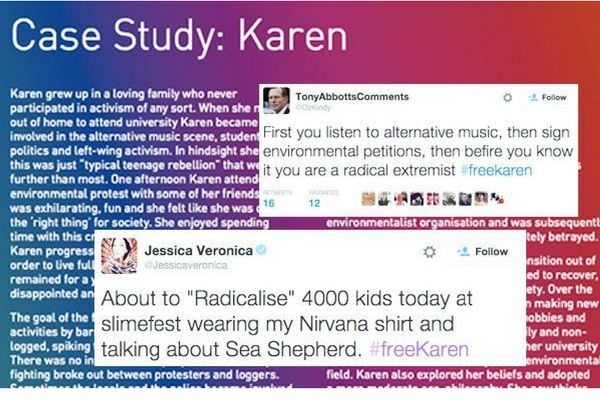 The Australian government has recently released a booklet designed for use in schools called the Radicalisation Awareness Kit.

This booklet is aimed at helping teachers identify students who are becoming radicalised and potentially linked to terrorism. Not only have there been concerns about the further marginalisation of young Muslims as a result of this resource, but also suggests that political activism can automatically lead to involvement in violent extremism. A recent example of this in the UK saw a young muslim being inappropriately targeted.

Where is there 'violent extremism' being practised by environmentalists in Australia?

It seems that the ideological desire of the Abbott government to paint environmental activists as being involved in illegal activity has flowed over into this project about terrorism. Emeritus Professor Gary Bouma, who is quoted extensively throughout the booklet, has said that the booklet was never intended to be distributed to schools. And Michele Grossman of Victoria University, whose research is acknowledged in the report, has questioned the use of the Karen profile as an example of a violent extremist, saying it “fudges and blurs some of the lines” between activism and violence.

Use of the Karen profile suggests that political activism can automatically lead to involvement in violent extremism. The experience of millions of Australians over many decades in acting for the environment shows that this is simply not the case.

Please sign our petition to the Prime Minister urging him to withdraw the booklet.