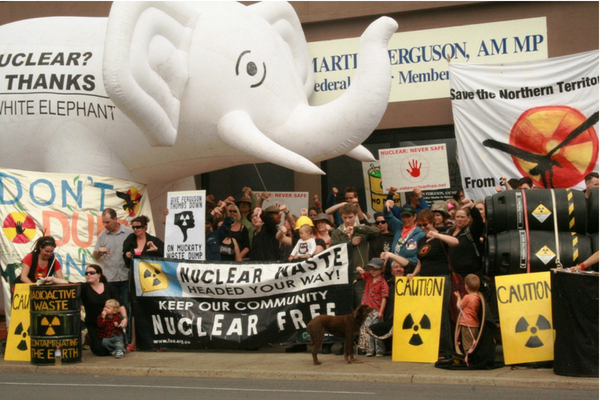 As with other commodity markets, the uranium market is a curious beast at the best of times ‒ keen to spot a bargain, investors get more and more excited the further the uranium price and company stock prices fall. They've had plenty to get excited about in recent years.

These days, the market exhibits multiple levels of weirdness, all stemming from the growing acknowledgment that nuclear power and the uranium industry face a bleak future.

The uranium market has a "subdued outlook" and Cameco's uranium is now "more valuable in the ground" according to Warwick Grigor from Far East Capital, because the cost of production is higher than the prices currently being offered. Cameco CEO Tim Gitzel agrees, saying in January 2018 that at current prices "our supply is better left in the ground." So uranium industry executives and market analysts are finally coming around to rallying cry of the anti-uranium movement: Leave it in the ground!

We've also had the odd situation over the past year of nuclear lobbyists arguing repeatedly that the nuclear power industry is in "crisis" and wondering what if anything can be salvaged from "the ashes of today's dying industry". Usually such claims come from the anti-nuclear movement ‒ sometimes more in hope that expectation.

And we've had the odd situation of industry bodies (such as the US Nuclear Energy Institute) and supporters (such as former US energy secretary Ernest Moniz) openly acknowledging the connections between nuclear power and weapons ‒ connections they have strenuously denied for decades.

Such arguments are now being used in an effort to secure preferential treatment for uranium mining companies in the US. Ur-Energy and Energy Fuels have lodged a petition with the Department of Commerce seeking a mandated requirement for US power utilities to purchase a minimum 25% of their requirements from US mines. Uranium is "the backbone of the U.S. nuclear deterrent and fuels ships and submarines in the U.S. Navy", the companies state.

The arguments might appeal to President Trump and they would dovetail neatly with his silly conspiracy theory about Hillary Clinton threatening national security by allowing the sale of a uranium mining company with US interests to Russia's Rosatom.

But the arguments don't appear to enjoy any support from the US nuclear weapons complex and they certainly don't enjoy any support from power utilities. According to market analysts FNArena, the petition lodged by Ur-Energy and Energy Fuels "brought the uranium market to a screaming halt" and US power utilities warned that a quota would force the early shutdown of some nuclear plants.

Another miserable year for the uranium industry

Nuclear power has been stagnant for the past 20 years. Although power reactors account for an overwhelming majority of uranium demand, uranium production ‒ and prices ‒ have been up and down and all over the place.

Uranium mine production increased by 50% from 2007 to 2016. The increase was driven, initially at least, by expectations of the nuclear renaissance that didn't eventuate. Mine production plus secondary sources (e.g. stockpiles and ex-military material) have consistently exceeded demand ‒ 2017 was the eleventh consecutive year of surplus according to the CEO of uranium company Bannerman Resources.

Stockpiles (inventories) have grown steadily over the past decade to reach enormous levels ‒ enough to keep the entire global reactor fleet operating for around eight years. Supply from mines and secondary sources in recent years has exceeded demand by about 18%.

Countless would-be uranium mining companies have given up, some trying their luck in other areas such as property development or growing dope. Some mines have closed, others have been put into care-and-maintenance, and others have reduced output. But supply has continued to exceed demand ‒ and to exert downward pressure on prices.

Very few mines could operate at a profit at current prices. Some mines are profitable because earlier contracts stipulated higher prices, while many mines are operating at a loss. Many companies have been loathe to close operating mines, or to put them into care-and-maintenance, even if the only other option is operating at a loss. They have been playing chicken, hoping that other companies and mines will fold first and that the resultant loss of production will drive up prices. "We have to recognise that we over-produce, and we are responsible for this fall in the price," said Areva executive Jacques Peythieu in April 2017.

Current prices would need to more than double to encourage new mines ‒ a long-term contract price of about US$70–$80 is typically cited as being required to encourage the development of new mines.

The patterns outlined above were repeated in 2017. It was another miserable year for the uranium industry. A great year for those of us living in uranium producing countries who don't want to see new mines open and who look forward to the closure of existing mines. And a great year for the nuclear power industry ‒ in the narrow sense that the plentiful availability of cheap uranium allows the industry to focus on other problems.

The patterns that have prevailed over the past five years or so might be changed by decisions taken by Cameco and Kazatomprom (Kazakhstan) in late 2017 to significantly reduce production. Canada closed McArthur River in Canada in January and plans to keep it closed for around 10 months ‒ it had been producing more uranium than any other mine in the world. Kazakhstan has been producing almost 40% of world supply in recent years and plans to reduce production by 20% from 2018‒2020.

Previous cut-backs in Canada and Kazakhstan have had little or no effect, and so far the late-2017 announcements have had no effect. But the cut-backs are significant and their impact might yet be felt.

A late-2017 report by Cantor Fitzgerald equity research argued that the decisions by Cameco and Kazatomprom could result in a "step change" for uranium prices. But Warwick Grigor from Far East Capital was downbeat about Cameco's announcement. "I don't see this as a turnaround for the uranium price; at best they will stay where they are, but it doesn't signal a boom in price," he said in November 2017.

BHP marketing vice-president Vicky Binns said in December 2017 that uranium markets would remain oversupplied for close to a decade, with downward pressure remaining on uranium prices despite Cameco's production cuts. She said that demand for uranium could outstrip supply by the late 2020s but that could change if developed nations close their nuclear reactors earlier than expected, or if renewables take a larger than expected market share.

Equally downbeat comments have been made by other industry insiders and analysts in recent years. Former Paladin Energy chief executive John Borshoff said in 2013 that the uranium industry "is definitely in crisis" and "is showing all the symptoms of a mid-term paralysis". Former World Nuclear Association executive Steve Kidd in May 2014 predicted "a long period of relatively low prices". Nick Carter from Ux Consulting said in April 2016 that he did not see a supply deficit in the market until "the late 2020s".

Perhaps a uranium price increase is on the way but it will do little to salvage Australia's uranium industry. Apart from BHP's Olympic Dam mine in SA, the only other operating uranium mine in Australia is Beverley Four Mile in SA. At Ranger in the NT, mining has ceased, stockpiles of ore are being processed, and ERA is planning a $500 million project to decommission and rehabilitate the mine site.

And with the cost of a single power reactor climbing to as much as $20 billion, proposals to introduce nuclear power to Australia seem more and more quixotic and are now largely limited to the far right ‒ in particular, Australians Conservatives' luminary Senator Cory Bernardi and the Minerals Council of Australia.

Even Dr Ziggy Switkowski ‒ who used to be nuclear power's head cheerleader in Australia and was appointed to lead the Howard government's review of nuclear power ‒ recently said that "the window for gigawatt-scale nuclear has closed". He said nuclear power is no longer cheaper than renewables and the levelised cost of electricity is rapidly diverging in favour of renewables.

Jim Green is the national nuclear campaigner with Friends of the Earth Australia and editor of the Nuclear Monitor newsletter produced by the World Information Service on Energy and the Nuclear Information & Resource Service.