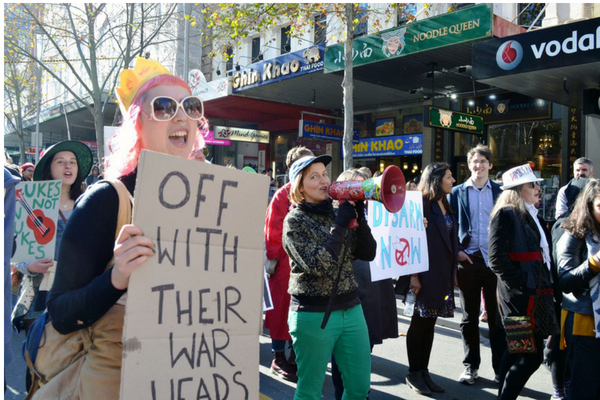 The Australian government's announcement of its goal to make Australia a top-10 arms exporter came only days after the Bulletin of the Atomic Scientists moved the Doomsday Clock to two minutes before midnight ‒ in response to the increasing global threats of nuclear weapons and climate change.

And then the Olympics were on. In South Korea. And in these times of trouble and increased military investment, what do those North Koreans, who are part of the rationale for the moving of the Doomsday Clock, do? Join South Korea as a unified team in a bid to ease tension on the peninsula, and even smile and shake hands with their leader.

And what did US Vice President Pence, who attended the games, do? According to Time: "His office said he did not interact with the North Koreans."

South Korea's President and his wife, North Korea's nominal head of state, Kim Yong Nam, and North Korean leader Kim Jong Un's younger sister Kim Yo Jong, stood as athletes from both Koreas marched together behind a blue-and-white "unification" flag for the first time since 2007.

Pence did not stand for the unified Korean team's entrance. During the parade of nations, he stood only for the U.S. team. And there you have it. The face of the most powerful nuclear-armed nation in the world and Australia's close friend, which has troops stationed all over Korea, standing up only for itself at the world's most famous sporting event. Houston ‒ we have a problem!

When Trump was inaugurated, the Bulletin of the Atomic Scientists set the Doomsday Clock at 2.5 minutes to midnight. Now they have moved it up to 2. What some would see as a sign to take stock, resolve conflicts and do what we can globally to stabilise the climate, others see as a rationale to feed the fear and increase military spending.

That's what Australia is doing. Australian universities are being designated Defence HUBs, states are scrambling to get cashed up to build their "defence" industries and there's talk of increasing US troop numbers in Darwin … plus more! Last year, Defence Industry Minister Christopher Pyne announced a "bonanza" $200 billion to upgrade Australia's naval capabilities and Australia is reportedly set to double its annual defence spending over the next 10 years. So it really does look like it's a good time to get your war on.

As a key ally of the US, Australia plays a supporting role in US-led military endeavours. Australia is increasing its military spending, in part to further enable "interoperability" with US forces. The Australian-born International Campaign to Abolish Nuclear Weapons has recently won the Nobel Peace Prize for its work to eliminate nuclear weapons. There is a real possibility that the UN will ratify a treaty to ban nuclear weapons. Who is not joining the party? The US and Australia, of course.

In the wake of another tragic school shooting, American students are calling B.S. on American gun culture. And this can't be done without questioning the role/place/meaning of the military, security and defence in US society. The right to bear arms enshrined in the Second Amendment to the US Constitution reads: "A well regulated militia, being necessary to the security of a free state, the right of the people to keep and bear arms, shall not be infringed." It's not hard to see how the nation could be sold on the notion that it takes a good guy with a gun to stop a bad guy with a gun. This is an American story: the citizen saviour, the wild, wild west and Mutually Assured Destruction all rolled up in to one … Weapons keep the peace.

But now, while some people are tinkering around the edges of reform and saying good guys can just have this kind of gun, or just this accessory, many people are actually suggesting that good guys just don't have guns. The shifting of this narrative could have huge implications for American kids – and the world. Could #OneLess gun transform to #OneLess conflict "resolved" with violence to #OneLess nuclear weapon?

Despite the Olympic handshake, the Koreas are still at war. Interestingly, the Korean Demilitarised Zone, a no-go zone between the north and the south, virtually untouched in the past 60 years, has become a safe-haven and sanctuary for many animals and plants and is now highly valued for its biodiversity.

The military, some conservationists and some environmental historians like to point out the positive impacts that militaries can have on some landscapes. Snorkeling is reported to be great at Bikini Atoll and Puckapunyal Military Training Area is a biodiversity goldmine! In the 1980s, conservationists were happy to support the military use of the Shoalwater Bay region now part of the Great Barrier Reef Marine Park, in order to stop pastoralism in the region. With the military aiming to increase activity and expand the military zone, some are questioning the military's commitment to preserving the environment, but generally they have been thought of as good stewards. None of this changes the fact that war is anathema to the environment.

Chernobyl is also touted as having abundant wildlife – but you wouldn't intentionally plan another meltdown, would you? The resilience of eco-systems aside, the ecological costs of war run deep – they are psychological, social and environmental.

The social justice implications of militarism and war and the environmental impacts of training for war impact on the everyday lives of most Australians in one way or another. Be it the current firefighting foam debacle, military culture and the commodification of nature, the military's carbon boot-print, impacts of nuclear testing and uranium mining, the increasing military-industrial presence in education systems, extractivism which furthers violent colonial agendas, the history of occupation (and resistance to occupation) around Australia, military exercises and other training activity, nuclear ship visits to Australian ports, Australian and US bases, military investment in R&D in dual-use gene and novel technologies, purchasing of US weapons systems, the Joint Striker Force, the links between war, resources, climate and refugees, jet fighters and military equipment, the military presence … our acceptance of war culture is real.

But we're at a moment where we could be turning ourselves from the brink of disaster. Tragedy is happening all around us, but the Koreas are shaking hands, nuclear weapons abolition is on the agenda, Americans are finally questioning the whole weapons thing, Australians are questioning the increasing cost of supporting the US alliance and an era of endless war.

Friends of the Earth has just launched a national project on War and the Environment. Using a social and environmental justice framework, the project will map, respond to and challenge war and the ongoing militarisation of people and places. To get involved, contact Robin Taubenfeld, [email protected], 04 1111 8737