This year on World Environment Day, Gunditjmara Whale Dreaming Custodians and Local Gunditj community of the Warrnambool area invited the general community to come together and share in ceremony and the story of Koontapool, the Southern Right Whale, in celebration of their annual return to Gunditjmara Sea Country. This was a special, profound, and unique event for the Warrnambool community.

At the event, the Southern Ocean Protection Embassy Collective launched a Citizens’ Protection Declaration [1] in response to the threats Koontapool continue to face from gas exploration and extraction. All citizens are invited to unite in protection of the Koontapool Songline and Gunditjmara Sea Country by signing on to the declaration, which is hosted at drillwatch.org.au. 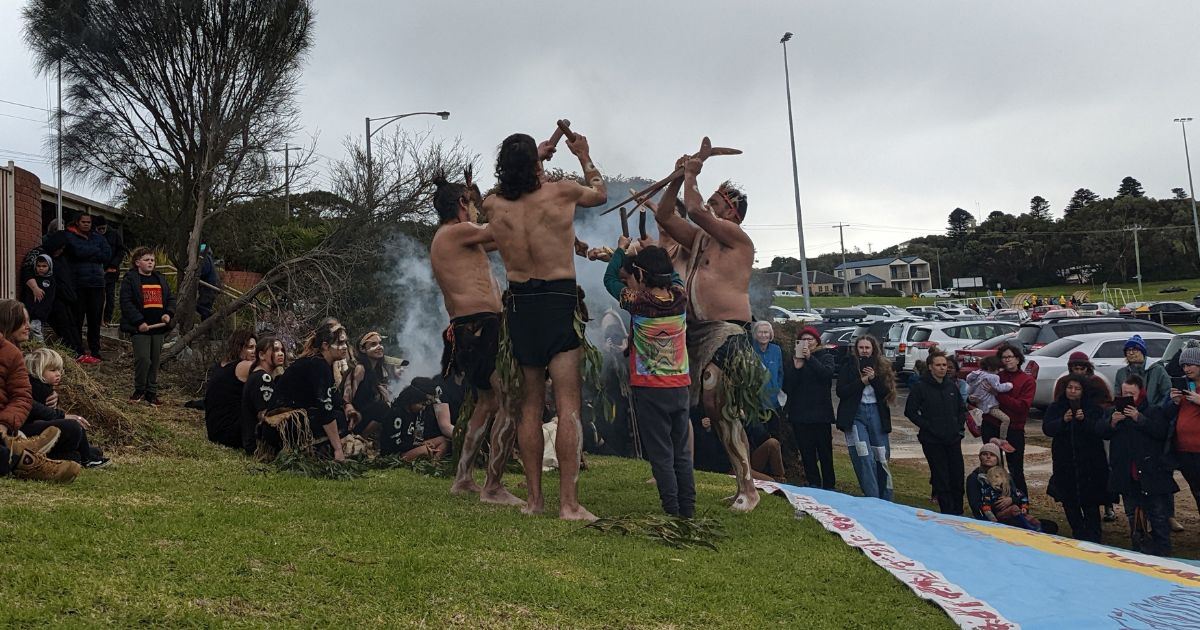 Every year Koontapool (Southern Right Whales) return to their birthing grounds along the coastlines of South West Victoria. Travelling up from the colder Southern and Antarctic waters, they use the southern coast, waters and songlines to navigate their journeys to and through Gunditjmara Sea Country to feed and birth. These families of Baleen cetaceans, sonar/song speaking navigating mammals, are Gunditjmara Ancestors.

The Southern Right Whale birthing area covers all the Sea Country east of the Hopkins River in Warrnambool, all the way along the coast to another coastal sacred site located at Johanna Beach in the southern Otways – Gadubanud Meerreeng – Country of the King Parrot Speaking People, not far east of Cape Otway.

These Koontapool Woorrkngan Yakeen – Whale Birthing Dreaming Sites, located in specific bays east of the Hopkins River, and back west along the coast – are known resting and feeding sites for the mother Southern Right Whales. Safe havens for mothers and babies. These places on Country are directly related to Gunditjmara Neeyn (midwives). Right across Gunditjmara Country we have many species that travel to our region to birth their young, this is also one reason why Gunditjmara is a Matrilineal Nation. The safe bays are also rich and important food and tool source areas for the Gunditjmara women whose creation dreaming, lore responsibilities and kinship to totem, belong to that specific part of Country.

Exploration, seismic blasting and existing gas infrastructure along the south west coastline is already impacting Sea Country, and contributing to climate change. All the while fossil gas, so-called ‘natural gas’, is still falsely promoted as a ‘green solution’ to the climate crisis by the same corporations responsible for the mess we are in. [3] For governments and mining companies to take fossil fuels like gas and repackage them as ‘green’ ignores both the immediate environmental risks of gas mining and extraction to Country as well as the irreversible damage of methane and CO2 emissions on the world around us.

We know that oceans and marine life are on the frontline of this ‘gas fired’ recovery. We want to see more people come together in support of the protection of these sacred places and critically endangered species. It is time for everyone to stand up in protection of sacred Country alongside First Nations custodians. We must build movements where First Nations ways of honouring responsibilities to Country can be supported at levels of conservation, protection and education to bring back old ways of doing, being and living in harmony with the land and waters.

“We are now living in the time of mass extinction. When I look out at the magic of the Southern Ocean, I don’t want to see gas mines lighting up the horizon. I want to see rainbows from whale breaths. Resource extractions of this volume will push the already rare Southern Right Whale and other significant cetaceans and sea life species to extinction,” says Gunditjmara woman Yaraan Couzens-Bundle, founding member of the Southern Ocean Protection Embassy Collective.

This invitation to stand united in protection, and to listen and learn from the deep and sacred knowledge held by the Whale Dreaming Custodians has touched all our hearts. Many reports from those who attended the event on World Environment Day have echoed this sentiment and the sense that our collective understanding has grown in ways beyond our anticipation.

For Gunditjmara community and holders of the Whale Dreaming it was a day to stand proud and strong in sharing the deep truth of wisdom and culture held for time immemorial, including how to protect and care for Sea Country through the holding of the Whale Songline.

For those of us who are not First Nations it was a deeply moving and profound opportunity to bear witness to ceremony, story, and song, and to absorb into our beings a growing understanding of Koorondee – behaving properly, the knowing of the way to be here in harmony with the land, Country, the ocean, Sea Country, and all the life, all the beings so deeply interconnected with this place.

Yaraan is a Gunditjmara woman. She is part of the Southern Ocean Protection Embassy Collective, led by Gunditjmara Elders and Mob in Protection of The Southern Ocean and Gunditjmara Sea Country. Jemila is the Membership & Fundraising Coordinator at Friends of the Earth Melbourne. They are a second generation English migrant living in Warrnambool on Gunditjmara country, and part of FoE’s No More Gas Collective. Liz is a member of FoE’s No More Gas Collective and convenes the Gas Free Vic Network of interested individuals, technical experts, grassroots groups and environmental and social justice organisations working towards a Gas Free Vic.