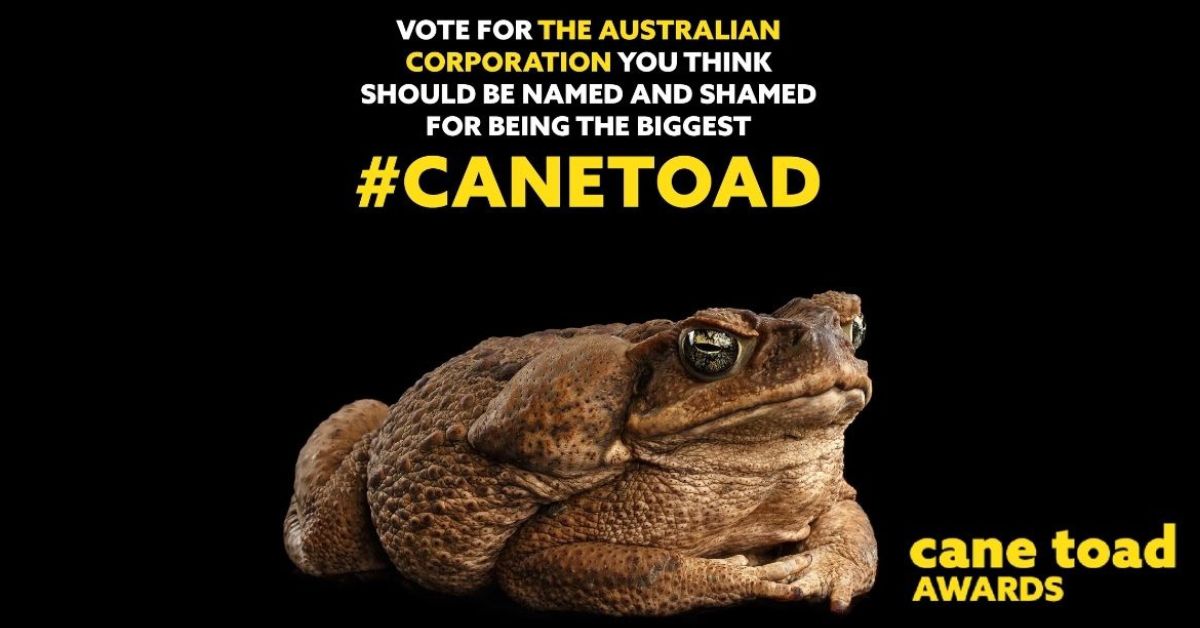 The toxic cane toad was artificially introduced into Australia in the 1930s, backed by government and powerful companies. This damaging species was brought in to protect lucrative crops from a beetle and yet it resulted in one of Australia’s worst environmental disasters with cane toads destroying ecosystems and killing countless other species.

While the cane toad continues to be a major environmental pest today, we now face a new toxic threat. Many Australian companies are implicated in the destruction of our planet and peoples’ livelihoods, at home and overseas, just like cane toads; human rights violations, rainforest clearing, land grabbing, union-busting, water contamination and the list goes on.

Despite numerous reports and lawsuits, these corporations get away with it time and time again. Corporations have too much power and have become an invasive species that must be held accountable. How is it that Rio Tinto won the award for ‘Best Corporate Social Responsibility Report’ in 2019 and then went on to blow up an Indigenous scared site? 1 Or, take ANZ, who were recognised as a leading bank globally by the Dow Jones Sustainability Index, yet were Australia’s largest financier to polluting fossil fuels. 2

It is time that these Corporate Cane Toads are exposed for their actions.

A brand-new award by Friends of the Earth Australia, Jubilee Australia and ActionAid does just this by calling on the public to vote for Australia’s most toxic company.

Over 1,000 votes were cast within the last month and the verdict is in. The inaugural Corporate Cane Toad Award has been decided.3

Rio Tinto was voted the most toxic company for its decade long failure to clean up mines in Bougainville and its recent destruction of Indigenous cultural sites in Australia despite their repeated claims that they support all internationally recognised human rights and promise to play a positive part for local communities. In May 2020, a Rio Tinto mining blast destroyed rock shelters at  Juukan Gorge -  ancient Aboriginal heritage sites that held significance dating back 46,000 years.4 The blast was carried out for the expansion of Rio Tinto’s iron ore mine in the western Pilbara region in Western Australia

Rio Tinto’s misconduct is not new.  From 1972 to 1989, Rio Tinto operated one of the world’s largest open-cut copper mines on the island of Bougainville in Papua New Guinea via its subsidiary Bougainville Copper Ltd (BCL). Throughout this time, the company discharged millions of tonnes of mine waste directly into the Jaba and Kawerong Rivers, devastating the environment and the life of local communities.5

Mayur Resources received the second most votes from the public for the Cane Toad Award for pushing to open up a new polluting coal mine in the Pacific.

This involves plans to construct PNG’s first ever coal-fired power station. It is unclear whether the company has done sufficient outreach to the people living there who could suffer substantial health impacts due to the coal plant. Recent research also suggests that the company has not adequately consulted with impacted communities about the plant that is to be built 500 meters from their village. As Peter Kesu, community leader in Butibam, put it: “The community needs to be involved in all processes of communication, in consultation and with any other activity that’s associated with the company. They don’t have our consent”.6 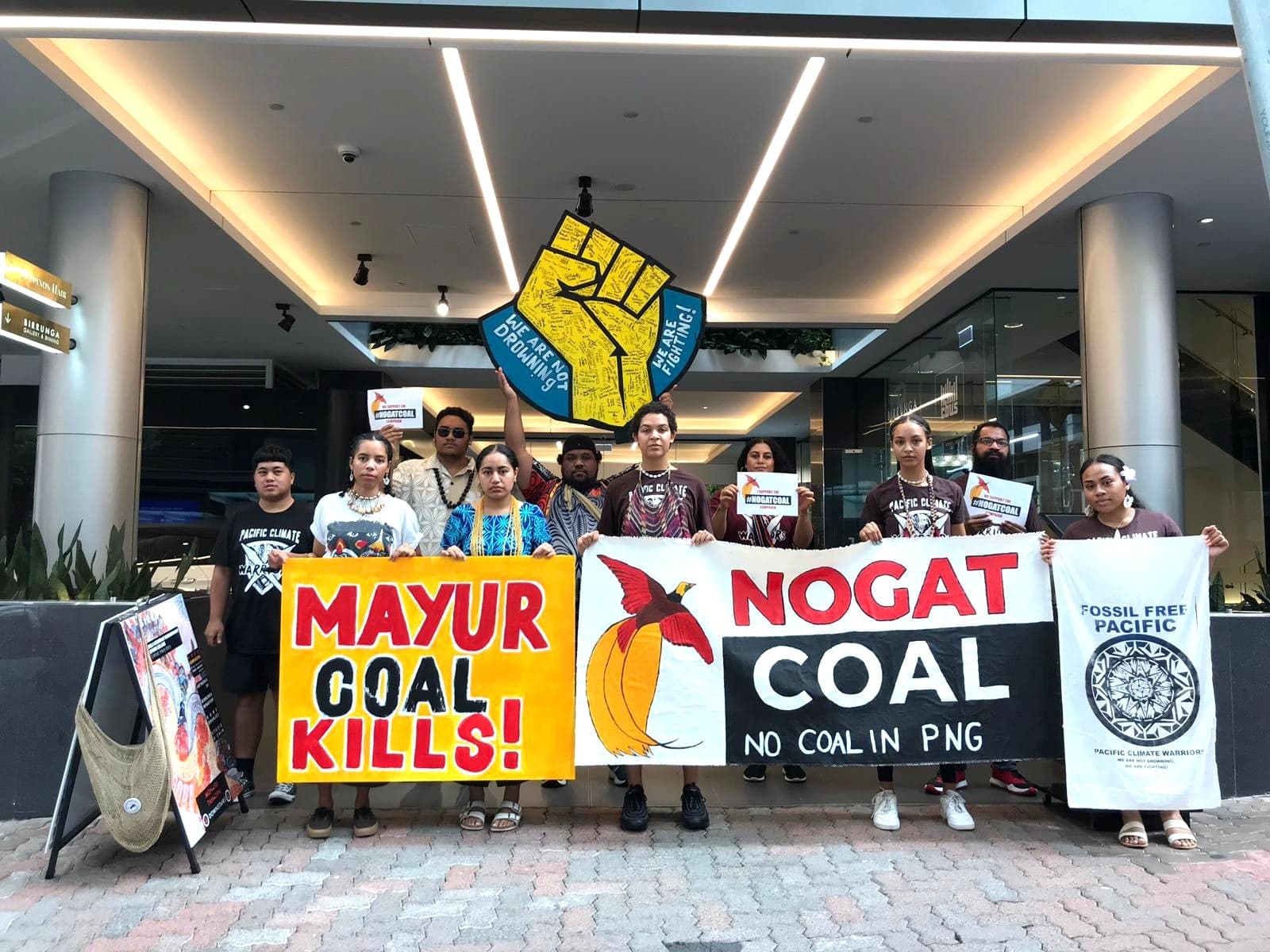 These two corporations finished ahead of some of the largest and most influential Australian companies in the world who were also nominated for the award by impacted communities and civil society organisations. These included ANZ – for financing climate-wrecking fossil fuels; BHP – for its involvement in Brazil’s worst environmental disaster; The Just Group – for their lack of support to garment workers through the COVID-19 crisis; and Resgen – for its attempt to build a coal mine in South Africa.

Now that 2021’s most toxic corporations have been decided, how can we bring these cane toads to account, especially overseas where weaker legal systems allow companies to act with impunity? An essential step would be the introduction of criminal liability and due diligence laws at a federal level to both identify and prevent violations of human rights and the environment wherever they occur.

This would mean following in the footsteps of some European countries such as France, where the ‘duty of vigilance’ law was passed in 2017 which legally obliges French corporations to identify and prevent environmental and human rights violations.7 This involves an analysis of not only the corporation’s own actions, but any potential threats throughout their supply chain, locally and globally. Pressure is now mounting on the Australian government with the Australian Human Rights Commission also calling for mandatory due diligence legislation.8 There are also important negotiations taking place at the United Nations to establish a binding treaty on Multinational enterprises with regards to human rights.9

We know who the real cane toads are, now more than ever it’s time we hold them accountable and bring them under control.

Rhys Dolby is a campaigner at Friends of the Earth Australia.

5Doherty, B., April 1, 2020, “Rio Tinto accused of violating human rights in Bougainville for not cleaning up Panguna mine”, The Guardian, foe.org.au/cr141_67

6 Quote taken from “The Coal Agenda: Mayur Resources and the Push to Start a Call Industry in PNG” publication.

9 “The UN treaty on transnational corporations and human rights”, Friends of the Earth International, foe.org.au/cr141_70