Genetically modified babies? What next?! 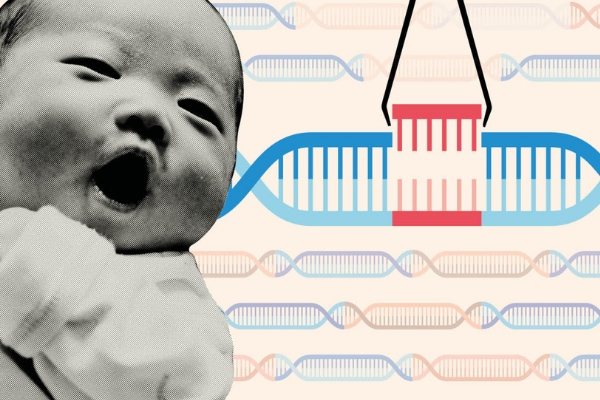 Unless you’ve been hiding under a rock for the last week (and we wouldn’t blame you), you’ve no doubt heard about He Jiankui – the rogue Chinese genetic engineer.

He claims to have produced the world’s first genetically modified (GM) babies using the new GM technique CRISPR. He’s announcement was made on the eve of the Second International Summit on Human Genome Editing in Hong Kong.

Although his claims have yet to be independently verified, scientists – with the notable exception of George Church, a gung ho US geneticist – have been quick to condemn his actions. In the wake of He’s bombshell, several scientists, including the CRISPR pioneer Feng Zhang and the stem-cell biologist Paul Knoepfler, have justifiably called for a moratorium on similar experiments.

“The organizing committee concludes that the scientific understanding and technical requirements for clinical practice remain too uncertain and the risks too great to permit clinical trials of germline editing at this time. Progress over the last three years and the discussions at the current summit, however, suggest that it is time to define a rigorous, responsible translational pathway toward such trials.”

Wrapped up in this statement is the implicit – and highly questionable – assumption that genetically modifying humans is a broadly desirable goal.

Firstly, an important distinction needs to be drawn between human germline editing and gene therapy (also referred to as somatic gene editing). Whilst gene therapy holds promise for helping people who are sick, affecting only an individual who is a fully informed and consenting patient, editing the genes of human embryos to create genetically modified people is very different.

Human germline modification raises a raft of serious safety, social, and ethical concerns. These range from the prospect of irreversible harms to the health, wellbeing and identity of children and future generations, to concerns about opening the door to new forms of social inequality, discrimination, and conflict. This is exactly why we shouldn’t be letting scientists alone write the rules on what kind of research is ethically acceptable.

Other commentators such as Kenan Malik from The Observer have cautionedagainst throwing the proverbial baby out with the bath water when it comes to human germline editing:

“Certainly, any alteration to the germline should be undertaken only with the greatest of care and with far more knowledge than we currently possess. Hence the condemnation of He. But the possibilities inherent in genome-editing techniques to help prevent and treat disorders, from cystic fibrosis to cancer, are tremendous. He’s work may be unethical, but there is nothing ethically superior in condemning future generations to terrible medical conditions if it were possible safely to eliminate them.”

But is this really the case? What are the potential benefits of human genome editing? Most of the proposed potential benefits of human germline editing involve correcting the genes for certain genetic traits regarded as defects. However, unless both parents have the same mutation on both chromosomes – the odds of which are likely to be vanishingly small – the same result can and is already being safely achieved using genetic screening.

Arguments such as Julian Savulescu’s, that there is a “moral imperative” to continue human germline editing to wipe out genetic diseases, really don’t hold up to close scrutiny.

As J. Benjamin Hurlbut and Jason Scott Robert point out in The Conversation

“in the case of embryo editing, there is not yet a child that is sick and needs to be healed. Because the genome editing molecules are delivered into the egg at the same time as the sperm, one brings the “patient” into being in the same moment as one undertakes the “therapy.” So, when the experiment is being contemplated, there is no child to heal. Thus the parents’ desires and interest are the focus.”

Human germline editing is not about solving deadly diseases – it’s about scientists wanting to do the science and entrepreneurs eager to establish new industries. Australia is now in the midst of an obesity epidemic that costs society tens of billions of dollars a year. So human germline editing, for the tiny percentage of couples who can’t produce biologically related, disease-free children themselves, is not where public research dollars should be spent.

Even if human germline research could be done completely safely, its utility would be highly questionable. However, recent research suggests that CRISPR is not as safe as some scientists claim and can result in the unexpected deletion and rearrangement of large pieces of DNA.

Some studies also suggest that ‘gene edited’ cells may be at greater risk of turning cancerous. Importantly, any unexpected mutations in genetically modified people would of course be irreversible and heritable. Given the lack of demonstrated utility of this research, is this really a risk that we as a society are prepared to take?

What this whole sorry saga illustrates is the importance of society as a whole participating in discussions and decisions about how – and even if – we use new technologies and how they should be regulated. Instead, the very individuals who seek to commercialise dangerous new GM techniques such as gene editing and gene drives are being allowed to write the rules about how and if they are regulated.