“Sorry means you don’t do it again”: Grandmothers Against Removals 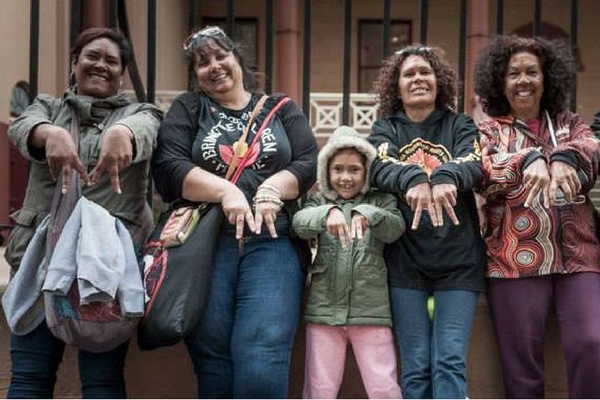 A look at the grandmothers who are fighting the system and getting their grandchildren back.

Most people don’t know that more Aboriginal children are being taken from their families today than in the ‘Stolen Generations’. We spoke with Aunt Deb Swan from Grandmothers Against Removals (GMAR).

“We always knew it was about racism. My sister, Jen had her grandkids removed. She made complaints, and was already looking after them.”

Another woman from Gunnedah, Suellyn Tighe, applied to be the legal carer of her grandkids. “Suellyn was assessed, supposedly by ‘independent people’, but her grandchildren were placed with their white grandparents who weren’t even assessed”, Aunt Deb said.

Aunt Deb believes that the kids should have been placed with Suellyn; “They had more contact with her — a stronger bond.”

“We worked out this was happening to other grandparents and parents in Gunnedah, so we joined forces.” That was the beginning of GMAR.

“Sorry means you don’t do it again” is a refrain often heard at GMAR rallies. It has been nearly a decade since Kevin Rudd’s apology, yet child removal rates have increased by 400%. “The apology was a meaningless thing,” says Aunt Deb. “A lot of people thought the Stolen Generation had finished. The apology was to the older generation but it’s a continuing Stolen Generation.”

The mechanisms of removal and relocation are coordinated by the NSW Department of Family and Community Services (FACS). Aunt Deb emphasises that FACS often removes children because of “unconscious bias”. Asked whether this bias is rooted in individuals or the organisation itself, Aunt Deb says it is both. “It’s a continuation of the APB [Aborigines Protection Board] … management wants to prove their power and control, and the caseworkers and managers prioritise [that] power and control over what’s best for the kids”.

“What they should be doing”, says Aunt Deb, “is following the Bringing Them Home Report”.

The Bringing Them Home Report (BTHR) was commissioned by then-Attorney-General Michael Lavarch, after years of pressure from Aboriginal organisations. It examined the trauma inflicted upon Aboriginal and Torres Strait Islander people through forced removals. The report, which was largely in response to the Stolen Generation, made recommendations to address the continued practice of removals and informed Rudd’s decision to issue an apology.

The report was released 20 years ago. Aunt Deb says government agencies have done nothing since. “The only recommendation that was implemented was the ‘Aboriginal Placement Principle’, and yet they don’t do it!” Aunt Deb says. The Placement Principle states that, if Aboriginal children are to be removed, they should be placed within their family, extended family, language group or broader Aboriginal community in that order. Only if none of those options are available should children be relocated to a white family. She refers back to Suellyn’s case. “Aboriginal relatives weren’t even considered, despite the Placement Principle.”

Aunt Deb asserts that “when FACS are assessing Aboriginal families, they never look for strengths”. According to Aunt Deb, “FACS gives excuses” for their ineptitude such as being “overworked’”. She points out that “they would have less work if they didn’t take our kids!”

She recounts how some children have been taken away due to “reports about stupid things like playing in the front yard with no shoes on”. Innocuous things can add up to a justification for removing kids.

Aunt Deb also recounts instances of blackmail from solicitors: “if you don’t sign the papers they won’t give contact to the grandparents or the families.”

A significant issue is that FACS’ policies allows for “interpretation of the best interests of the child”. Rather than clearly setting out what children’s’ best interests are, FACS allows individual caseworkers to ‘tick the box’ without having to adhere to a strict policy. Aunt Deb reminds us that “the Bringing Them Home Report states the best interests for the child are to be with their family.”

Raymond “Bubbly” Weatherall, a Gamilaraay Maari (man) and Birriwaa (warrior) from Collarenebri, supports the work of GMAR. He and Aunt Deb acknowledge that “there are still issues” and agree that kids in immediate danger should be removed and placed with other family members, but tell us that the number and conduct of removals indicates there is a problem with the current system.

One way of understanding the scale of the issue is through its financial cost. Child removals are exceptionally expensive. According to the Australian Institute of Family Studies, $3.6 billion was spent on ‘child protection and out-of-home care services’ in 2014-15.

“Most kids are removed without early intervention.”

The “government should be refocusing the funds”, Aunt Deb says. She argues that the government could use its money more efficiently by offering preventative care to families.  According to Deb, that would make “the family unit stronger so the kids can stay at home”.

Indeed, the Human Rights Commission notes that similar problems existed during the Stolen Generation. “Many people have said that Indigenous children were removed from appalling living conditions. However, nothing was being done by government agencies to improve these conditions for Indigenous families.”

Underpinning the issue of forced removals is intergenerational trauma. As Bubbly points out, “Aboriginal families have been broken up so much.” The BTHR notes that “The laws, policies and practices which separated Indigenous children from their families have contributed directly to the alienation of Indigenous societies today.” There is a cruel irony in the fact that the circumstances from which FACS removes children were often created by the past removal of Aboriginal kids. With the continued removal of Aboriginal children, the cycle of intergenerational trauma is likely to continue.

A complicating factor in child removals is that, according to Aunt Deb, FACS workers “don’t understand how Aboriginal families work”.

“Their cultural plan is to give [removed children] books”, said Aunt Deb, which she sees as inadequate and wilfully ignorant. “The cultural plan should always be that you return them to family. They need to be living [culture] with their family – that’s how they learn. Taking them away from their family and culture is the most traumatic thing.”

Aunt Deb says that FACS workers have told her that “no program could give us what we’ve [GMAR] told them.”

In light of this, Aunt Deb emphasises the need for FACS to listen to Aboriginal families and communities in order to do what’s best for the kids. She points to FACS workers not “mixing with and seeing Aboriginal people in their own personal life” resulting in a bias against Aboriginal families drawn from popular media and opinion.

But Aunt Deb says GMAR will not accept “reduced by 2020”, a date drawn from a Department of Social Services publication titled “National Framework for Protecting Australia’s Children 2009-2020”. “We want the kids back with their families immediately, not setting dates”.

Aunt Deb has called for the whole system to be overhauled with a focus on greater accountability. “How long do these kids have to wait to get back with their families? These kids are still being traumatised every day they’re away from their families.”

The BTHR was released twenty years ago. “I’ll probably be dead in 20 years, the kids will be over 18, if they do another research report, and you keep telling us to go through a process”.

“Sue’s grandkids are now placed with her. They came back just before Christmas.” Nonetheless, Aunt Deb says that Sue will still have to “apply [for] guardianship and get them out of [FACS’] hands.”

There are some indications of progress, however. Aunt Deb recounts one long term Aboriginal activist saying that GMAR was the “quickest movement to produce change” that he had seen. Some of that change is coming through work that GMAR is doing with FACS on new guiding principles on caring for Aboriginal children. “We’re working on that with them now (…) Implementing has already started. [We’re] starting local Aboriginal advisory groups – going around getting people to start their own local groups. Then going to focus on [how to] getting the kids back, so it’s a shorter and more appropriate process once they’ve found suitable relatives to get them to.” Aunt Deb and GMAR’s demands echo the BTHR’s principal finding “that self-determination for Indigenous peoples provides the key to… eliminating unjustified removals of Indigenous children”.

When asked what students can do to support GMAR, Aunt Deb said, “Turn up to rallies and support us that way, that’d be really good.”

Becoming aware, listening to Aboriginal people and believing them is the first step to addressing the issue. Otherwise, Aboriginal people will keep facing the reality that  A.B. Original describe  in “Jan 26”: “I turn the other cheek, I get a knife in my back / And I tell ‘em it hurts, they say I overreact”.