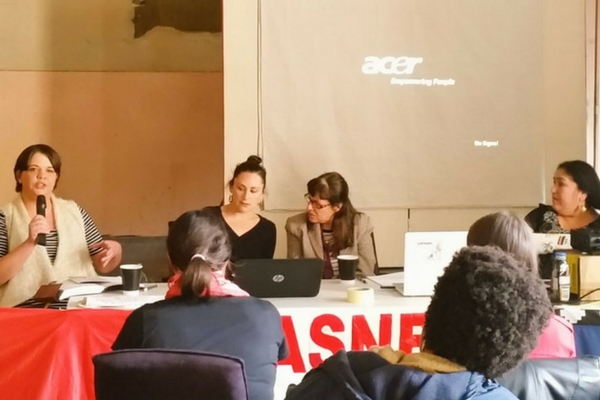 The destructive paths of neo-liberal capitalism have forged their way through Latin America for decades, and an all-too-familiar path is being carved through the land and cultures of the First Peoples of so-called Australia. The following is a summary of a panel discussion at the 2017 Indigenous and Grassroots Movements Solidarity Gathering which was held on October 7/8 at Trades Hall in Narrm (Melbourne) on unceded Wurundjeri country, Kulin Nation.

Our purpose was to come together to share and learn from each other, from different communities, cultures, and groups, in a crosscontinental expression of global solidarity against the corporate machine and for a better world!

Warriors of the Aboriginal Resistance

The gathering opened with an Acknowledgement of Country from Kristy-Lee Horswood (Gamilarray) of the Warriors of the Aboriginal Resistance (WAR). Collectively recognising the history and sovereignty of the original peoples of the land we gathered on, the Wurundjeri people of the Kulin Nation, the first panel was opened: “This is our time” – First Nations Struggles – culture, land and cosmovisions: Denouncing repression, militarisation and extractivist neoliberal policies.

Kristy-Lee was the first speaker of the panel and began by introducing herself and where she comes from as a proud Gamilarray woman, a survivor of the Stolen Generations and as an organiser and member of WAR and the Brisbane Aboriginal Sovereign Embassy (BASE). The principles that underpin the political work of WAR, Kristy-Lee explained, are resistance, revival and  ecolonisation. Decolonisation is a framework and principle that impacts all aspects of struggle and life. The importance of language
revival was emphasised, those gathered were taught the Gamilarray greeting “Yaama”, and of the Anaiwan Language Revival Program reviving the language of the Anaiwan people of so-called Armidale and the New England tablelands in New South Wales.

Kristy-Lee recounted recent research she has done into massacres of the Gunnai/Gunditjimara people and also of the recent police
brutality against young Aboriginal activists in Mpartwe (Alice Springs) as part of the Shut Youth Prisons protests. She noted the similarities between historic and modern forms of state violence used against Aboriginal people. Kristy-Lee also spoke about the importance of the Mapuche Aboriginal Struggles for Indigenous Land (MASIL) exchange organised together with Latin American Solidarity Network (LASNET) and held in February/March 2017 in Mapuche land, Chile. The power of learning as an Indigenous
political activist, about the different histories of colonisation and Indigenous struggle across international contexts and of the similarities in values and worldviews was discussed as a very powerful part of struggle. So too the histories of Latin America, North America and Turtle Island (Canada) with over 500+ years of colonisation and resistance were discussed in comparison with local history of Aboriginal peoples, who are the oldest surviving people of the earth but with just over 220 years of resistance, are younger in the process of struggle.

Kristy-Lee discussed the struggles of her Gamilarray community against fracking and coal seam gas extraction on their country by Whitehaven mining and other companies. She spoke about the most recent death in custody of Tane Chatfield and how Aboriginal people organise whilst being in a continuous state of grief, that there can be no “Reconciliation” without conciliation or a real acknowledgement of the history of this country.

Mapuche struggle
Catalina Catrileo was an international guest on the panel, a Mapuche activist and the sister of Matias Catrileo, 22 year old Mapuche activist killed by Chilean police in 2008. Catalina began by explaining to the gathering the history of Mapuche people who before invasion of the Spanish over 500 years ago, had territorial and political independence. Following the Spanish was the Chilean state and Catalina noted the similarities with Aboriginal experience of the genocide and massacres waged against the Mapuche people. Another similarity being that in Chilean schools, Mapuche children were forced to learn Spanish and forbidden to speak Mapudungun (Mapuche language) or practise their spirituality.

Catalina stated that now her people, as echoed by many speakers over the two days, have entered into a new modern form of colonisation by multinational companies. Moreover, that when legal rights are granted to land, this does not include the waterways, or underground water and so the Chilean state has legal rights to exploit the lands, as also is the case with fracking on Aboriginal land and many Indigenous communities. Catalina also emphasised the importance of protecting Indigenous languages, as language contains our relations with our ancestors she said, and our spirituality.

Catalina discussed how forestry companies and other multinational companies abuse and destroy the land and water systems as well as historic and sacred sites including cemeteries. Autonomy and self-determination, which we as Mapuche have always had, she said, was attacked by the Spanish crown, the Chilean government and now the new invasion of multinationals into our territory, families and our future.

The current situation, Catalina explained, is that of militarisation and repression from the Chilean state against Mapuche leaders and communities. The use of the anti-terrorist law (now named the Interior State Law) which remains from the Pinochet dictatorship has been a major tool of the Chilean state to criminalise and incarcerate Mapuche leaders with impunity, allowing for faceless testimonies and “preventive detention” which means that someone can be detained on suspicion of having commit a crime before any evidence is even provided.

This archaic and nefarious law, which has been condemned by many human rights organisations, and the United Nations, is used exclusively against Mapuche people, especially targeting community leaders including Machis (spiritual leaders) who are in the process of moving back into their land and asserting their right to self-determination and autonomy. There were recent hunger strikes of Mapuche political prisoners and Mapuche people in the cities of Temuco, Conception and Santiago organised huge demonstrations in solidarity with the prisoners and to demand their release.

As a result of these mass mobilisations, the state has reacted with increasing counter-intelligence and surveillance of Mapuche communities. The repression and oppression is increasing, Catalina noted, because the movements are getting stronger and gaining more solidarity from both Mapuche and Chilean society. Moreover, Mapuche communities, rather than being deterred by these increasing attacks are becoming stronger and more determined to continue in the struggle.

Mapuche people will never give up the struggle for their land and freedom, Catalina explained, because as the Mapuche traditional cry translates – Marrichiweu! – for each one who falls in the struggle, another ten will rise!

Marisol Salinas, a proud Mapuche woman and fighter living in so-called Australia, LASNET organiser and co-ordinator of the Mapuche- Aboriginal Struggles for Indigenous Land (MASIL) exchange, was the final speaker of the opening panel. Marisol spoke too about the Mapuche political prisoners and the current situation of violent repression against the Mapuche people.

Marisol discussed the effects of eucalyptus and pine plantations in Mapuche land, draining the underground water table and contaminating and eroding the soil, undermining the natural cycles of life. There is ongoing research into the links also, between the Chilean forestry industry and Australian companies that profit from this destruction of Mapuche land. Hydroelectric companies were also mentioned, as having another powerful effect on the land, changing the course of the rivers and destroying the
neighbouring ecosystems, as well as building dams on top of Mapuche cemeteries as in the case of the Pewenche people.

Marisol then went on to discuss the struggle of the worker-controlled ceramics factory in Neuquen, Argentina called Zanon or Fasinpat (Fabrica Sin Patrones) – which translates as ‘Factory Without Bosses’. Marisol talked about this example of Fasinpat with emphasis on the solidarity and links between the struggles of poor people and workers and Mapuche people in the context of Argentina. There are many Mapuche workers at Fasinpat and the factory itself has also built strong alliances with local Mapuche communities, who gave in solidarity during the beginning of the worker’s occupation of the factory, some clay from their land to the factory to begin to produce the tiles and the factory in term has supported and acted in solidarity with the Mapuche struggle in an ongoing and permanent commitment way, from Mapuche tiles that they produce to their constant presence and promotion of Mapuche campaigns.

Marisol discussed the example of Fasinpat as one we could learn from in terms of Indigenous peoples and poor people, workers and grassroots movements working together in solidarity to support each other, not just in words but in practise.

Marisol discussed the importance of providing and making spaces for Indigenous peoples to meet and connect and develop their relationships. This is one of the main aims of the Mapuche Aboriginal Struggles for Indigenous Land (MASIL) exchange, which Marisol is a coordinator of, and which focuses on building relationships and solidarity between Indigenous people in struggle for self-determination and in defence of the Earth.

The ethics and values of non-indigenous solidarity was also discussed and the importance of respecting autonomy of communities in struggle, respecting self-determination and supporting Indigenous people’s right to make their own decisions, and making clear that Indigenous people do not need to be represented by non-Indigenous people, something that Marisol believed was inherent in the work of LASNET, and why she felt that work was so important – in building bridges of solidarity and communication between the struggles of Indigenous people, workers, peasants, women and all people struggling for dignity, freedom and in defence of the Mother Earth all across Latin America, the Asia Pacific and the globe.

For more information about the conference or the Latin American Solidarity Network, visit their Facebook page or email [email protected]