Our Melbourne Food Co-op and Cafe 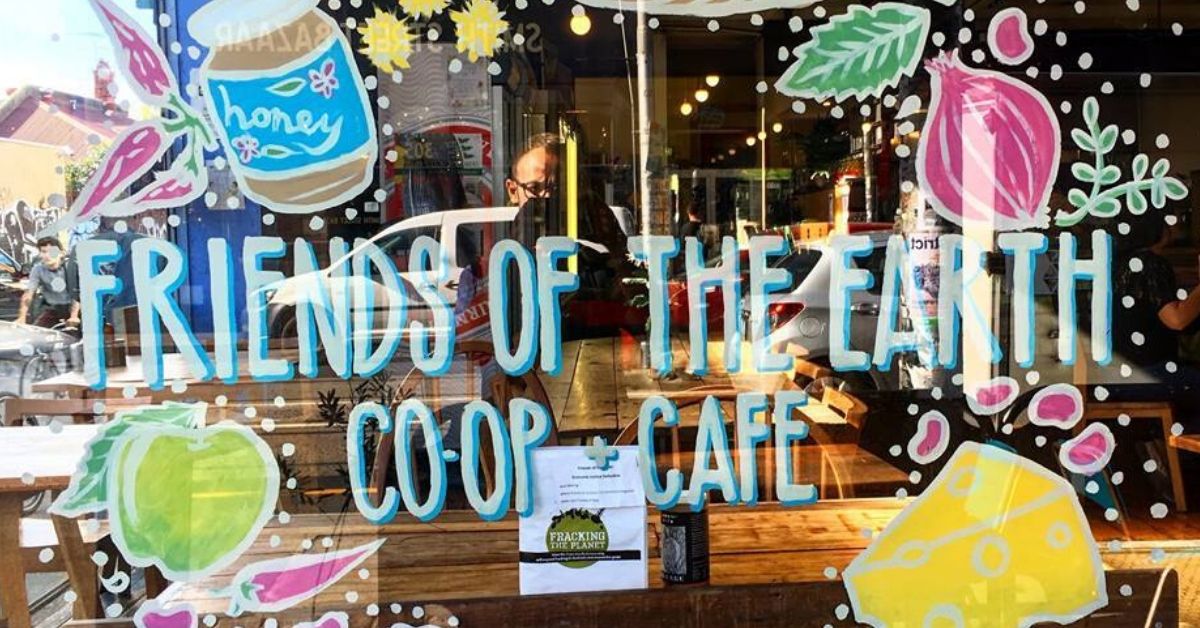 Established in 1975, Friends of the Earth Melbourne's Food Co-op and Café addresses sustainability at a fundamental level − fulfilling our basic needs in a way that's healthy, fair and affordable for people and the environment. The Co-op is an ethical trader that provides food, fruit and vegetables, health and eco-cleaning products.

The emphasis is on providing natural, organic and biodynamic produce that is grown and prepared as locally as possible − preferably by small companies and producers. It is also a community hub that has been bringing people together to collaborate and campaign on environmental and social justice issues for 40 years.

'Reduce, reuse and recycle' is the foundation of our work. We encourage people to bring their own containers. In this way it is possible for people to stop creating large amounts of daily waste in their homes. The Co-op started the 'Say No to Plastic Bags' campaign in 1989. This is an example of how we have led the way for others to come on board with significant sustainability initiatives.

We have also done this in the field of organics and local produce which are now widely recognised as important to reduce use of chemicals, pesticides, fertilisers, fossil fuels, industrial pollutants and greenhouse gas emissions.

More recently, in 2010, we began to transition to a palm oil free zone in response to the large amounts of deforestation and displacement of communities globally caused by palm oil plantations. We were able to work with some of our suppliers − such as Rambilldeene Farm Soaps − to encourage them to go palm oil free. In this way we could continue to stock a local product from a small producer and also spread the word about palm oil.

We were excited to see the work of the Co-op recognised by the City of Yarra when we received their Sustainable Business 2014 award.

As one of the first food co-operatives in Melbourne, Friends of the Earth has served as a model for others to replicate. Starting out as a 'dry foods' co-op in 1975 in Carlton, it is now one of the largest and longest running co-ops of this type.

The Co-op has changed and evolved a lot from those early days and at one point there were two separate co-ops − one for dry foods and the other for fruit and vegetables, housed in different buildings. This second co-op came out of the Food Justice Centre and aimed not only to provide organic fruit and vegetables at reasonable prices, but to improve the network between growers, distributors and consumers.

The Food Justice Centre began in the early 1980s as a response to the patenting of seeds that began to pose a risk to subsistence farmers globally, the use of harmful chemicals in agriculture, and the corporatisation of food production. They produced materials about the methods of food production and their impact on the environment and health.

Looking back at early Chain Reaction articles it's interesting to see the mix of ideas and issues that are explored. Articles on food often referred to the catchphrase "you are what you eat" and reflected an awareness that was emerging at the time – with people starting to respond to the industrialisation of food production and 'convenience culture' with a concern for the health, environmental and social impacts of these practices. This went hand in hand with an interest in the organic and biodynamic farms that were starting to emerge. Articles explored ideas around healthy eating and offered critiques of 'convenience foods'; debated the health aspects of margarine versus butter; and featured spreads of vegetarian recipes alongside such titles as 'Food: a vehicle for repression, a rallying point for justice!'

For 15 years we raised awareness of Friends of the Earth by catering at festivals and private events. This showcased our food skills and knowledge and creativity. We held themed balls that fundraised to keep us operating and to grow amid hard times. These fun events brought our community together to celebrate and build stronger connections. With regular Perry Street festivals we bring together many local enterprises to demonstrate positive alternatives for the use of community space and to showcase our business. Ties are strengthened between community groups, local artists and campaigns.

Being a business as well as a campaign allows the Food Co-op to subsidise the rent of the building, making it affordable for the other FoE Melbourne campaigns to rent a desk space in the offices upstairs. Through this relationship we promote, support and disseminate information about local, national and international social and environmental issues.

The FoE Café − co-located with the Co-op at 312 Smith St − started around 15 years ago and has grown from a tiny operation to a busy lunchtime that serves a vegetarian lunch plate every day to between 60−100 people.

Café cook Esala Liyanage first heard about the Co-op when he was involved with student activism in the Tarkine forest in Tasmania and decided to move to Melbourne. He started volunteering in 2005 and cooking in 2007. "I really like food co-ops as a political concept so I got involved with FoE," Esala said. "Its good because it's so inclusive of everyone in the community."

Beth Cameron said: "The Co-op and Café are about running an ethical business with environmental and food issues being the priority. Part of our education is through the volunteer program. We have had thousands of volunteers come through with different skills and identities from all over the world. It is an essential and enriching part of the organisation."

We have partnered with North Yarra Community Health on the Café Meals Program through which we provide healthy food on a daily basis to disadvantaged folk from the local community. We partnered with the Fitzroy Primary School to compost our food waste as a part of their kitchen garden program. We work with many social programs such as the Judy Lazarus Transition Centre that supports people coming out of jail to re-engage and retrain in preparation to enter the community and workforce. The Co-op provides a non-judgemental and supportive space for them to develop new skills and restore self-confidence.

We've worked with NMIT students from non-English speaking backgrounds to build language skills and confidence and we regularly host work experience students from local high schools. In April 2014 we collaborated with local community radio station 3CR for a week-long Sustainable Breakfast radio program. 3CR broadcast live from the Café and we provided free organic meals (you can listen to the series here).

Co-op coordinator Karri Cameron said: "What's good about the Co-op is that it's always tried to stay contemporary. Just being on Smith St for that amount of time, we've been able to adapt and change but still keep our original values. That's a really good thing about the co-op, it's flexible, it changes, but always keeps its underlying values intact and also it's relationship to Friends of the Earth as a whole organisation."

This FoE Food Co-op is seeking to document its history − if you would like to share any reflections of your experiences with us, please email [email protected]

From Chain Reaction #123, April 2015, national magazine of Friends of the Earth, Australia