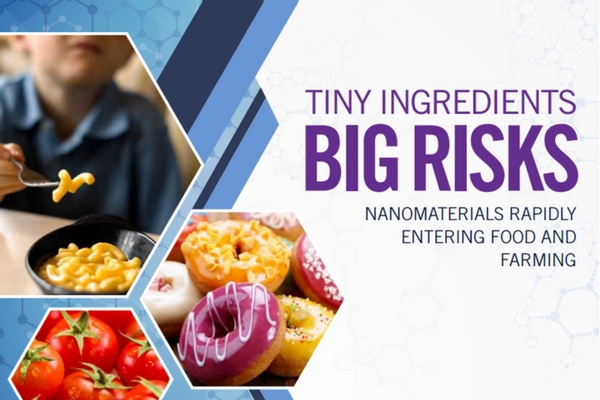 Friends of the Earth has renewed its calls for a recall of food products containing nanomaterials following the release of a new studyi which found that titanium dioxide (TiO2) in food is absorbed into the human bloodstream. The calls follow the release of independent testing results last week which found potentially harmful nanoparticles of titanium TiO2 and silica (SiO2) in a range of food products including M&Ms, Nestlé Coffee Mate Creamer, Old El Paso Taco Mix and Woolworths Homebrand White Sauce.

The study’s authors have suggested that nanoparticles of TiO2 may be more likely to cross the intestinal wall than larger particles and have called for further work to quantify human exposure to TiO2.

Jeremy Tager from Friends of the Earth’s Emerging Tech Project said “for over two years, our food regulator Food Standards Australia New Zealand (FSANZ) has insisted that foods containing nanoparticles are not sold here on the basis that no companies have applied for approval. Now that we’ve proven nanoparticles are being used in food FSANZ is simply claiming they are safe despite there being no evidence to support this statement.”

“FSANZ is also refusing to now require applications for approval despite having promised pre-market safety testing and an approval process for novel foods such as these.”

“We now know that TiO2 can get into our bloodstream but we don’t even know where it goes. We can, however, infer the potential harm based on animal studies, which have clearly shown that TiO2 nanoparticles can migrate through systemic circulation to different organs, accumulate there, and cause serious damage. Nano TiO2 is highly mobile in the body and has been detected in the blood, liver, spleen, kidney, lung, heart, and brain of animals and has been found to cause oxidative stress, inflammatory reactions, DNA damage, and cell death.”ii

“People consume literally trillionsiii of food additive particles a day. Children between the age of 2 and 4 have been foundiv v to have the highest exposure levels of TiO2because of its use in lollies.”

“The fact that FSANZ has the gall to say that nano TiO2 is safe when there are so few studies looking at human exposure to TiO2 and its impacts highlights how deeply captured our regulator actually is.”

“The European Chemicals Agency, ECHA, is currently reviewing the safety of TiO2 - including the nano form - because of concerns it may be harmful to the environment and human health.”vi

“Friends of the Earth Australia is calling for recall of all food products containing nanomaterials and an immediate moratorium on the use of nanomaterials in food, pending full safety assessments,” concluded Mr Tager.