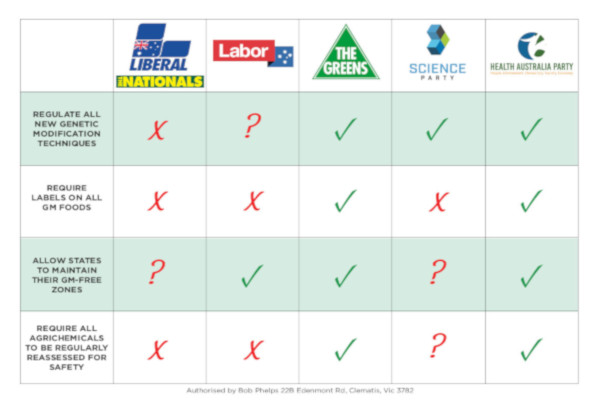 Responses to an election questionnaire circulated by Gene Ethics show major policy differences between political parties on how new methods of genetic modification (GM) such as CRISPR should be regulated.

The Australian Greens, Science Party and Health Australia Party all agree genetically modified organisms produced using methods such as CRISPR should be assessed for safety before release into our environment and food chain.

Yet the Coalition Government quietly announced the deregulation of several new GM techniques the day before the Federal election was called. These regulatory changes will allow a raft of new GM animals, plants and microbes to enter our environment and food chain with no safety assessment and likely no labelling. These include super-muscled pigs, cows and goats, and non-browning mushrooms.”

Unfortunately, the ALP failed to complete the questionnaire – leaving voters very much in the dark as to whether a Labor Government would disallow these changes.

Recent research shows the deregulated techniques pose new risks that must be assessed. Another recent peer-reviewed study concludes that assuming these GM techniques are safe “lacks a robust scientific basis”.

We are deeply concerned that the two major parties have abandoned a scientific approach to GM regulation. Instead they appear to be bowing to pressure from the GM crop industry which seeks to avoid all regulation – including labelling.

Read the responses to the election questionnaire: