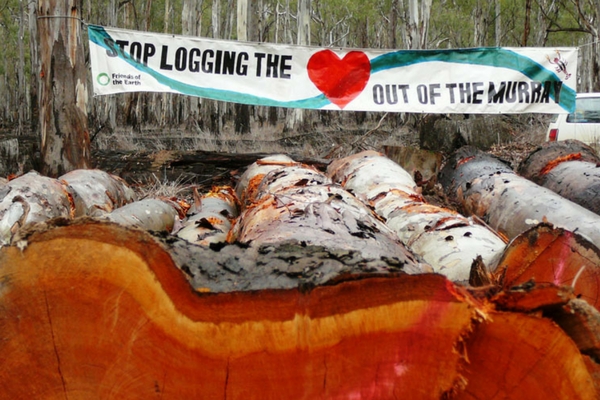 The outcome brought NSW into line with Victoria, where protection for the majority of its red gums was announced in 2008. 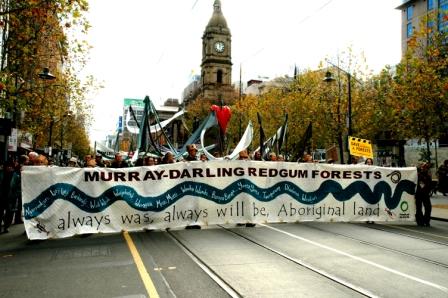 The move also recognised the crucial role Indigenous people have to play in conserving Australia's unique natural and cultural heritage. Following Victoria's lead, the NSW government took steps to negotiate joint management of the Millewa forest with the Yorta Yorta people. And taking a step further it handed back the Taroo and Werai forests to be managed as Indigenous Protected Areas (IPA) − an arrangement whereby the Commonwealth gives Traditional Owners funding to manage their land for conservation.

IPAs are currently under threat by the Federal Government who are stripping funding for the Caring for Country and IPA programs. IPAs have NO secure funding after 2018.

Friends of the Earth stand in solidarity with Indigenous communities who are living on country and managing country and call on the Government to allocate long-term adequate funding to the IPA, Indigenous Ranger and Caring for Country programs.

‘Country Needs People’ has been campaigning to encourage the federal Government to:

At the time, Yorta Yorta Elder Neville Atkinson spoke about the outcome, Friends of the Earth found him pleased but "this doesn't mean we take the foot off the pedal." Neville also had a stern warning for the state government: "They have to support this, support our nation to make the deeper social changes that need to happen. If they don't see the full picture Yorta Yorta are not interested. It's a wasted opportunity."

Uncle Neville was talking about tackling the underlying socio-economic issues that keep the local community divided – and his people usually at the bottom: "We don't want to perpetrate on anyone else the disadvantage that was imposed on us – we want to make this a socio-economic opportunity for all. There's no perception that Yorta Yorta can offer something. We can be seen in a different light - not a fringe dweller and welfare recipient – but rather we can bring value to the region."

A similar reaction came from Deniliquin Indigenous woman Jeanette Crew about the precedent-setting decision to establish Werai Forest as an IPA. "What's happening is a whole new thing in terms of social justice and long-term capacity building for the community. For a range of reasons our people are still not getting the jobs. This process will go a very long way to addressing a lot of those issues. There's going to be so much work needed to bring the country back to health, and it's not just short-term jobs, this is lifetime work, it's inter-generational."

But properly funded, IPAs could really be worth it. Not just protecting country, but the benefits it brings to the community.

Jeanette said: "Once we've done the work assessing what needs to be done in terms of the management and protection of that area ... there are opportunities for kids who aren't even born yet to have a career in any of the sciences we need, biologists, botanists and all that sort of the stuff."

Because the land is to be handed back, it brings long-term benefits that have been missing from previous community development initiatives Jeanette has been involved in: "A lot of the other stuff we've done is short-term, the funding has a finite lifetime. Three years the longest project we've ever had. This is different − it's inter-generational. It's a lifetime change."

At Werai, the Traditional Owners have achieved something few believed possible. The 12,000 ha state forest handed back as freehold, for management as an Indigenous Protected Area. Friends of the Earth spoke with Jeanette Crew about how this unfolded back in 2010. "In the lead up, people thought it was pie in the sky, but if you don't raise the issue it doesn't get addressed."

Too true. In March 2008 Friends of the Earth's Barmah-Millewa collective (now River Country campaign) campaigners met in Deniliquin when red gum conservationists began a comprehensive engagement program with Traditional Owners across the Riverina. The aim was to negotiate land management proposals that would deliver environmental and Indigenous outcomes. All parties were keen to explore any option that would protect ecosystems and secure Traditional Owner rights to country, and believed jointly managed national parks to be the most politically feasible and legally secure option available.

Many groups agreed with us. From the outset, however, the Wamba Wamba pushed in another direction. Whilst supportive of  conservation goals, experience had made them skeptical of partnering with the state conservation agency and not afraid to explore alternative options.

Friends of the Earth had always eyed the Indigenous Protected Area program with a wistful 'if only' attitude. A great program for Traditional Owners who have already had their land returned, we didn't feel it showed much promise for State Forest where vested logging interests were lined up against any conservation move, let alone Indigenous land justice.

The Wamba Wamba were happy to talk to Friends of the Earth, but they wanted a lot of questions answered that we weren't in a position to do. They commissioned an options paper from the Environment Defenders Office examining alternative management arrangements for Werai Forest. Shortly after, they began dialogue with Forests NSW about the IPA program. In 2009 they jointly began an IPA-funded project to look at joint management options for the northern part of Werai – an area of limited appeal to the logging industry because of its low timber yields.

By the time the Natural Resources Commission regional assessment came to town, an IPA was considered viable by both parties, and Commissioner John Williams listened with interest. He recommended that the entire forest – including areas the loggers wanted to keep – be handed over to the Wamba Wamba. And the then Labor government took his advice.

"I think I'm still pinching myself," Jeanette told Friends of the Earth. "Even though that's what I believed in and wanted, and in my own head didn't have any doubts that it could happen ... it's bigger than anything we've achieved before."

This is an edited version of an article that appeared in Chain Reaction - Friends of the Earth's national magazine in 2010.