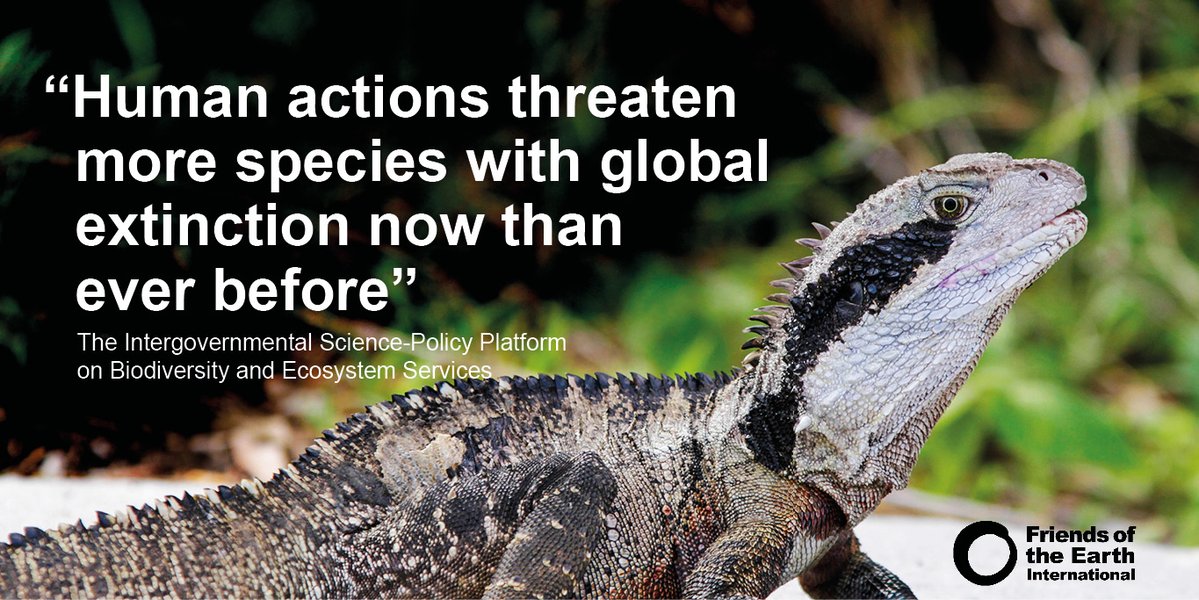 6 May 2019, Paris: The world faces ecological collapse and mass extinctions unless dramatic action is taken to change social and economic systems, according to a global assessment launched today by The Intergovernmental Science-Policy Platform on Biodiversity and Ecosystem Services (IPBES).

The IPBES report is the most comprehensive scientific global assessment on biodiversity and ecosystem services to be adopted by Governments. It exposes the main drivers of global biodiversity collapse and calls for urgent regulatory change.

The time has come to stop talking in terms of distinct crises, be it climate or biodiversity – and which is worse – rather we need tackle them all as one, with total system change, according to Friends of the Earth International’s assessment.

The report is unequivocal on the dire state[1] of the natural world and the fact that it is “human actions” that have significantly altered nature across most of the globe. The report says,

“Human actions threaten more species with global extinction now than ever before. Around 1 million species already face extinction, many within decades, unless action is taken to reduce the intensity of drivers of biodiversity loss.”

The report makes a compelling case for the need for “transformative change”, including changing global economic, financial and social structures. It rightly points the finger at the main drivers: industrial agriculture and fisheries, infrastructure, mining, energy extraction, logging, plantations and large scale bio-energy, together with endless growth and overconsumption.  All of which benefit the few while fueling poverty, violence, conflict and escalating environmental breakdown for the many. Sadly, despite its strong points, the report does not go far enough.

Nele Mariën, Forests and Biodiversity coordinator at Friends of the Earth International, explains,

“This report is yet another timely reminder that we are facing inextricably linked environmental and social crises. We can build a better world and arrest biodiversity collapse, but it needs nothing less than radical system change that breaks away from the broken capitalist economic model based on endless extractive growth, profit and inequality. We must break down all systems of exploitation – colonialism and neocolonialism, patriarchy and racism.”

“The report is bold and unflinching when describing the drivers of biodiversity collapse, but in order to tackle these drivers we have to name and confront the actors and power structures behind them, especially the immense power of corporations. There is overwhelming evidence of their central role in the destruction of the environment, peoples’ rights and democracy.[2] Large scale agriculture is rightly exposed as a leading culprit. The report should be the final nail in the coffin for the agribusiness-led food system. It is a liability we do not need – it does not feed us[3]. It is destroying our world and causing immense social conflict.”[4]

The report recognizes the leading role of agroecology to transform food systems but, yet again, not comprehensively. It fails to reflect the fact that agroecology requires social, ecological, economic and cultural transformation away from agribusiness control, by putting power in the hands of peasants and small scale food producers who feed 70 to 80 percent of the world.[5] This means rejecting false agribusiness solutions such as sustainable intensification which include genetically modified crops and their pesticides regime.

The report acknowledges indigenous peoples and local communities’ pivotal role at the frontline of defending ecosystems and protecting biodiversity often in the face of conflict over their lands and in confrontation with the huge power of corporations. It confirms that conservation managed by local communities and indigenous peoples is more effective at preventing deforestation and habitat loss than officially protected areas.

The report also confirms that more than 2,500 conflicts over fossil fuels, water, food and land are currently occurring across the planet and at least 1000 environmental activists and journalists were killed between 2002 and 2013.

“We need urgent protection of collective rights of indigenous peoples and local communities including access to and control of their own commons and livelihoods. We also need to learn from their ways of life and traditional knowledge systems,” says Rita Uwaka, Africa Forest and Biodiversity Coordinator, based in Nigeria.

Karin Nansen, Chair of Friends of the Earth International summarizes,

“We welcome the fact that this report is the first of its kind to highlight structural problems, to systematically examine and include indigenous and local knowledge, issues and priorities and to call for transformative change. Ecological collapse can only be avoided by system change. This can only be achieved by giving the power to the peoples in all areas, including agroecology, small scale fishing and community energy. Notably, Indigenous Peoples and Local Communities must have sovereignty to manage their territories, including to declare their territories free from development projects. Their rights and physical integrity must be preserved at all times.”

Friends of the Earth International will actively defend these ideas in the post 2020 process, which will define biodiversity policies for the decade to come in the Convention on Biological Diversity, the UNFCCC and the UN Committee of World Food Security.[6]

Karin Nansen, chair of Friends of the Earth International, Uruguay:

About Friends of the Earth International:

Friends of the Earth International is the world’s largest grassroots environmental network, uniting over 70 national member groups and some two million members and supporters around the world. We challenge the current model of economic and corporate globalisation, and promote solutions that will help to create environmentally sustainable and socially just societies: www.foei.org

[1] Additional facts from the report on the state of the natural world:

“75% of the land surface is severely altered, 66% of the ocean area is experiencing increasing cumulative impacts, and over 85% of wetlands (area) has been lost.”

“The global biomass of wild mammals has fallen by 82%.”

“An average of around 25% of species in assessed animal and plant groups are threatened with extinction.”

“Natural Ecosystem extent and condition has diminished by 47% on average.”

[3] International Panel of Experts on Sustainable Food Systems “From Uniformity to Diversity” http://www.ipes-food.org/reports/