Response to proposed changes to espionage and foreign interference laws 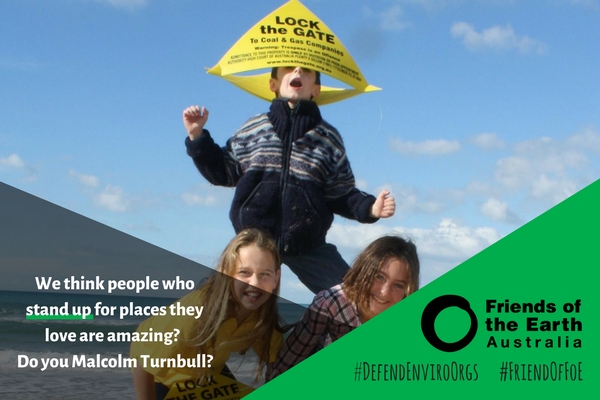 Friends of the Earth are a community-driven organisation that has played a constructive role protecting the natural environment and supporting social justice in Australia for over forty years.

Our work is supported by thousands of community members across the country and has been recognised by receiving the Premier of Victoria sustainability award.

While we understand the case to modernise Australia’s current espionage and foreign interference laws, the sweeping changes proposed by the Federal Coalition government are a clear case of overreach.

A government with a commitment to civil society, democratic principles, and free speech would go back to the drawing board and guarantee that the vital work of charities and community groups is not curtailed by amendments to espionage and foreign interference laws.

It is obvious that backbench MPs in the Turnbull government have inserted ideological opposition to charities and civil society into a piece of legislation about foreign interference. This politically motivated decision must be seen in a larger context: the relentless attacks by the conservatives within the Coalition on the ability of charities – especially environmental groups – to do their work. Most recently this has included attempts to limit the ability of charities to seek donations from overseas. This legislation compounds previous attempts to limit the activity of community groups.

It is deeply disappointing the Australian Labor Party express support for the sweeping changes proposed by the Coalition. An opposition with a commitment to a strong democracy and environmental protection would stand up to government backbenchers who have been bullying and intimidating community environment groups for years.

Friends of the Earth are deeply concerned that the proposed amendments fail to remove the threat to charities. For instance, the original bill risked sweeping whistleblowers, aid workers, journalists, and other not-for-profit workers into its net through its broad definitions. While the suggested amendment introduces a public interest defence for publication of secret documents, there is no guarantee it will protect charities from doing their work. And the breadth of the offence of sabotage, and in particular what amounts to "damage" to public infrastructure, has not been meaningfully improved. The potential for criminalising peaceful protest on measures of international importance remains real.

Australians understand that a healthy democracy requires strong independent voices – this Bill will undermine our democracy by penalising those community members who are brave enough to hold the government to account.

Charities who hold the Australian government to account on its human rights or environmental record in the international space could face criminal charges. Friends of the Earth and other environmental organisations could be charged with espionage simply for doing our job: protecting the natural world.

In addition to the Committee’s recommendations, the Bill must be further amended to provide full exemptions for civil society, so we can continue to hold the government to account without fear of prosecution or imprisonment.

We urge Australian Labor Party and cross bench senators to vote against the Bill unless this exemption is included.

The Australian Senate was designed to ensure checks and balances against government overreach. We call for senators to show leadership on an important issue that has implications for our democracy.

Friends of the Earth and other organisations will be closely tracking the Bill as it is considered by the Australian parliament.