Why FoE joined the ‘Change the Rules’ rally 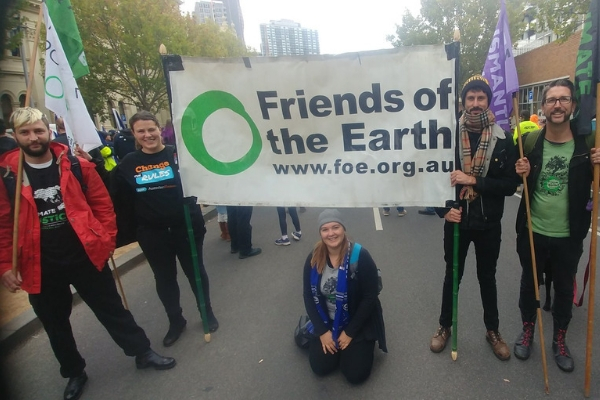 Community members flooded the streets around the country on April 10 demanding changes to industrial law and Friends of the Earth was there to support. But why does FoE fight for workers’ rights?

On Wednesday, April 10th, community and union members joined forces for better working conditions and higher wages all around the country. The ‘Change the Rules’ rally was organised by the union movement. As many as 100,000 people were gathered at the event in Melbourne CBD alone, making it the biggest of the day, reported The Age, and Victorian Premier Daniel Andrews was also witnessed supporting the cause with his presence.

Among the supporters marching the streets from Trader’s Hall in Carlton to Parliament House was Friends of the Earth.

We're proud to join other workers and community members at the #ChangeTheRules rally in Melbourne.

There will be no environmental justice without worker's rights. pic.twitter.com/b1VDqHk1VD

But, why does FoE care about workers’ rights?

The rise of collaboration

Cooperation between unions and environmental justice movements is nothing new. Occupational health issues started gaining attention already in the 19th century after alarming numbers of cases of lung cancer, black lung, lead and radium poisonings, and asbestosis were reported in factory workers. In the post-war era, there has been a rising number of campaigns fighting for both environmental and unions’ rights, of which the “war on workplace cancer” declared in 1980 by United Automobile Workers in the US is just one example.

Other famous campaigns (such as United Farm Workers’ against pesticide exposure starting in the late 1960s) as well as Rachel Carson’s Silent Spring, further fueled the fights for workers’ rights in terms of their physical environment. It was, in fact, as a reference to rights to protection against toxic hazards, that the term environmental justice first made its official appearance in the 1970s.

Here in Australia, similar campaigning has a long history. ‘Green bans’, where trade unions and other community members fight for not only workers’ rights, but for the preservation of built and natural environments, started already in the early 1970s. More recently, in 2016, Victoria announced its Renewable Energy Targets after a 2 year campaign by Friends of the Earth with some union support, also exemplifying the two interest groups uniting for a mutual battle for clean jobs and cleaner energy.

Friends of the Earth and workers' rights

“Far too often the interests of workers and environmentalists have been pitched against each other when fundamentally we share the need for a livable planet and societies based on environmental, social and economic justice,” says Karin Nansen from Friends of the Earth International.

Significant labor issues remain tightly linked to our environment and call for urgent changes. “Our state (Victoria) is undergoing profound change as the population grows, entire industries go to the wall, and climate change starts to really impact our landscapes, economy, and lifestyles. Yet Melbourne continues to sprawl, as low-density development covers valuable farmland and remnant vegetation, supported by transport infrastructure that will perpetuate our current reliance on cars,” Cam Walker, FoE’s Climate Justice spokesperson, wrote in 2018, emphasizing the importance of basing all environmental decision-making and policy on social justice principles.

Amazing crowd gathering here in Melbourne to #changetherules! @FoEAustralia are here in solidarity. No jobs on a dead planet @theddo96 pic.twitter.com/KQueWxoGIP

Although environmental and social justice are deeply enmeshed on many different levels, here are three examples why Friends of the Earth showed its support at the ‘Change the Rules’ rally.

1. Safe working conditions. Everyone has a right to clean air, and healthy places to work, live and enjoy themselves. FoE is, therefore, actively campaigning against the use of pesticides and other harmful chemicals. FoE is, also, currently working with the trade union movement on a new law to holding corporations accountable for environmental and Human rights abuses overseas, for safer and healthier work environments.

2. Just transition. It is important to be able to secure stable jobs for everyone and those working in dying industries, such as coal mines, are in a particularly vulnerable position. There can be, however, a just transition towards secure jobs, and Friends of the Earth is tightly working on the issue. Star of the South Energy Project, aiming to build Australia’s largest offshore wind farm, estimated to create thousands of jobs, is one example.

“Our thinking on this is that the offshore wind farm is not too far from Latrobe Valley, so some people who have been retrenched from coal mining might decide to go for jobs on the wind project. We are calling for the Latrobe Transition Authority to help make this happen through their worker transfer scheme,” Walker says.

“Some jobs will be specific to people with qualifications working offshore. However, with the offshore oil and gas production in Bass Straight peaking, there will be more and more unemployment there. So, the wind project will be perfect for these workers. We're working with the Maritime Union of Australia on this,” he continues.

3. And lastly, Friends of the Earth sees humans as part of nature. Environmental groups and organisations are traditionally not only engaged in issues dealing with the environment but are equally involved in human rights. Sam Cossar-Gilbert, spokesperson for Economic Justice in FoE, explains:

"We were proud to take part in the Change the Rules rally as we believe the struggle for environmental and social justice are entwined. It is the same corporations that exploit workers and destroy our environment. We are facing deep-rooted climate, social, and environmental crises but together we can build a fairer and more sustainable Australia.”

Losing the fight against climate change will have dramatic consequences for all communities and workers while acting on climate change will help secure ”a stable climate with decent work for all, prosperity, and development,” as Alison Tate, director of Economic and Social Policy, ITUC said.

If you have healthy people, you get a healthy planet.

For more information on environmental justice, check out Friends of the Earth International's website.

Written by Johanna Keskitalo who volunteers with Friends of the Earth.

Rector, J. (2014) Environmental Justice at Work: the UAW, The War on Cancer, and the Right to Equal Protection from Toxic Hazards in Post War America. Oxford University Press on behalf of the Organization of American Historians.