As the year moves forward, our calender's bulge and FoE events overflow as we continue to fight for a transformed world. 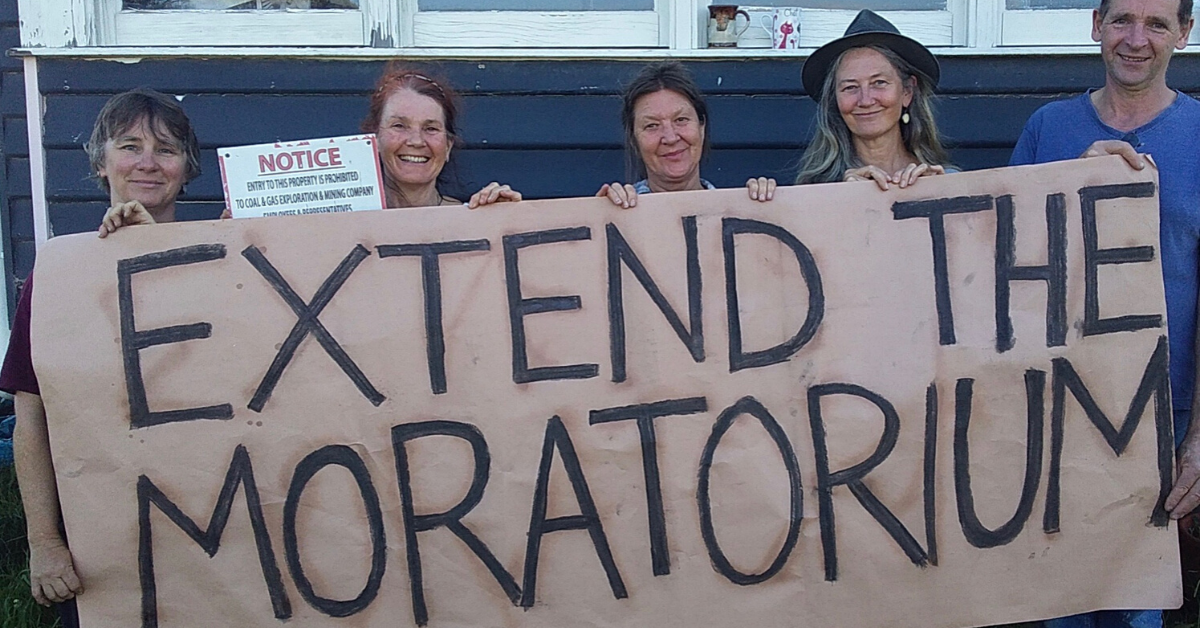 Since the bushfires, we have received beautiful messages and acts of solidarity and support from FoE groups across the world... FoE South Korea, FoE Sri Lanka, FoE Russia, FoE Nepal - to name only a few. It is a reminder of the beauty and breadth of our networks, and that it is the way we conduct our justice work that says everything, "Resistance is first of all a matter of principle and a way to live, to make yourself one small republic of unconquered spirit. You hope for results, but you don't depend on them.” (Rebecca Solnit)

Thank you for your ongoing interest and support. See below for many more ways to stand with us and get involved.

Friends of the Earth Melbourne has recently started a mutual aid project to figure out the best ways to help wildlife and support locals in bushfire affected areas. There's plenty of ways to help out and we're looking for anyone who can help either on a regular or one-off basis. We're currently looking for drivers, nest-box installers, wildlife feeders and also people to source food. This is a great opportunity to help those who have been affected by the bushfires, and to build relationships that can hopefully continue to grow into the future and be drawn upon if need be! To get involved visit FoE's Food for Wildlife page or email us at [email protected] 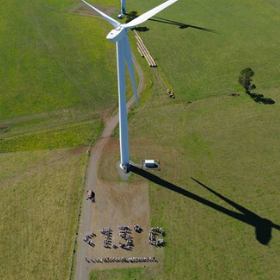 Will you lead the drive for less than 1.5°C?

Friends of the Earth Melbourne’s Act on Climate collective started the year full steam ahead and are set for a final few weeks of giving it everything we’ve got as the end of a three-year campaign approaches. The Andrews government is just weeks away from deciding on what Victoria’s first Emissions Reduction Targets (ERTs) for 2025 and 2030 will be, and time is running out to make the case for targets that will keep global warming below 1.5°C.The summer bushfires and the impact they’ve had on communities, first responders, wildlife and the natural world have shown what’s at stake if we fail to tackle the climate crisis. And that awareness inspired us to ramp things up in February. From distributing a statement from Bushfire Survivors for Climate Action to MPs on the steps of Parliament to coordinating two human signs - one on the doorstep of Premier Andrews’ electorate of Mulgrave, and one at the iconic Hepburn Wind Farm, we’re doing everything we can to ensure the Premier hears the call loud and clear for science-based ERTs.Now on the home stretch, we need everyone on deck! If you live in Victoria, you can sign up here to join our final Week of Action for Victorian Climate Leadership. You can add an action that calls for science-based ERTs with any group you’re part of, or participate in actions we’re already planning like 100 Laps for Climate Leadership. Let’s rock!

The federal government's decision to site a national nuclear dump at Kimba on SA's Eyre Peninsula is being fiercely contested by the Barngarla Traditional Owners, who are unanimous in their opposition. An article about the controversy by FoE's Jim Green and Sister Michele Madigan is posted here. 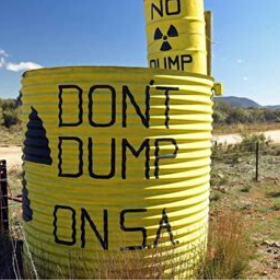 For over 30 years Friends of the Earth has been running Rad Tours to South Australia so people can experience first-hand the social and environmental impacts of the nuclear industry. South Australia has experienced British nuclear bomb tests, extensive uranium exploration and mining, and is currently being targeted by the federal government for a national nuclear waste dump. And some are still lobbying to turn SA into the world's dump for high-level nuclear waste.
We will visit uranium mining and waste dump sites and speak to communities affected by the industry. We will also visit some of the beautiful places in SA including the Flinders Ranges and Lake Eyre. We prioritise places for people who are involved in anti-nuclear campaigning or who are interested in getting involved. More details here. If you're interested in coming, please fill out this online form and then we'll get in contact with you Corporate Scumbag Trivia

Join Friends of the Earth Melbourne for a night of trivia and laughs as they expose the corporate scumbags that are causing the climate crisis and raise funds for Friends of the Earths campaigns for social and environmental justice! Get thinking: Who are the mining companies, big businesses, talking heads of political parties and outspoken proponents of toxic & extractive industries? Who are their mates, their philanthropic arms, their greenwashing pals? How have we disrupted, exposed and embarrassed them through create community resistance? Who are the radical ratbags taking on these corporate criminals? Join the night of fun!

A recent visit to South West Victoria has deeply troubled Friends of the Earth. Perhaps the most haunting image of the crisis facing koalas in the region was a mother and baby holding on to a dead bluegum plantation tree, as Wedge Tail Eagles circled overhead. Thousands of similar scenarios are playing out across the region at present time. The plantation in question had been logged about one year ago. Read more about this unfolding story and take action here. 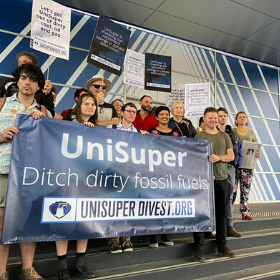 Market Forces UniSuper DIVEST campaign has hit a major milestone with over 10,000 UniSuper members having signed the open letter calling on the fund to divest from climate-wrecking coal, oil and gas companies! Last week they made sure this campaign received the exposure it deserves by publishing the open letter as a full page ad in the Australian Financial Review. The ad was seen by around 300,000 people!But the amazing UniSuper DIVEST campaigners didn’t stop there. A group of UniSuper members from Canberra went along to the UniSuper-sponsored Universities Australia Conference yesterday morning. They greeted conference attendees with free copies of the AFR, as well as campaign flyers, posters and a banner. Check out our video wrapping up the action here, and media coverage in the Sydney Morning Herald, Yahoo Finance, Bloomberg and Financial Standard.

Defending the moratorium on gas drilling in Victoria

A strong and determined community campaign from 2011 til 2016 saw Victoria declare the first permanent ban on the process of fracking to extract gas from the ground, and an ongoing moratorium on exploration and drilling of onshore conventional gas.  The moratorium will expire on June 30 this year, unless we can mobilise the community to defend this important win.  It’s easy to add your voice -- Sign the petition to the premier urging him to #ExtendtheMoratorium. Take a photo and post it (tagging in key MPs). Details here. 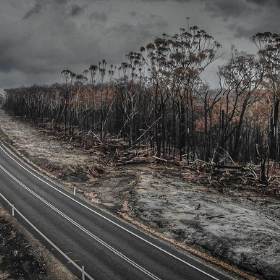 Post fire road clearing in VIC. Is it salvage logging by stealth?

After this summer’s devastating fires, roads and tracks need to be made safe for travellers and the general public. The authorities have put enormous effort into getting highways and major roads opened quickly.However, many residents and tourists in East Gippsland have expressed dismay atthe extent of tree clearing along hundreds (possibly thousands) of kilometers of roadside reserves in the aftermath of the bushfires. Many of these roadsides contain extremely valuable habitat.There are short stories on the clearing available here and here. 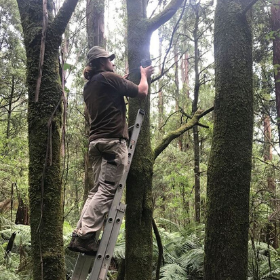 30 people recently joined Wildlife of the Central Highlands (WOTCH) to survey for the critically endangered Leadbeater’s Possum and the threatened Greater Glider. They deployed remote cameras by day, spotlighted by night, and even managed to squeeze in a visit to the breathtaking Kalatha Giant. The spotlighting sessions were a huge success, with our volunteers spotting several Greater Gliders and (most excitingly of all) a Leadbeater’s Possum! As it was found in a logging coupe, this detection will trigger a 200m protective buffer around the location of the sighting. A huge thanks to everyone who has helped WOTCH on the ground and throughout the court case. $50,000 was raised to protect unburnt bush, and the threatened species that call it home!

How can public transport help with climate change?

Transport is the second biggest Greenhouse Gas (GHG) contributor in Victoria, making up 20% of total GHG emissions. It will soon overtake even the energy sector in emissions. Meanwhile, it makes up 18.8% of the total GHG emissions in Australia, making it the 3rd biggest contributor in the country. The transport sector has experienced the largest growth (64.9%) between 1990-2019. We must urge our leaders to reduce GHG emissions through a better transport plan! Here's what Sustainable Cities proposes for revolutionizing and decarbonizing our transport sector.